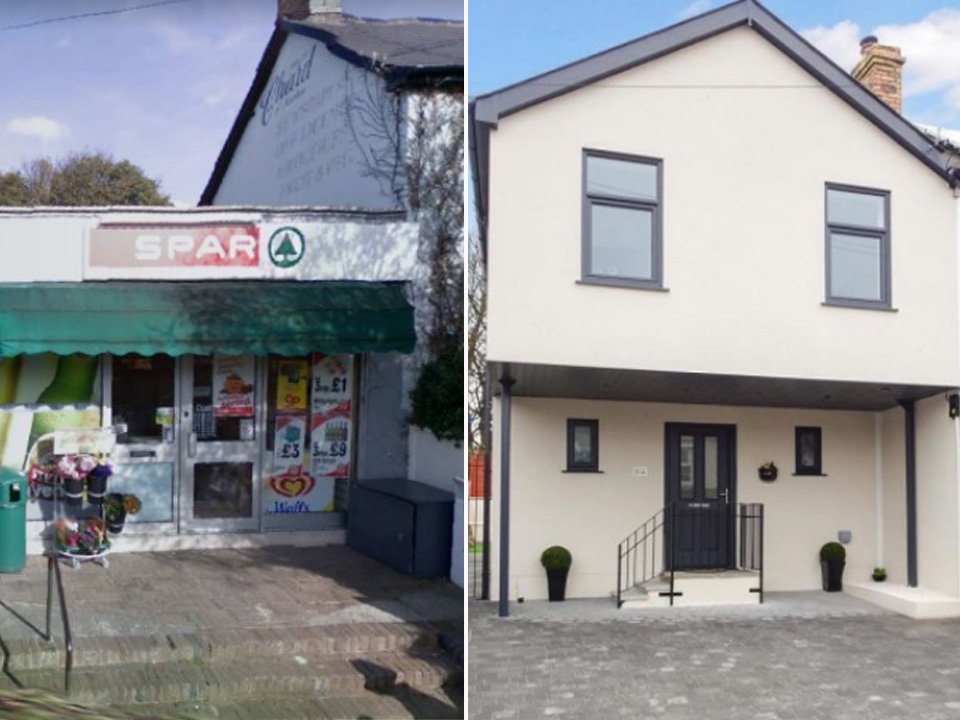 A woman has transformed the site of an old Spar corner shop into a beautiful, bright new three bedroom home.

Have you ever seen an old Spar and thought about what an appealing real estate opportunity it could be?

She said: ‘When I saw it, I instantly knew we had to buy it.

‘For many years, I’ve had a fascination for old buildings, especially buildings with some history behind them, and it’s always a bonus if it is located in a conservation area, as much of the original character and features remain.

‘Four years ago we renovated a hayloft on Clevis Hill, just up the road from the Spar, so we already had a feel for the area.

‘Initially I knew we could design something with a contemporary feel which would fit in with the character of the existing properties in the village, a place that includes a variety of designs.’

Even though there was a leaky roof and soil pipe, Elizabeth, who hails from Port Talbot, saw potential, and couldn’t wait to get stuck in.

She said: ‘It was totally derelict, with no amenities, very dark and dingy, extremely wet, but I couldn’t wait to get started.

‘Friends and family thought we were mad, and couldn’t believe we were taking on another project involving a derelict building.

‘Overall the residents in the local community were extremely pleased that the building was going to be restored from its derelict condition.’

However, before she could get started, Elizabeth, 55, needed to have a chat with the local authority’s planning department.

She said: ‘The process generally ran smoothly, there were certain challenges as the design had to meet a certain criteria set out by the planning department.

‘This involved, for example, adhering to certain design of bricks, tiles and colour of rendering which was in keeping with the local area. The overall process took approximately two months to conclude.’

There was also the pandemic to contend with, and the whole demolition and building project ended up taking around seven months.

Indeed, the whole site was demolished, a new foundation laid and, because the Spar has been attached to the property next door, they also needed to separate the drainage system between the two buildings.

Elizabeth said: ‘Due to the close proximity of the neighbouring property, a party wall agreement had to be put in place too which ensured certain stipulations were met which served everybody’s interests.

‘However, the main challenge then appeared in the form of COVID-19 and building had to stop.

‘This delayed the project for a considerable amount of time as not only did our builders refrain from working, but there was also a dearth of building materials when they eventually resumed as the building suppliers had no stock.’

When the pandemic finally allowed, Elizabeth began to see the fruits of her labour take shape.

She said: ‘I wanted to create something with a coastal feel, being so close to Newton beach, so we discussed the matter with our architect Peter Lee and tasked him to design a property encompassing this. He came up with the boathouse design and that’s how it evolved.’

Her ideas and Peter’s design expertise resulted in a two-storey home with the upper floor overhanging the first.

On the ground floor, a large hallway is the first thing you see when you enter the home.

Glass doors and windows form an L shape around the garden, framing the open-plan living and kitchen area and giving it plenty of light.

Elizabeth said: ‘I wanted an open-plan design with a contemporary feel. The kitchen is of linear design and I feel it is the perfect fusion of functionality and style.

‘The units are lacquered high gloss in light grey, with integrated handles J-Pull style, and marble effect work surfaces and I think its sleek design sits seamlessly within the room.’

The ground flood bedroom has bi-fold doors which open out onto the garden terrace, an ensuite, and underfloor heating.

Elizabeth says: ‘My favourite space is the open-plan kitchen overlooking the garden that oozes tranquillity, but maybe my favourite feature is the locality – being so close to the sea and situated in an area of so much history and character.’

Elizabeth was keen for the property’s history to have a place in its present, saying: ‘After purchasing the property we were reliably informed that the first ever owners of the store were known as Mr and Mrs Chard so, as we wanted to retain some of the history, we named it Chard House.’

Elizabeth, who has finished a number of renovations in her time, also shared some advice for others looking to renovate an older building.

She said: ‘Speak to as many people as possible who have been involved in property developing, get as many quotes from builders as possible and have continuous dialogue with the builder you choose.

‘Always make sure there is a contingency budget in place, use all available resources to obtain the most competitive prices of materials, have nerves of steel and be prepared for the unexpected.’

She said her family and friends have been amazed by her newest renovation, and the locals have been supportive of her endeavours too.

Elizabeth said: ‘They seem very happy, as in recent years the area was becoming extremely busy with the shop attracting increased footfall and traffic, as well as delivery vehicles attending the premises at all hours of the day.

‘With Chard House, we feel we have helped transform our area of the village and enhanced the value of neighbouring properties, especially with its shape and individuality – there is no other one like it.

‘I feel extremely relieved and proud and can’t wait to do it all again. I’m already looking!’

Chard House is for sale for £495,000 with Thompsons Estate Agents, Porthcawl.