It starts small: A pair of plucky young Brits crash a packed Manchester rally for the British Union of Fascists (aka blackshirts) to literally sing out their disaffection for a political movement they refuse to support. They’re kicked around, tossed out, thrown into prison, where the worst thing they have to endure is their bickering parents who object to their burgeoning romance. For better (and, occasionally, for worse), Peter Bowker’s PBS series “World on Fire” is dedicated to following the interconnected lives of a select handful of people thrown into the tumult of World War II.

Hopscotching across England, Germany, Poland, and France, “World on Fire” tracks the first year of the war, a complicated and horrifying rise that often hinges on the sense that things aren’t so bad, or that they may not get worse, or that the hints that something far darker is occurring aren’t just distasteful rumors. Predominantly focused on normal people — a singer, a journalist, a doctor, a musician, a petty criminal, a widow, and many more — pushed into the extraordinary circumstances of a war they could not ever hope to stop, “World on Fire” offers a more intimate exploration of wartime life than is typically portrayed in World War II dramas.

Still, Bowker’s expansive limited series often bites off more than it can chew, bouncing from storyline to storyline in rapid-fire manner, with some subplots given damningly short shrift before its time for the next one. Others are needlessly expanded on, like the love story that kicks off the series and binds young interpreter-turned-solider Harry (Jonah Hauer-King) to prickly singer Lois (Julia Brown) in ways that only further the narrative, never the emotion between the two. Still, the dense episodes — seven in total, each stretching nearly an hour — do eventually give way to satisfying character development and fresh complications.

And, strange as it might sound, the bent toward seemingly petty stories (who can care about an ill-fated romance in the face of so much other trauma?) keeps the focus firmly on the other cost of war: the end of regular life, normal worries, everyday cares, possibly forever. Harry and Lois’ romance might make a strange focal point, but it helps spin the story off into a variety of often intriguing directions, though Bowker’s series (which he wrote every episode of) does take its time digging into some of the other characters that populate it.

Not every connection is a hit, either, and some of them feel contrived and unnecessary, while others add great emotional impact to the series and its many characters. It’s (mostly) immaterial that doctor Webster (Brian J. Smith) is journalist Nancy’s (Helen Hunt) nephew or that erstwhile British solider Tom (Ewan Mitchell) refuses to help Polish stranger Grzegorz (Mateusz Więcławek) in a pivotal moment, but it’s essential to the thrust of “World on Fire” that fussy Robina (Lesley Manville) is forced to care for young refugee Jan (Eryk Biedunkiewicz) or that Nancy lives next door to the Rosslers, a German family with a big secret.

“World on Fire” isn’t concerned with judging its many characters, though it never shies away from marking divisions between them. Some of those camps are carved out early — like the people who see what’s coming (including Harry, Lois, and Nancy) and those who don’t (like Webster or Grzegorz’s sister, Kasia) or who simply fail to care about what it means (Robina) — while others emerge over time. By the third episode, free of the first two episodes’ reliance on table-setting, most of the characters have settled into their place in the story, and “World on Fire” is able to more firmly settle into its rhythms.

Strong performances aid matters, particularly Manville as Robina, Harry’s cold mother who is gifted with one of the series’ most fascinating arcs, along with Zofia Wichłacz’s Kasia, introduced as the third member of Harry and Lois’ love triangle who emerges as one of its best and most complicated characters. Sean Bean appears in a heartbreaking turn as Lois and Tom’s father, battling back his own beastly memories of World War I, while Hunt’s spiky American journalist Nancy beautifully endures heartbreaks of both the professional and personal variety.

Such characters also allow “World on Fire” to dip into other under-explored elements of wartime crisis, like what happens to women during bloody conflicts and how mental health issues are often present and wholly misunderstood. The series’ inclination toward investigating such pockets is one of its greatest strengths, and audiences that hang in through its more middling early episodes will be rewarded for their patience. 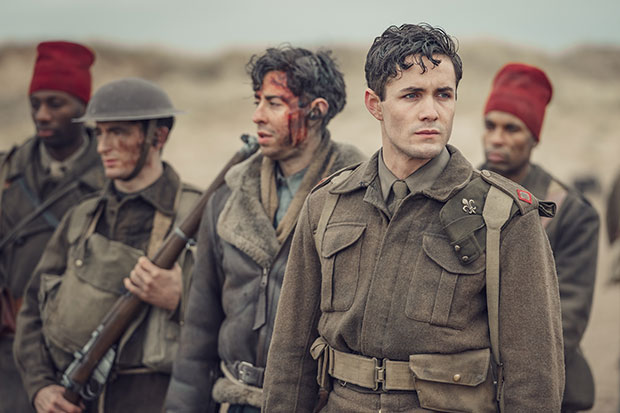 The series’ modest effects work and a limited collection of settings also improve as the series winds on. By the fifth episode, “World on Fire” has moved away from the handful of interiors (many of them the personal abodes of its characters) into a more full-bodied survey of its world. It even makes off with a few big battles, including a key section that takes place at the battle of Dunkirk (and, of course, brings together a number of its characters) and various travels made by Harry, Lois, Tom, and Nancy as the world around them expands (and, in some ways, frightfully contracts).

At its heart, however, “World on Fire” is about how both everyday heroes and villains are born, made, or shaped just so in the face of horrific events. It’s about how people survive, or don’t, or help others, or don’t. It’s about how “normal” is just an idea, a fleeting one at that, and every day that idea can change, sometimes into something better, more often into something worse. It’s about World War II, but it’s also about now, and maybe even what’s to come next.

A second season of the series has already been ordered, all the better to help ease anxious viewers after a stellar season finale wraps up certain storylines and drops major bombs into others. The war, it seems, will always rage on.

“World on Fire” premieres Sunday, April 5 at 9 p.m. ET on PBS Masterpiece. New episodes will air every Sunday thereafter through May 17.