More than 15,000 pairs of donated socks have passed through the hands of Benjy Orwin over the past 3½ years and about 800 of them have now made their way to residents of the storm-battered Dandenong Ranges.

“They really need it,” Benjy said. “It’s really hard for them.” 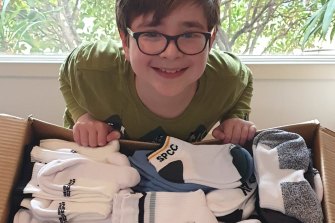 Benjy Orwin, 11, with some of the thousands of pairs of socks he has helped donate.

“People look at what’s going on and think, sure, it’s a little bit wet and things are damaged, but it’s OK. But the real picture is much more serious than that.”

The 11-year-old’s charity, Socks4Support, has been collecting socks at donation bins spotted throughout Caulfield.

People drop socks into bins at Coles, Woolworths, his school and the office of local MP David Southwick and Benjy takes them to charities throughout the city.

While Benjy usually supplies to charities that help Melburnians who are sleeping rough, he was struck by the extraordinary scenes of devastation in the Dandenongs. 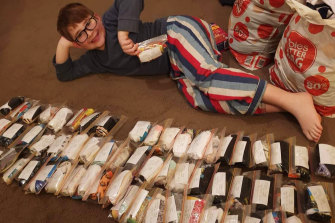 “I just thought that socks are something that are very important for people,” he said.

“They were something a lot of the people were desperate for,” he said. “When I found out, I really wanted to help. I thought it was a desperate situation.”

“Their socks get damaged very easily in places like that.”

“I just thought that socks are something that are very important for people,” he said. 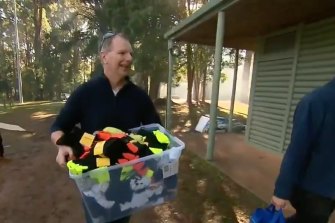 Mr Southwick, who contacted Benjy to see if he had any socks for residents in the Dandenongs, took carriage of the cargo and made the trip to the Dandenongs on Sunday.

“When I visited the area on Friday I asked, ‘is there anything you don’t have that you need?’ and their response was socks,” he said.

“A lot of people were walking around with wet socks and without the power to dry them. I thought: I know exactly where I can get my hands on some.”

Benjy has donated the majority of the socks he has collected to charity Avalon, which has received between 8000 and 9000 pairs.

He has also donated to residents of the public housing towers that were subjected to the hard lockdown in North Melbourne and Flemington, and made a special trip overseas to deliver socks to children in South Africa.

Benjy is hoping he’ll be able to collect more socks and send another batch to those struggling in the Dandenongs.