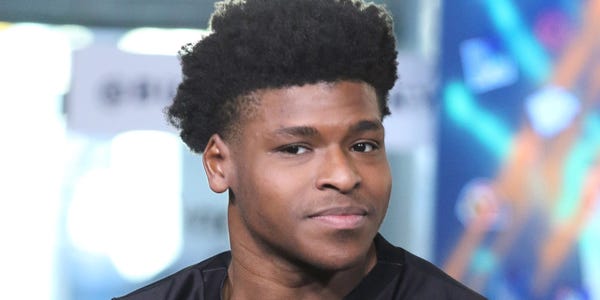 "Cheer" star Jerry Harris admitted during an interview with authorities that he sexted a 13-year-old boy and asked him for nude photos on Snapchat, prosecutors said in a criminal complaint outlining charges.

Harris, 21, was arrested on Thursday and charged in a federal court with producing child pornography in connection to the allegations.

While he's only been charged in connection to allegations stemming from one minor, prosecutors said in a criminal complaint made public by the Department of Justice on Thursday that Harris admitted to "soliciting and receiving child pornography on Snapchat from at least between 10 to 15 other individuals he knew were minors."

Prosecutors say Harris was involved in the alleged misconduct from December 2018 to March 2020.

Allegations against Harris were first made public earlier this week when twin 14-year-old brothers told USA Today that their family had brought a civil lawsuit against Harris in Texas.

The twins, only identified as Charlie and Sam, and their mother provided USA Today with screenshots of Snapchat conversations with Harris that are identical to screenshots found in the criminal complaint.

"It was just eating me alive," Charlie told USA Today. "It was just making me so gross and uncomfortable. Every time I saw his name or something like that, I was just cringing about it."

During an interview with law enforcement agents, Harris admitted to asking one of the minors for a photo of his "booty" and penis. He also admitted to attempting to engage in oral sex from one of the boys.

Harris appeared in court on Thursday afternoon. A representative for Harris did not immediately respond to Insider's request for comment.

"We categorically dispute the claims made against Jerry Harris, which are alleged to have occurred when he was a teenager," a spokesperson for Harris said in a statement to Variety on Monday, responding to the initial allegations of sexual abuse. "We are confident that when the investigation is completed the true facts will be revealed."

Harris is currently behind bars, but his attorney said he will ask for him to be released over concerns of the novel coronavirus, according to CNN. He said Harris has asthma, which could put him at a higher risk when it comes to symptoms of COVID-19.

Harris was one of several students from Navarro College featured on the Netflix documentary series "Cheer," which gave an inside look into the school's cheer leading team.