Washington: The legal tug-of-war between Texas abortion providers and the state's leaders who want to ban the procedure during the coronavirus pandemic has landed at the US Supreme Court.

Twice, a Texas district judge has agreed with the providers that the state's prohibition of medical procedures that are not "immediately medically necessary" cannot be enforced against the time-sensitive and constitutionally protected right to abortion. 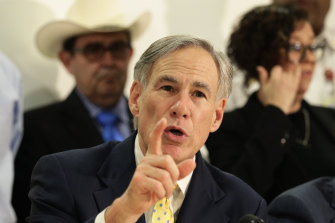 And twice, a panel of the US Court of Appeals for the 5th Circuit has intervened. In its ruling Friday, the panel said on a 2-to-1 vote that only women who might not be able to receive an abortion before the state's 22-week limit could receive a waiver.

Abortion providers, represented by Planned Parenthood and the Centre for Reproductive Rights, among others, said the Supreme Court's intervention "is urgently needed."

"Virtually all Texas residents with unplanned pregnancies are unable to access early abortion care through medication abortion and must instead wait until they reach a more advanced stage of pregnancy," their petition to the court said. "Delaying abortions by weeks does nothing to further the state's interest in combating COVID-19, and indeed runs directly contrary to that interest: individuals will require more health care – even in the short-term – if they remain pregnant than if they have a desired abortion, and some will engage in risky, out-of-state travel in an attempt to access earlier abortion services, thus increasing contagion risks in the midst of a pandemic."

Governors around the country have issued similar orders, and judges in Alabama, Ohio and Oklahoma said the restrictions could not be applied to a woman seeking an abortion.

US District Judge Lee Yeakel in Austin has ruled the same way. First, he said the ban could not apply to abortions. After a panel of the appeals court told him to dissolve his order he issued a new one at the bequest of abortion providers, saying the ban would not apply to women seeking abortions induced by medication and those who would soon not be able to obtain an abortion at all because of the state's 22-week deadline.

The panel again disagreed. The judges let the ruling stand regarding women close to the deadline, but not to those seeking a medication abortion.

Abortion rights lawyers say that procedure, allowed up to the 10th week of pregnancy in Texas, involves the woman taking two pills and does not require providers to use much, if any, of the PPE the state wants to conserve.

The providers say the risk is extremely rare, and the state is using the pandemic to further its long-running battle against abortion.

"This is an extraordinarily difficult time, but this is an easy case," said Nancy Northrup, president of the Centre for Reproductive Rights. "Texas is blatantly abusing its emergency power to obliterate Roe v. Wade."

The providers asked the court to set aside the appeals court decision and reinstate Yeakel's most recent temporary restraining order.