Mother, 35, ‘who was alcohol dependent’ died during family caravan holiday after not eating or drinking for days because of a stomach bug, inquest hears

A mother who was suffering from a sickness bug died suddenly while on holiday with her family in Porthcawl, an inquest has heard.

The family had been suffering with a tummy bug before they were due to go away, and Ms Rees had been saying she felt sick from around March 3, 2019.

She later travelled to Trecco Bay Holiday park with her partner, John Davies, her daughter and the couple’s son.

Her inquest heard that Ms Rees suffered a range of illnesses, such as anxiety, bipolar disorder, body dysmorphic disorder and alcoholism.

The inquest heard Ms Rees had ‘turned to drink’ in the past and had not eaten for drank for several days before her death.

A pathologist said alcohol-related ketoacidosis contributed to her death. 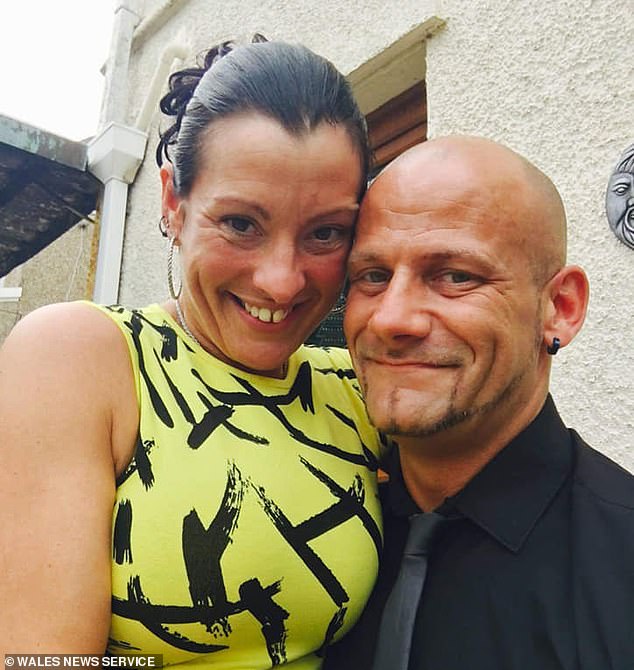 Eleanor Rees, pictured with her partner Jonathan, right, complained of feeling ill several days before her death in March 2019

The inquest – at Pontypridd Coroner’s Court was told Ms Rees, had been in a relationship with Mr Davies for around eight years, and as the relationship developed he became her main carer.

The coroner heard Ms Rees, from Swansea used alcohol to deal with her mental health problems, and would drink two cans a day or maybe a bottle of wine during the evening, but other times it would vary.

Mr Davies told the hearing: ‘It would depend on her mental state of mind.’

Mr Davies said she also started to develop issues with her body following the birth of their son.

He said: ‘She found that difficult. She didn’t like the way she was after she was pregnant. 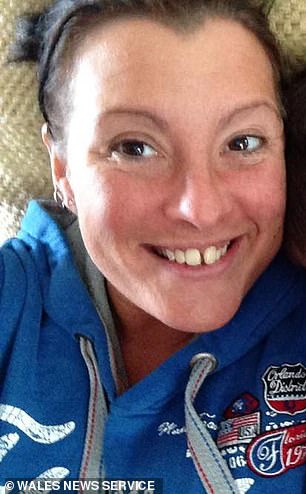 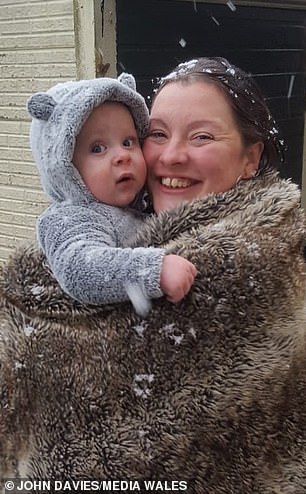 ‘There were times when she would take laxatives because she was feeling overweight.

‘Even when she was a size eight – there was one point she went down to a size six and I said “enough love – please stop this”.’

Mr Davies told the court they booked the holiday to Porthcawl in the January of 2019 as it was a way to ‘bring the family together’, and to spend some time somewhere different.

He admitted before they left Ms Rees said: ‘I don’t want to go’, because she had come down with a stomach bug, but he claimed this sort of hesitance was usual behaviour due to her anxiety.

When they were travelling in the car on March 4 the hearing was told she brightened up a bit, and started bobbing to the music and lip-syncing.

But when they arrived at the caravan park she continued to feel unwell, and complained of being tired and didn’t want to eat anything.

When she continued to feel unwell and stayed in bed on March 5, Mr Davies initially called Manon Griffiths, his partner’s clinical psychologist, because he thought the illness may also be linked to her anxiety.

He told the inquest he was advised if her symptoms were to get any worse then he should call an ambulance, but Ms Griffiths said she advised him to do this anyway.

Emergency services were not called until later in the day, and Ms Rees’s daughter began to grow rapidly concerned as the day went on.

A statement read on behalf of Ms Rees’s daughter said: ‘I think it may have been 4.30pm to 5pm I rang my gran because I was worried about mum.

Later Mr Davies went back in the bedroom to check on his partner, but he called for help because she didn’t look right.

The inquest was told he asked her daughter: ‘Does mum look right to you?’

Describing what Ms Rees looked like at the time, Mr Davies said: ‘I could feel her hand feeling quite cold and clammy. I could see her hand going blue.

‘I could see around her lips were blue. At the time she was breathing.’

Despite the help of the emergency services Ms Rees died that evening.

Ms Rees’s medical history revealed she had been diagnosed with bipolar disorder, borderline personality disorder, anxiety and had been known to be alcohol dependent.

Dr Griffiths, who had worked with Ms Rees to support her with her mental health, said:  I feel we had a really good relationship.

‘She found it difficult to accept her own body.

Dr Griffiths said they had discussed ideas as to how to try and combat her issues with alcohol, but she was honest about it when she was struggling.

She also insisted her advice was to call for an ambulance on the day John called her to tell her she was unwell.

‘I felt he would have been able to make the choice,’ she said.

‘So I didn’t think about calling an ambulance on their behalf.’

Despite attempts from the paramedics who arrived at the scene, Ms Rees later died.

When police arrived at the scene officers confirmed there were no suspicious circumstances, and Ms Rees did not appear injured in anyway.

Pathologist Dr Maurizio Brotto told the inquest, after examining the body, evidence as to what caused the death seemed to be in keeping with fatality arising from alcohol-related ketoacidosis.

Ms Rees hardly ate or drank, aside from a little water, in the days leading up to hear death due to the stomach bug, which would have had an impact.

Dr Brotto told the hearing if an ambulance had been called between the Sunday and Monday morning it could have been possible Ms Rees had a chance of surviving.

Coroner David Regan accepted that the death was in keeping with signs of ‘fatal ketoacidosis’ as a result of alcohol withdrawal, but said Mr Davies did not show any neglect as a carer.

Mr Regan said: ‘I accept as a finding of fact that Mr Davies was advised to call an ambulance by Dr Griffiths. Mr Davies is not a clinician.

‘He had sought other assistance by calling Dr Griffiths even though he didn’t follow her advice.

‘I will record a conclusion that Eleanor died an alcohol-related death.’