Angela Merkel is 'definitively a lame duck' after lockdown U-turn

Angela Merkel is ‘definitively a lame duck’ after she was forced to make a humiliating U-turn by scrapping plans for a strict Easter lockdown, a former German government spokesman has said.

Bela Anda, a press secretary under Merkel’s predecessor Gerhard Schroeder, said Merkel had seen her power ‘eroded’ by the fiasco – with her party’s poll ratings in freefall six months before an election which will determine her successor.

Merkel asked the German public for ‘forgiveness’ at an astonishing press conference on Wednesday where she said the widely-criticised plan for a total shutdown over Easter had been ‘my mistake, and my mistake alone’.

‘The political world in Berlin will draw the conclusion that from today, Angela Merkel is definitively – I’m sorry to say it – a lame duck,’ Anda told Bild last night.

‘It’s certainly clear that a decision which is made and then not implemented means an erosion of power for Merkel from today onwards’. 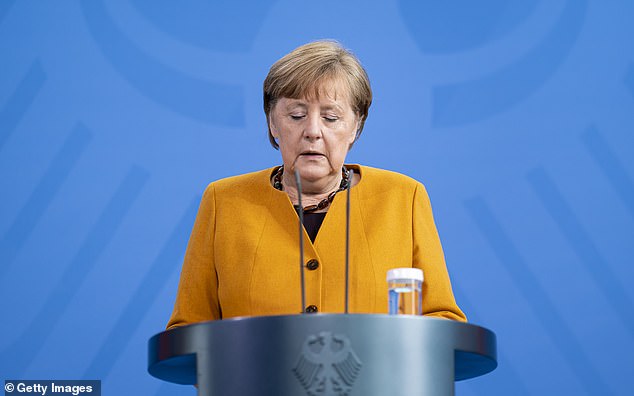 Merkel, who has steered Germany and Europe through a series of crises in her 16-year term in office, announced in 2018 that she would not seek re-election this year.

Only a few months ago she seemed set to leave office at the peak of her powers after winning high marks for her early handling of the pandemic.

But public confidence has ebbed away amid a long winter lockdown which has failed to push infection rates low enough to allow for a re-opening.

Now, cases are on the rise again – while vaccines are coming too slowly to protect a large chunk of the population against getting sick with Covid-19.

Germany’s vaccine distribution has been hampered by a series of problems including public reluctance to take the AstraZeneca vaccine.

Only 9.2 per cent of Germany’s population has received a first dose of a vaccine so far, compared to 41.7 per cent of the total population of the UK.

The proportion fully vaccinated in Germany, at 4.1 per cent, is barely higher than Britain’s 3.6 per cent despite the UK virtually abandoning second doses for weeks.

Some German politicians have called for Berlin to turn to Russia’s Sputnik V jab to speed up the roll-out, but EU regulators have not yet given a ruling on the vaccine.

The slow progress means that most of Germany’s population is still vulnerable to Covid-19 as the third wave takes hold, blamed partly on the British variant.

Weekly cases have risen above 100,000 for the first time since January, with 100,912 infections added to the tally in the last seven days. 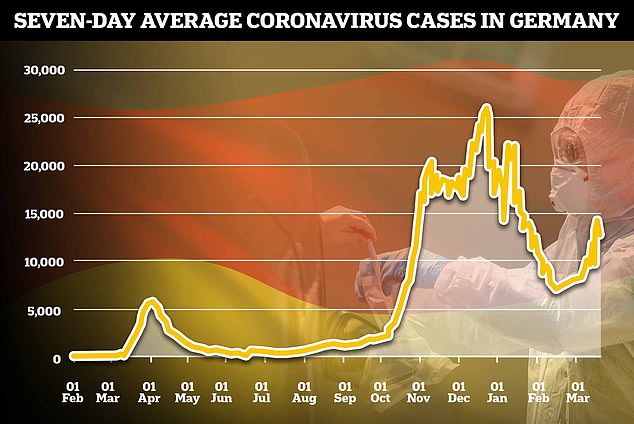 Germany’s infection rate has rocketed upwards again in a resurgence blamed partly on the British variant of the disease, with cases once again topping 100,000 per week 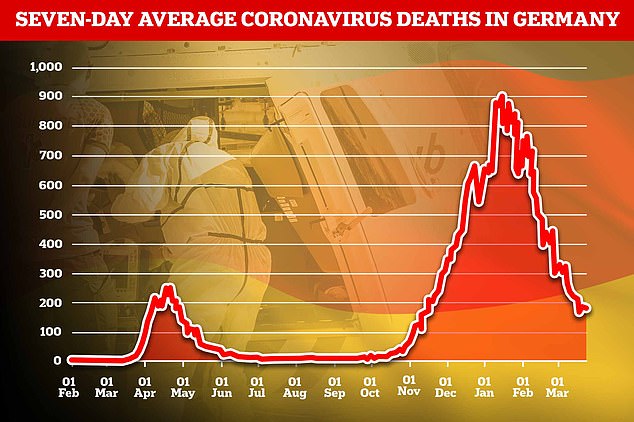 The death rate is lower than at the winter peak but its decline has stalled in recent days, with daily figures almost identical to those a week ago

Merkel and state leaders held marathon talks on Monday where they agreed a five-day lockdown over Easter where even grocery stores would have been largely shut.

But it drew massive criticism from all sides, including businesses and medical experts, and Merkel conceded on Wednesday that the plan was not achievable.

‘I take the final responsibility for everything,’ Merkel said, adding that ‘a mistake has to be called a mistake, and above all it has to be corrected’.

‘I know that this whole process has caused additional uncertainty. I regret that deeply and I ask all our citizens for forgiveness,’ she said.

While party colleagues praised Merkel for taking responsibility for the fiasco, her statement led to calls for a confidence vote in the Bundestag.

And despite the U-turn, nearly 40million Germans could still face strict new measures including curfews and compulsory mask-wearing in their own cars.

Monday’s talks ended in an agreement that the ultra-strict measures would apply to areas with an infection rate higher than 100 cases per 100,000 people in a week.

But nearly half of Germany’s 412 administrative districts are already above this threshold, including cities such as Frankfurt, Cologne and parts of Berlin.

Local authorities have the final word on restrictions, but the measures recommended by Berlin such as curfews and masks in cars would be the toughest imposed in Germany during the pandemic.

‘The situation is serious. Case numbers are rising exponentially and intensive care beds are filling up again,’ Merkel said after the talks on Monday.

Still, one state announced today that it would lift the lockdown from April 6, re-opening cinemas, theatres, concert halls and outdoor dining.

The measures in the state of Saarland would allow up to 10 people to meet in public after Easter, defying Merkel’s calls for caution. 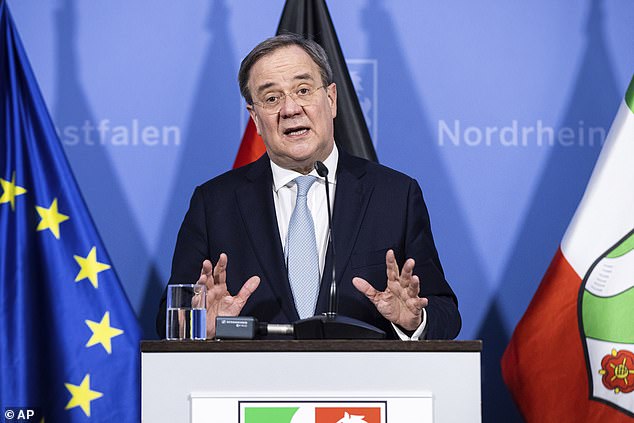 Merkel’s Christian Democrats elected Armin Laschet (pictured) as their new leader in January, putting him at the top of the list of potential successors to Merkel 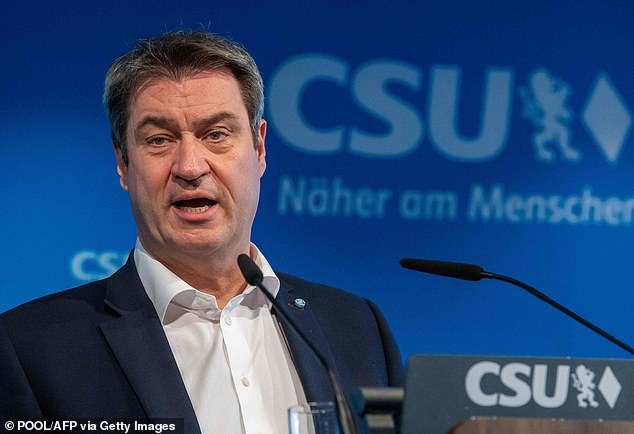 Markus Soeder (pictured), the leader of the Bavarian sister party to Merkel’s CDU, could also throw his hat into the ring ahead of September’s election

Even before the latest humiliation, Merkel’s party had slumped in the polls and took a kicking from voters in two regional elections earlier this month.

Merkel’s conservative bloc scored just 26 per cent of the vote in a new poll published on Wednesday, their worst showing since before the pandemic.

The question of who will lead the centre-right into the September election still needs to be settled in the coming weeks.

Merkel’s Christian Democrats (CDU) elected a new leader, Armin Laschet, at a party congress in January – making him the most obvious choice.

But that result was not the final word on who will run for chancellor, with Markus Soeder from the CDU’s Bavarian sister party also seen as a possible candidate.

Anda, the former government spokesman, said power would likely shift towards Laschet and Soeder as the ‘lame duck’ Merkel nears the end of her term.

Germany’s Green party came second in Wednesday’s poll with 22 per cent of the vote, a result which could potentially tee up a coalition with the CDU.

Merkel’s current coalition partners, the Social Democrats (SPD), were third on 18 per cent, meaning the current alliance would be unlikely to have a majority.

There has also been talk of a possible three-way coalition between the SPD, Greens and the pro-business Free Democrats (FDP).

The latest poll would put those three on a combined 48 per cent of the vote, potentially enough for a small majority in the Bundestag.

Such a coalition would dump the CDU out of power for the first time since Merkel succeeded Schroeder in 2005.