BBC is 'one journalistic lapse' from falling apart after Diana scandal

Home Secretary Priti Patel said the BBC’s reputation has been ‘compromised’ by the disclosures over its 1995 Panorama interview with Diana, Princess of Wales, as the corporation’s ex-chairman warned the organisation was ‘one journalistic lapse’ away from irreversibly damaging public trust.

Speaking on Sky News’s Trevor Phillips on Sunday programme, the Home Secretary said: ‘The BBC itself – one of our great institutions – its reputation has been compromised. 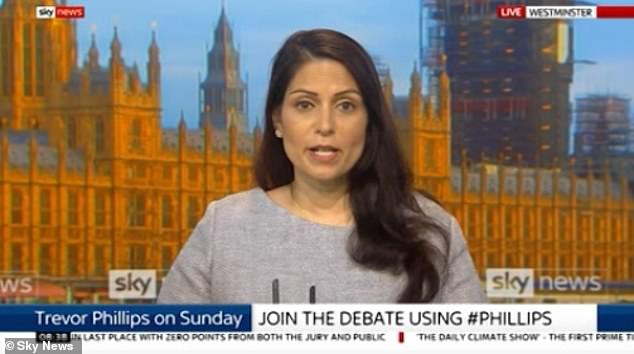 Home Secretary  Priti Patel said the BBC’s reputation has been ‘compromised’ by the disclosures over Martin Bashir’s 1995 Panorama interview with Diana, Princess of Wales

‘They themselves will have to reflect upon the report and spend a great deal of time really looking at how they can regain and rebuild trust and confidence.

‘They will have a great deal of work to do in this particular area. Right now is a very, very important time for the BBC to very much look at itself and learn very important lessons from the publication of this report.’

Home Secretary Priti Patel said the forthcoming mid-term review of the BBC charter would be a ‘very, very significant moment’ for the corporation. 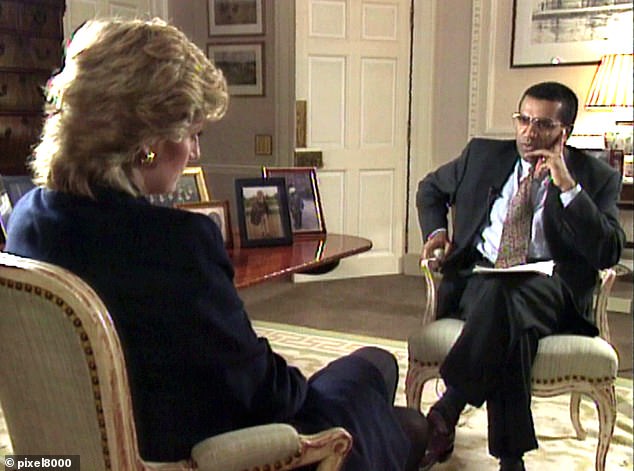 Priti Patel’s come after Lord Dyson’s report found the BBC covered up the ‘deceitful behaviour’ of journalist Martin Bashir in securing his 1995 interview with Diana, the Princess of Wales

‘There will be an opportunity not only for reflection but an opportunity to look at governance reforms and how effectively accountability and governance can be strengthened,’ she told Sky News’s Trevor Phillips on Sunday.

‘There will be a very, very significant moment now – there is no question about this – where lessons have to be learned.’ 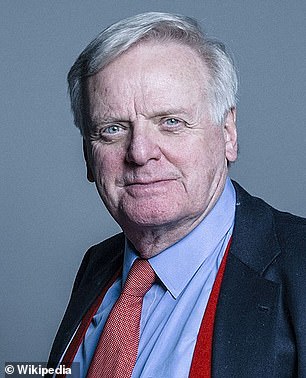 Lord Michael Grade of Yarmouth, a seasoned television executive and Government advisor on public service broadcasting, said ‘the time for hand-wringing is well past’ and proposed that the BBC adopts an independent Ofcom-style ‘content board’ to handle complaints.

Writing in The Sunday Telegraph, Lord Grade said: ‘I hope that the BBC board and the Government will look at this proposed reform in the lead up to next year’s midterm governmental review of the BBC.

‘The time for a reformed culture led by governance reform is now, before another journalistic ‘lapse’ brings the whole house down.

‘Journalism from the BBC is too important to our democratic blood stream to risk another serious error.’

He told Sky’s Trevor Phillips on Sunday: ‘Fundamentally the BBC now needs to show that what happened with the Martin Bashir interview couldn’t happen again, that obtaining of an interview by deception.

‘Very understandingly that’s raised very wide questions about ethics and about how that can be prevented from happening again. 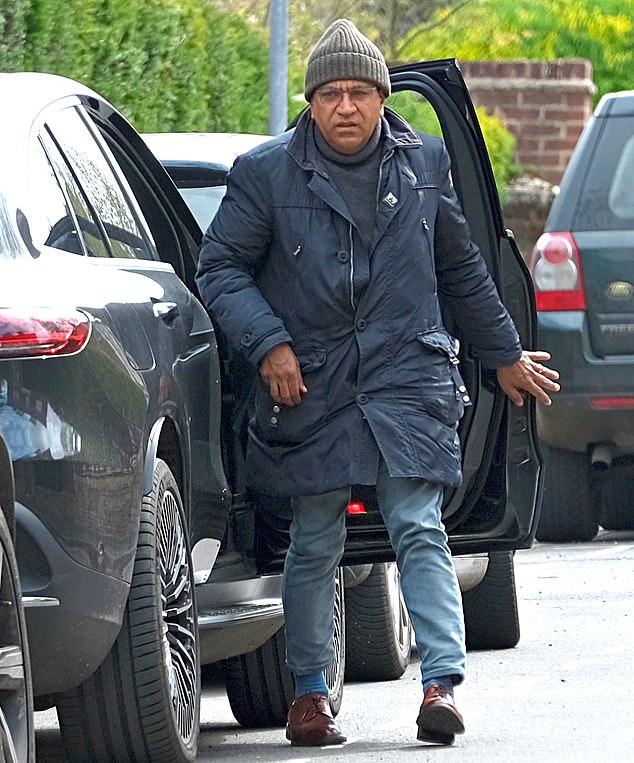 ‘There’s a specific question too, as to how the BBC came to once again employ Mr Bashir in 2016 and how that happened.

‘But, look, the BBC makes some great programmes, the BBC still has a great reputation around the world, but it now has to rebuild trust and prove to people that what happened then couldn’t happen again.’

Amid the continuing fallout from the Dyson report, Lord Hall, the former BBC director-general who conducted a botched investigation into Bashir’s conduct, yesterday announced he had resigned as chairman of the National Gallery.

Lord Dyson’s excoriating 127-page inquiry report was damning of the BBC but many questions remain. Here Chief Reporter SAM GREENHILL examines some of the most pressing:

It was revealed that a BBC executive told the corporation’s own flagship news programmes to look the other way about Bashir. The boss was not unmasked by Lord Dyson, but he revealed how the editors of Radio 4’s Today, The World at One and PM programmes were told by ‘a senior BBC news and current affairs executive’ that ‘if anyone asks about Bashir, the official line is, ‘It’s not interesting’.’ Lord Hall, who was head of news and current affairs at the time, said he ‘didn’t know’ who the culprit was. Lord Birt, who was then director-general, also pleaded ignorance.

2: Was there a ‘hostile’ culture to whistleblowers?

The whistleblowers certainly think so as they were hounded out the corporation as ‘troublemakers’. Worse, the BBC then launched a cynical ‘briefing’ campaign. Alison Kelly, a press officer, told the inquiry she recalled being asked to inform the Panorama team ‘that the BBC was briefing the press that it suspected that stories about fake bank statements were being leaked by jealous colleagues’.

3: How did Bashir get bank details for forgeries?

There is a lingering mystery over the fake bank statements Bashir used to gain access to Diana – because somehow he had obtained specific personal account details to put on to them. Lord Dyson ruled out Diana or her brother providing them, suggesting Bashir must have used some other method to get hold of the information.

We still don’t know who burgled the flat of BBC graphics designer Matt Wiessler and stole nothing but two computer disks containing the fake bank statements. The vital evidence vanished in the mysterious raid on the night of the Panorama Christmas party in December 1995. Panorama producer Mark Killick’s home was also burgled.

5: Was Bashir source of ‘sorry about baby’ remark?

Few were so wounded by Bashir’s smears than royal nanny Tiggy Legge-Bourke. He allegedly baited Diana by encouraging her to believe false claims of an affair with Prince Charles and ‘an abortion’. At a party on December 14, 1995, Diana devastated innocent Miss Legge-Bourke with the acid remark: ‘So sorry to hear about the baby’. Lord Dyson said the episode was irrelevant to his inquiries.

In 2016 the BBC under director-general Lord Hall brought Martin Bashir back into the fold, as religious affairs correspondent – even though Hall knew Bashir had lied during the Diana scandal 20 years earlier. Bashir was subsequently promoted to the prestigious post of BBC religion editor. The chairman of the Commons’ media committee, Julian Knight, said: ‘Why was Martin Bashir rehired, with the BBC knowing what they knew?’

7: Would BBC cooperate with a criminal inquiry?

When the News of the World newspaper was accused of underhand behaviour, it did not take long before Scotland Yard was conducting dawn raids. Today there are several calls for police to probe whether former BBC chiefs should be investigated.

8: Did Bashir use similar deceit in Terry Venables documentary?

Lord Dyson said the terms of his inquiry meant he would not examine claims that Bashir used ‘similar techniques of document fabrication’ on a documentary about former England football manager Terry Venables. Venables went on to sue the BBC unsuccessfully.

9: Why was Panorama special delayed?

The BBC bravely commissioned a Panorama special to investigate itself – then pulled the programme hours before transmission on Monday. It was finally shown on Thursday night. The BBC said it was a ‘duty of care issue’ with Bashir on sick leave following heart surgery but others questioned what difference three days made.

10: Why did Lord Hall not ask Earl Spencer for evidence?

Lord Hall cleared Bashir as ‘honest and honourable’ in his 1996 inquiry without even checking if Earl Spencer had any evidence – which the judge called ‘a most serious flaw in the investigation’.

…and the potential offences

As detectives pore over the Lord Dyson report to check for any evidence of criminality, they could consider these potential offences:

FRAUD: Under the Theft Act 1968, which was in force in 1995, it was an offence to obtain money or ‘pecuniary advantage’ by deception. It is still an offence under the Fraud Act 2006.

Fraud is defined as a false representation by means of a statement or conduct made knowingly or recklessly to gain a material advantage.

FORGERY: Under the Forgery Act 1981, it is an offence to procure falsified financial documents with the intention to deceive.

Blackmail: Under the Theft Act 1968, a person is guilty of blackmail if – with a view to a gain to himself or with the intent to cause loss to another – he makes an ‘unwarranted demand with menaces’.

Earl Spencer has suggested Diana may have been a victim of blackmail.

Ministers had viewed the peer’s job at the National Gallery as untenable given the museum’s close connection to Prince Charles, its royal patron.

Lord Hall was among corporation bosses who were attacked by Prince William for ‘looking the other way rather than asking tough questions’ in the aftermath of the 1995 Princess Diana interview.

Meanwhile, former BBC executive Tim Suter, who was part of the 1996 internal investigation, stepped down from his board role with media watchdog Ofcom on Friday.

Following publication of the report, Prime Minister Boris Johnson intensified pressure on the corporation to implement changes, saying: ‘I’m obviously concerned by the findings of Lord Dyson’s report – I’m very grateful to him for what he has done.

‘I can only imagine the feelings of the Royal Family and I hope very much that the BBC will be taking every possible step to make sure nothing like this ever happens again.’

The corporation last night pointed out that it had already gone through ‘two substantial changes’ in governance since the mid-1990s.

But it could yet be pushed into a major overhaul in the way its editorial decisions are overseen.