Biden also told Putin the US would “act firmly in defence of its national interests” regarding Russian cyber intrusions and election interference, according to the White House. Biden proposed a summit in a third country “in the coming months” to discuss the full range of US-Russia issues, the White House said. 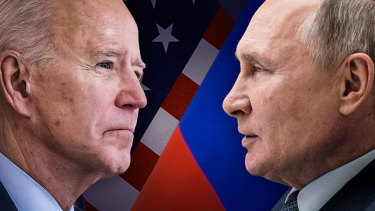 Joe Biden has said Vladimir Putin will pay for meddling in the US election.Credit:Facebook

The Biden-Putin relationship has been rocky in the early going of the new US administration. Biden is weighing action against Russia for the SolarWinds hacking campaign, Russian interference in the 2020 presidential election, reports of Russian bounties on US soldiers in Afghanistan and the poisoning and jailing of Russian opposition leader Alexei Navalny.

There is growing concern in the West about a surge of cease-fire violations in eastern Ukraine, where Russia-baсked separatists and Ukrainian forces have been locked in a conflict since Moscow’s 2014 annexation of Ukraine’s Crimean Peninsula.

Biden’s call with Putin came as the top US diplomat and the leader of NATO condemned the recent massing of thousands of Russian troops.

“President Biden emphasised the United States’ unwavering commitment to Ukraine’s sovereignty and territorial integrity,” the White House said in a statement. The White House added that Biden made clear that Russia must “de-escalate tensions.”

More than 14,000 people have died in fighting in eastern Ukraine, and efforts to negotiate a political settlement have stalled. Over the past week, there have been daily reports of Ukrainian military casualties and rebels also have reported losses. 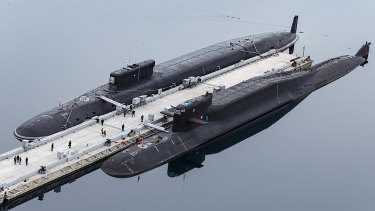 Ukraine has said Russia has 41,000 troops at its border with eastern Ukraine and 42,000 more in Crimea. Russian Defence Minister Sergei Shoigu said on Tuesday the military buildup of the past three weeks was part of readiness drills in response to what he described as threats from NATO. He added the manoeuvers in western Russia would last for two more weeks.

“The troops have shown their full readiness to fulfil tasks to ensure the country’s security,” Shoigu said.

The Kremlin in a statement said “during an exchange of opinions on Ukraine’s internal political crisis,” Putin told Biden about “approaches to a political settlement” based on the 2015 peace deal brokered by France and Germany and signed in Minsk, Belarus. 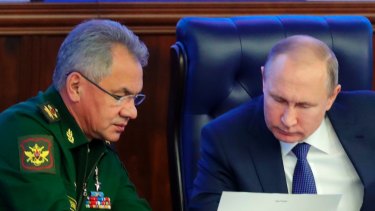 The White House provided no details on timing or location of Biden’s proposed summit. Putin has repeatedly brushed off calls by US officials to cease provocations on Ukraine’s border and on other issues. Still, the White House said that holding talks can be useful.

“When it comes to diplomacy you don’t stop calling for what are the right actions and the appropriate actions and the actions the global community believes are right just because you see a hesitation,” White House press secretary Jen Psaki said.

Earlier Tuesday, Secretary of State Antony Blinken, who was in Brussels for meetings with NATO allies and Ukraine’s foreign minister, accused Russia of taking “very provocative” actions with the massing of troops. 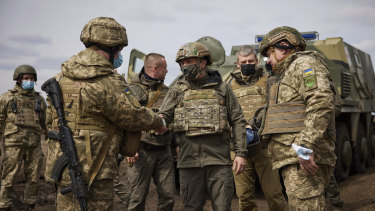 NATO chief Jens Stoltenberg also called the Russian movements “unjustified, unexplained and deeply concerning.” He said the Russian deployment was the largest concentration of troops near the Ukrainian border since 2014.

Ukrainian Foreign Minister Dmytro Kuleba urged Western countries to make clear to Moscow that it would pay a price for its “aggression”.

“The US stands firmly behind the sovereignty and the territorial integrity of Ukraine,” Blinken told Kuleba at the start of their meeting at the residence of the US ambassador to Belgium, a post once held by Blinken’s uncle. “That’s particularly important at a time when we’re seeing, unfortunately, Russia take very provocative actions when it comes to Ukraine.”

Kuleba replied that Ukraine was grateful for the support of the US and NATO, an alliance that Kiev is looking to join over fierce Russian objections.

Although Biden agreed to extend a major arms control deal with Russia, he has been notably cool toward Moscow and highly critical of many of its activities.

Last month in an interview with ABC News, Biden agreed with the description of Putin as a “killer” and he has criticised the jailing of Navalny, the opposition figure. US intelligence released a report last month finding that Putin authorised influence operations to help former President Donald Trump’s reelection bid.

Putin in response to Biden’s killer comment recalled his ambassador to the US and pointed at the US history of slavery and slaughtering Native Americans and the atomic bombing of Japan in World War II.

The back and forth underscored Biden’s desire to distance himself from the perception that Trump was soft on Putin despite actions his administration took against Russia.

In his first call with Putin as president in late January, Biden raised concerns about the arrest of Navalny, Russia’s alleged involvement in the vast SolarWinds cyberespionage campaign and reports of Russian bounties on American troops in Afghanistan. The Kremlin, meanwhile, focused on Putin’s response to Biden’s proposal to extend the last remaining US-Russia arms control treaty.

After that call, Biden said in a speech before State Department officials that the days of the US “rolling over” to Putin were over.

“We will not hesitate to raise the cost on Russia and defend our vital interests and our people,” Biden said.