BLM activists call for officers to be replaced with social workers

Who replaces the police? BLM activists call for officers to be replaced with social workers, mental health advocates and homeless charities

Their chants called for widespread disbanding of U.S. police forces after Minneapolis councilors voted to abolish the city’s police force in an historic move after days of protests over the killing of George Floyd during an arrest.

However supporters of ‘defund the police’ say their demands are not necessarily about eliminating police departments or stripping agencies of all of their money.

They say it is time for the country to address systemic problems in policing in America and spend more on what communities across the U.S. need, like housing and education.

Among plans from activists to replace police are; 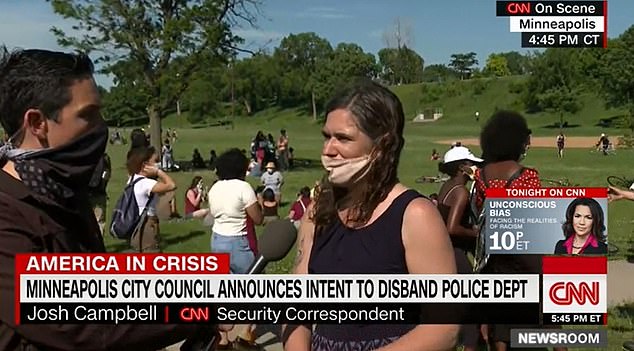 Lisa Bender, president of the Minneapolis City council said councillors were committed to dismantling policing ‘as we know it’, and replacing it with ‘Housing, health care, education’

State and local governments spent $115 billion on policing in 2017, according to data compiled by the Urban Institute.

Bender said the city, with a billion dollar annual budget, had analysed 911 calls to determine what help people in Minneapolis were calling for, they found most people needed mental health services, health services, EMTs or fire services – not an armed police officer.

She added: ‘Housing, health care, education, all of it together that helps keep our communities safe, and to really work with our community over the next year so imagine what that looks like to build that system, including everyone. 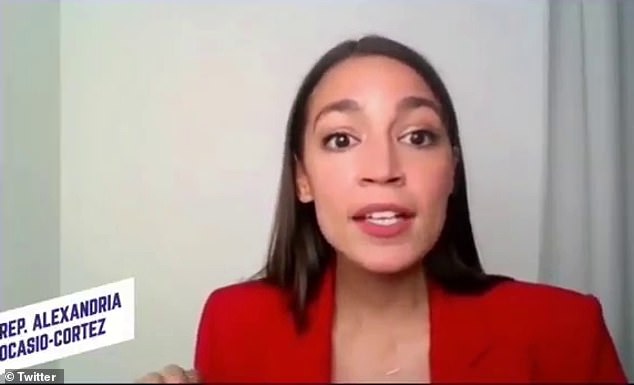 US Representative Alexandria Ocasio-Cortez said that oversized military budgets had allowed for untrained police to have access to tanks, and funding must be redistributed into education 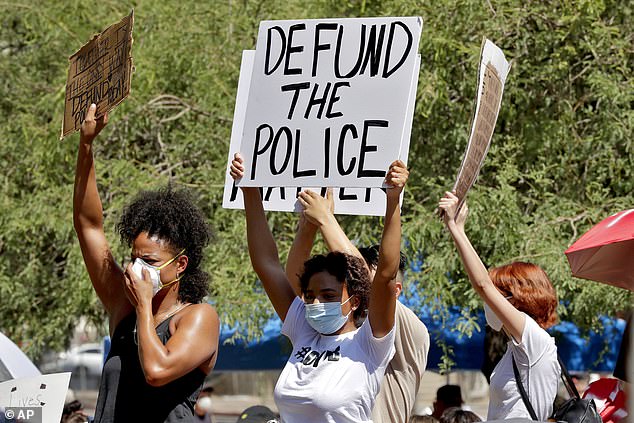 US Representative Alexandria Ocasio-Cortez called for military budgets to be slashed alongside policing budgets to direct funds into education and health care ‘preventing conflict to begin with’.

Speaking to The Hill Ocasio-Cortez said: ‘The militarization of our police is enabled by the federal government. And I want everyone to draw a direct line between our police budget, and our defense budget here in the United States of America. Because we would not be giving local police departments who are under-trained a tank, if we didn’t give the military too much money to have extra damn tanks lying around to begin with.

Ocasio-Cortez added: ‘The same problems that we are seeing on a city council level, and on a city level, which are you have an entire city budget and half of that budget goes to policing and a shred to education, a shred to mental health services of crumb for hospitals, that is mirrored on the federal level. It is in the image of its creator.’

Activists acknowledge this is a gradual process.

The group MPD150, which says it is ‘working towards a police-free Minneapolis,’ argues that such action would be more about ‘strategically reallocating resources, funding, and responsibility away from police and toward community-based models of safety, support, and prevention.’

The group states on its website: ‘The people who respond to crises in our community should be the people who are best-equipped to deal with those crises. Rather than strangers armed with guns, who very likely do not live in the neighborhoods they’re patrolling, we want to create space for more mental health service providers, social workers, victim/survivor advocates, religious leaders, neighbors and friends – all of the people who really make up the fabric of a community – to look out for one another’.

Adding that those who commit crime often only do so when their basic needs are not filled by other means.

Minneapolis Police Chief Tony Bouza told the group: ‘The idea of police as crime preventers is rubbish. By the time the cop appears the criminal has been formed and the crime has been committed .’

Speaking at a BLM protest today Congresswoman Ilhan Omar said: ‘I will never stop saying, not only do we need to dis-invest in police, but we need to completely dismantle the Minneapolis police department, it is rotten to the root. And so when we dismantle we allow for something beautiful to arise. And that re-imagining allows us to figure out what public safety looks like for us.’

Black Lives Matter co-founder Alicia Garza asked during an interview on NBC’s Meet the Press: ‘Why can’t we look at how it is that we reorganize our priorities, so people don’t have to be in the streets during a national pandemic?’

The call for defending has been met by support from some lawmakers.

Senator Cory Booker said he understands the sentiment behind the slogan, but it’s not a slogan he will use.

The New Jersey Democrat told NBC’s ‘Meet the Press’ that he shares a feeling with many protesters that Americans are ‘over-policed’ and that ‘we are investing in police, which is not solving problems, but making them worse when we should be, in a more compassionate country, in a more loving country.’

Representative Karen Bass, a Democrat from California and chairwoman of the Congressional Black Caucus, said part of the movement is really about how money is spent.

‘Now, I don’t believe that you should disband police departments,’ she said in an interview with CNN. ‘But I do think that, in cities, in states, we need to look at how we are spending the resources and invest more in our communities.

‘Maybe this is an opportunity to re-envision public safety,’ she said.

However the protesters rallying cry has also become a stick for President Donald Trump to use on Democrats as he portrays them as soft on crime.

President Donald Trump and his campaign view the emergence of the ‘Defund the Police’ slogan as a spark of opportunity during what has been a trying political moment. Trump’s response to the protests has sparked widespread condemnation. But now his supporters say the new mantra may make voters, who may be otherwise sympathetic to the protesters, recoil from a ‘radical’ idea.

Trump seized on the slogan last week as he spoke at an event in Maine.

‘They’re saying defund the police,’ he said. ‘Defund. Think of it. When I saw it, I said, `What are you talking about?’ `We don’t want to have any police,’ they say. You don’t want police?’

Trump’s 2016 campaign was built on a promise of ensuring law and order – often in contrast to protests against his rhetoric that followed him across the country. As he seeks reelection, Trump is preparing to deploy the same argument again – and seems to believe the ‘defund the police’ call has made the campaign applause line all the more real for his supporters.

However it does appear that the movement has already caused some major city Mayors to declare they plan to redistribute budgets away from police departments.

In New York City, Mayor Bill de Blasio said Sunday that the city would move funding from the NYPD to youth initiatives and social services, while keeping the city safe, but he didn’t give details.

In Los Angeles, Mayor Eric Garcetti vowed to cut as much as $150 million that was part of a planned increase in the police department’s budget.

A Minneapolis city councilmember said in a tweet on Thursday that the city would ‘dramatically rethink how we approach public safety and emergency response.’

‘We are going to dismantle the Minneapolis Police Department,’ Jeremiah Ellison wrote. ‘And when we’re done, we’re not simply gonna glue it back together.’ He did not explain what would replace the police department.

A majority of the members of the Minneapolis City Council said Sunday they support disbanding the city’s police department. Nine of the council’s 12 members appeared with activists at a rally in a city park Sunday afternoon and vowed to end policing as the city currently knows it.

Disbanding an entire department has happened before. In 2012, with crime rampant in Camden, New Jersey, the city disbanded its police department and replaced it with a new force that covered Camden County. Compton, California, took the same step in 2000, shifting its policing to Los Angeles County.

Generally, police and union officials have long resisted cuts to police budgets, arguing that it would make cities less safe.

The Los Angeles Police Protective League, the union for the city’s rank-and-file officers, said budget cuts would be the ‘quickest way to make our neighborhoods more dangerous.’

‘Cutting the LAPD budget means longer responses to 911 emergency calls, officers calling for back-up won’t get it, and rape, murder and assault investigations won’t occur or will take forever to initiate, let alone complete,’ the union’s board said in a statement last week.

‘At this time, with violent crime increasing, a global pandemic and nearly a week’s worth of violence, arson, and looting, `defunding’ the LAPD is the most irresponsible thing anyone can propose.’