MPs urge Boris Johnson to look at ‘data not dates’ and SPEED UP the end of Covid lockdown, as Britain records just ONE Covid death in lowest daily toll in nine months, with vaccines hitting 50 MILLION

Calls for a quicker end to lockdown grew yesterday as the daily Covid death toll fell to just one.

The figure was the lowest since last August with infections also plummeting to an eight-month low.

Despite the falling numbers – and the huge success of the vaccine rollout – Britain is still not scheduled to open up fully for another seven weeks. Ministers are even hinting that masks and forms of social distancing may continue past June 21.

And the list of quarantine-free destinations is likely to be very limited when the blanket ban on foreign travel ends later this month.

Robert Syms, Tory MP for Poole, urged Boris Johnson to stick to his promise of following ‘data not dates’. 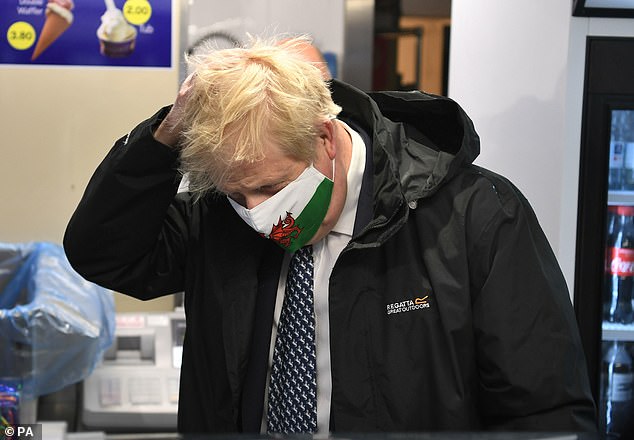 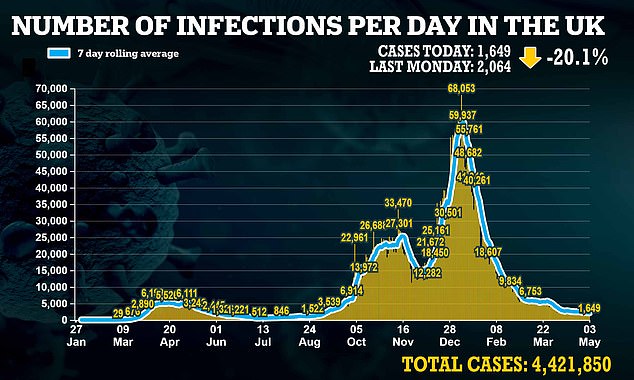 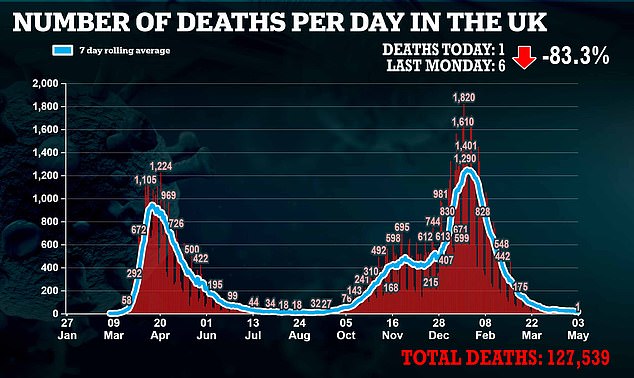 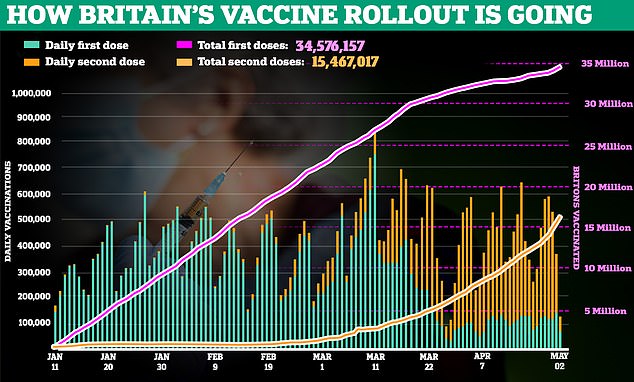 ‘If you take the data rather than dates, infections, hospitalisations and deaths have fallen quite rapidly and there doesn’t seem to be any evidence that any of the unlocking has caused any sort of spike,’ he said.

‘It didn’t happen when schools reopened and hasn’t as a result of shops reopening. We need to push the Government to get on with it. A lot of normal life could be returned.’

As Britain passed the milestone of 50million vaccinations, Sir Robert called for measures such as allowing more guests at weddings ‘otherwise we’re going to lose another summer’.

A further 1,649 confirmed cases of coronavirus were reported yesterday – down 20 per cent in seven days. The solitary death takes the seven-day total to 105 – down 35 per cent on the week before.

The figures came as:

Mr Johnson struck a positive note yesterday, saying that the lockdown easing roadmap was on course, with almost all social distancing rules likely to be scrapped from June 21. He said: ‘We have got a good chance of being able to dispense with the one-metre plus from June 21.

‘That is still dependent on the data, we can’t say it categorically yet, we have got to look at the epidemiology as we progress. But that’s what it feels like to me right now.’ Tory former minister David Jones said the Government should now consider bringing forward the June 21 target.

He added: ‘Lots of hospitality businesses desperately need to recommence full trading and lots of livelihoods depend on it.’ 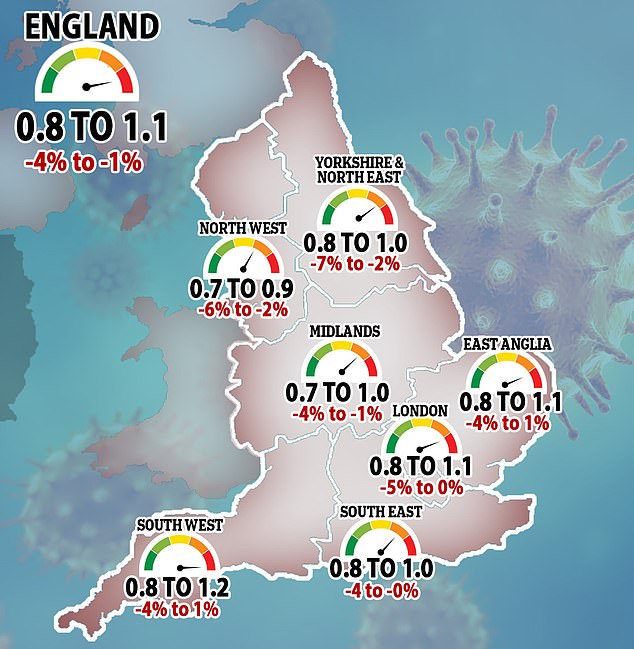 ‘We’ve had a lot of reservations cancelled because of the terrible freezing weather.’

Kate Nicholls of trade body UKHospitality said: ‘A return to unrestricted trading on June 21 is critical and will mean hospitality businesses can come off life support and be viable for the first time in almost 16 months.

‘We urge the Government to confirm reopening dates and these plans at the earliest opportunity, which will boost confidence and allow companies to step up planning and bring staff back.’

A spokesman for the UK Cinema Association indicated it hoped face coverings would not be a continued requirement.

He said: ‘We strongly believe that our exemplary record on safety – with not a single case of Covid traced back to a UK venue – and our ability to manage the movement of cinema-goers in modern, highly ventilated indoor environments offer ample evidence that any relaxation from June 21 can be undertaken safely without the need for further ongoing restrictions, including any requirement for face coverings.’

A review of social distancing is expected to announce its findings before June 21. But the Mail understands that masks may still be required in some settings along with one-way systems and screens in some venues.

A separate review into close contact between friends and families – allowing relatives to hug one another again – will report within a fortnight.

Germany is to lift restrictions on citizens who have been vaccinated as early as this week. In Denmark, those who can show on a ‘coronapas’ that they have been inoculated can visit restaurants, bars, cafes, museums, art galleries, libraries, zoos and theme parks. French authorities are working on a so-called ‘passe sanitaire’.