Boy, 10, crushed to death after falling from horse in freak rodeo accident

A TEN-YEAR-OLD boy was crushed to death after his horse suffered a medical episode, it has been reported.

Legend Williamson, 10, had been competing in the Texas Junior High Rodeo, at the Beauregard Parish Covered Arena, when the tragedy unfolded. 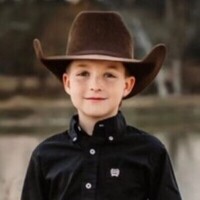 According to KLPC, the horse took the turn for the worst in the warm-up pen, when it suddenly reared up and fell on the child.

Williamson was then swiftly transported to a nearby hospital, where tragically he was pronounced dead.

After the horse was examined by a veterinarian, they believed it had collapsed to the ground having suffered a suspected brain aneurysm or heart attack.

However, a direct cause is yet to be determined.

In a statement, Beauregard Parish Sheriff’s Office Chief Detective Sylvester Denmond called it  a “freak accident,” adding “our thoughts and prayers go out to the family and the rodeo community.”

The incident comes just two years after an inquest found that a British teen equestrian star had been accidently crushed to death by her horse.

Iona Sclater, 15, who was considered a rising star, died in 2019 after her horse Jack had "somersaulted" and landed on top of Iona after he fell at a 1.32m-high hay bale.

Horrified family members rushed over to help the teen but she was sadly pronounced dead at the scene after going into cardiac arrest.

A post-mortem gave a cause of death as a crush injury to the chest.

"Iona suffered a fatal crush injury caused when the horse she was riding landed on top of her following a fall.

"The fall would have been unintentional and in those circumstances I find that, very tragically indeed, Iona died as a result of an accident."