Boy, nine, has a dart stuck in his colon after ‘inserting it into his rear while playing at home alone’

A boy in China has had a dart removed from his body after he inserted it into his rear ‘by accident’, according to doctors.

The nine-year-old was said to be playing at home unattended when he allegedly stuck the arrow – estimated to be six inches long – into his backside.

Doctors found the sharp object inside the young patient during a medical checkup after he was rushed to the hospital by his parents in China’s eastern province Jiangsu. 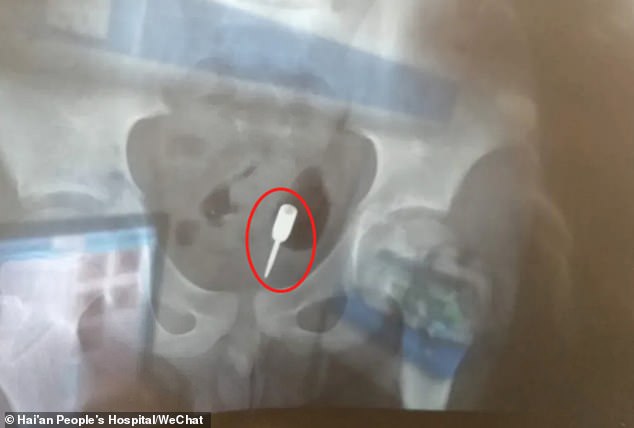 The medics injected a large amount of saline into the boy’s colon to help him release the excrement. They then found the sharp object wrapped in the faeces. An X-ray scan released by the Hai’an hospital in eastern China shows the small arrow stuck in the Chinese boy’s colon

The incident was brought to light when the boy’s family took him to seek medical attention at the People’s Hospital in the city of Hai’an on June 30.

He was rushed to the hospital after his parents discovered the incident when they returned home, but doctors did not reveal how his parents found out about the matter.

Doctors said that they had spotted a large chunk of faeces in the young patient’s colon during a colonoscopy.

A colonoscopy is used by medical workers to examine a patient’s colon and rectum by inserting a flexible tube with a camera attached into the anus.

Dr Zheng, a chief medic at the hospital, told Nantong Television: ‘We checked the colon further and found nothing else there. So, we suspected that the dart was in the faeces.’

The medics injected a large amount of saline into the boy’s colon to help him release the excrement. They then found the sharp object wrapped in the faeces.

Dr Zheng said that the youngster’s life could have been in danger if the pointy dart had pierced through his colon.

Media reports did not specify the length of the dart, but it measures five to seven inches on average.