BP records massive £4.2BILLION annual loss after demand for oil plummeted during the coronavirus pandemic – just a year after raking in profits of £7.3billion

BP has suffered a mammoth annual loss of £4.2billion after oil prices and demand plummeted amid the pandemic.

The oil giant’s hefty underlying replacement cost losses compare with profits of £7.3billion in 2019 and come despite a bounce-back in the second half of the year.

BP’s results for the final quarter of 2020 show it made underlying profits of £84million, having swung out of the red in the previous quarter, but the figures were worse than expected.

It said oil prices have risen since the end of October, helped by the rollout of the coronavirus vaccine worldwide, while it also expects demand to bounce back this year.

Prices then rebounded sharply and are currently trading above £37 per barrel. 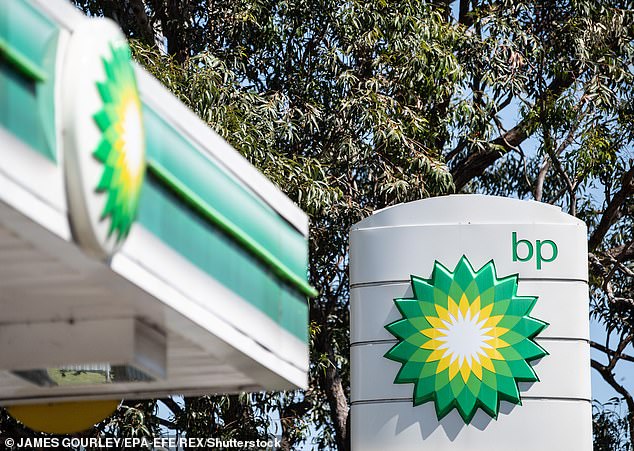 The oil giant’s hefty underlying replacement cost losses compare with profits of £7.3billion in 2019 and come despite a bounce-back in the second half of the year

It comes as BP dismantled its century old exploration team, cutting the division to less than 100 employees from over 700 just a few years ago.

The move shows how fast the energy supermajors are withdrawing from oil in their battle to become carbon net zero by 2050.

Chief executive Bernard Looney said: ‘2020 will forever be remembered for the pain and sadness caused by Covid-19. Lives were lost, livelihoods destroyed.

‘Our sector was hit hard as well. Road and air travel are down, as are oil demand, prices and margins.’

‘We launched a net zero ambition, set a new strategy to become an integrated energy company and created an offshore wind business in the United States,’ Looney said.

‘We began reinventing BP – with nearly 10,000 people leaving the company. We strengthened our finances – taking out costs and closing major divestments.’

He said 2020 was also a ‘pivotal year’ for the company as it launched a net-zero goal and overhauled itself in a move that saw nearly 10,000 jobs go.

Mr Looney added: ‘We expect much better days ahead for all of us in 2021.’

Despite a more optimistic outlook for 2021, BP said coronavirus restrictions globally will continue to knock demand throughout the first quarter, with oil refining margins to remain under pressure.

The group’s reported results showed the impact of massive write-offs made in the summer after Brent crude oil prices plummeted as the crisis took hold and as Russia and Saudi Arabia kicked off a production war.

Brent crude had started the year on around £44 per barrel, but dropped to £40 before January was out, even briefly dipping below £13 in April. This saw BP write off around £12.8 billion in June. 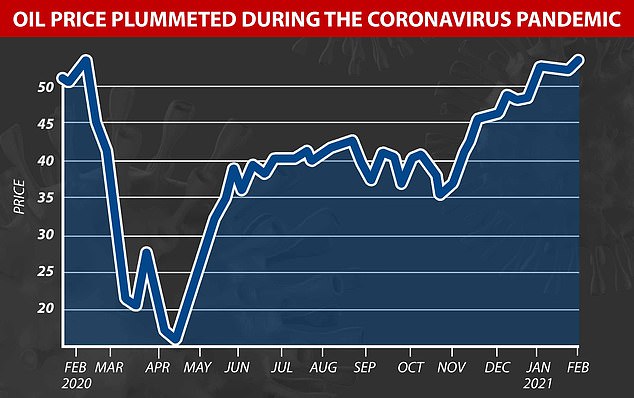 Rival Royal Dutch Shell also wrote down many billions of pounds and will reveal the toll on its results on Thursday.

For BP it has now been a year since boss Mr Looney took over the top job, promising to steer the ship on a new course.

The company, which is more than 100 years old, plans to reduce its emissions to a level low enough where they can all be offset by 2050.

However, this requires major change throughout the business.

Hundreds of employees have already left the company’s oil and gas hunting arm as the company reportedly scaled back how much time it spent looking for new resources.

After an initial pledge in February as he stepped into the role, Mr Looney laid out more detail in August, winning cautious optimism from sometime critics.

He said that oil and gas production would be cut by 40 per cent and investment in low-carbon projects increase tenfold to £3.8 billion every year by 2030.

Tuesday’s results were published one day after the company announced the sale of a 20 per cent stake in Oman’s block 61 gas field to Thailand’s state-controlled PTTEP for £1.9billion. BP will retain a 40 per cent stake and continue to operate the block.

Under Looney, who took over the reins at BP a year ago as the pandemic began taking hold, the group is looking to raise £18.25billion from asset sales by 2025.

After companies worldwide closed their doors and airlines grounded planes towards the end of last year’s first quarter, oil prices dropped off a cliff, even turning negative at one point.

Prices then rebounded sharply and are currently trading above £37 per barrel.

Since being formed in 1909, BP has been renowned for its oil exploration skills – showing, and teaching, the world how to find the black gold.

From the outset, the company had a reputation as a dashing risk taker unafraid to take on difficult projects across the Middle East and South America.

By the 1960s BP was making massive profits as investors shrugged aside one of the worst safety records in the industry. But under Bernard Looney, who became chief executive last year, the tradition has ended.

‘The winds have turned very chilly in the exploration team since Looney’s arrival,’ a senior member of the team said.

BP is selling a third of its stake in an Omani gas development to a subsidiary of Thailand’s largest corporation that it said ‘marks another significant step’ in its divestment strategy.

The group stated that it has agreed a $2.6billion (£1.9billion) offer for 20 per cent of the Block 61 site from PTT Exploration and Production and is hoping to complete the transaction later this year.

It still remains the largest stakeholder in the project though, holding a 40 per cent share, with another 30 per cent controlled by Oman’s state-run energy firm OQ and the final 10 per cent owned by Malaysia’s Petronas.

The deal forms part of its plan to divest $25billion worth of assets by 2025, and comes exactly a month after it finalised the sale of its petrochemicals business to Ineos for $5billion (£3.6billion).

Block 61 is the largest tight gas field in the Middle East, can provide 35 per cent of Oman’s gas demand, and has a combined production capacity of 1.5 billion cubic feet of gas every day, according to BP.

Its interest in the development dates back to 2007 when the FTSE 100 firm signed a production sharing ‎agreement for the site. It eventually began production on the site’s ‎Khazzan gas field in 2017 and then the Ghazeer field four months ago.

Chief executive Bernard Looney said: ‘We are pleased to welcome PTTEP to the successful Block 61 partnership. Block 61 is a pioneering development that has applied leading techniques and technologies to maximise efficiency and minimise emissions.’

He insisted BP remained ‘committed’ to working in Oman, adding that ‘this agreement allows us to remain at the heart of this world-class development while also making important progress in our global divestment programme.’ 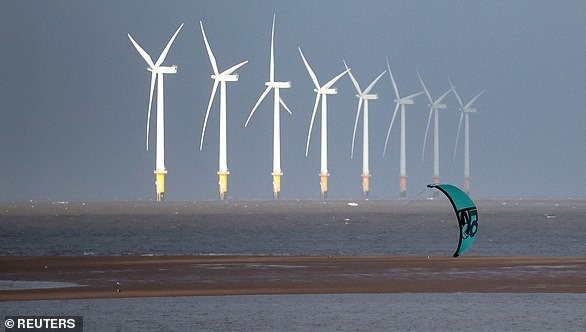 Under his leadership, which reaches its one-year anniversary on Friday, he has vowed to make BP a net zero company by 2050, and annually dedicate $5billion of expenditure towards renewable energy projects by 2030.

This will partly come from the offloading of carbon-heavy assets, such as the recent $5.6billion sale of its 49 per cent stake in the Trans-Alaska Pipeline System, with some of the proceeds from the sales being spent on green energy projects.

These have included a partnership with Equinor to fund two offshore wind projects off the North Atlantic coast, and its purchase of a majority stake in Finite Carbon, the largest forest carbon offset developer in the United States.

The move into green energy has been further motivated by the group’s soaring losses over the last year following the dramatic collapse in oil prices brought about by the coronavirus pandemic and a price war between Russia and Saudi Arabia.

Falling demand for oil products has also badly hurt the business along with the wider petroleum sector, as consumers have travelled less often, and BP has had to write down a considerable proportion of its assets and cut its dividend.

Other cost-cutting measures have included the sale of its St James’s Square headquarters in London to Hong Kong-based Lifestyle International for £250million and a planned 10,000 reduction in staff numbers.

Losses soared to a massive $17.6billion in the second quarter of 2020, though they were only $664million in the next quarter as prices and demand rose again and exploration write-offs went down.