A remote indigenous Amazonian tribe has said that their traditional remedies made from tree bark and honey have helped when treating symptoms of the coronavirus.

The virus has spread rapidly in Amazonas, where more than 20,000 people have been infected with the virus, and 1,400 people have died.

The spread has increased fears for the region’s indigenous people, who have a history of being greatly affected by foreign diseases.

Brazil has an estimated 800,000 indigenous people from 300 ethnic groups. 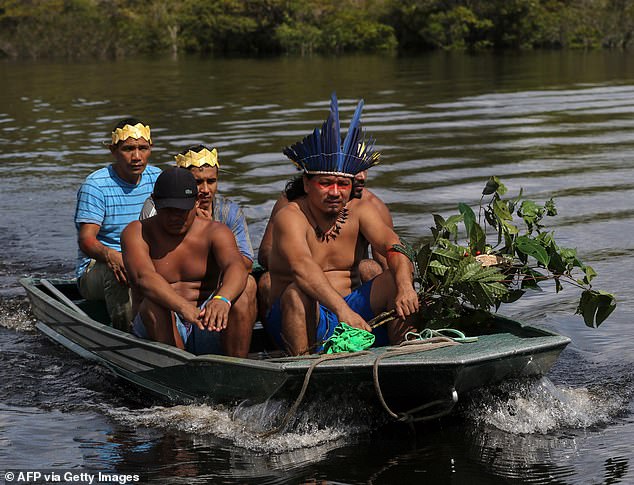 Satere-Mawe indigenous leader Andre Satere (pictured right) and other members of the group return to the community of Wakiru, in Taruma neighbourhood, a rural area west of Manaus, Amazonas State, Brazil, after collecting native plants of the Amazon rainforest, to treat people showing symptoms of the coronavirus, May 17

Far from lab coat and face mask territory, a group of indigenous healers with feather and leaf headdresses has been working its way up the Amazon river, looking for medicinal plants to treat the new coronavirus.

In a small motor boat, five men from the Satere Mawe tribe have been trying to help their people survive without using the saturated state health system in Amazonas, in northwestern Brazil, which despite its remoteness is one of the places hit hardest by the pandemic.

‘We’ve been treating our symptoms with our own traditional remedies, the way our ancestors taught us,’ said Andre Satere Mawe, a tribal leader who comes from a small village on the far outskirts of the state capital, Manaus.

‘We’ve each used the knowledge handed down to us to gather treatments and test them, using each one against a different symptom of the disease.’ 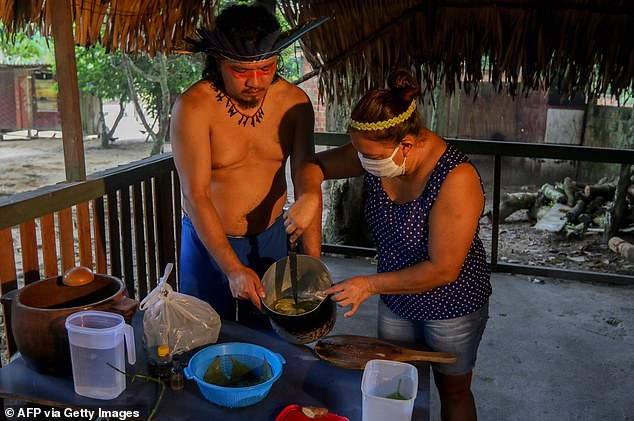 Satere-Mawe indigenous people prepare medicinal herbs to treat people with symptoms of COVID-19 in the Wakiru community, May 17 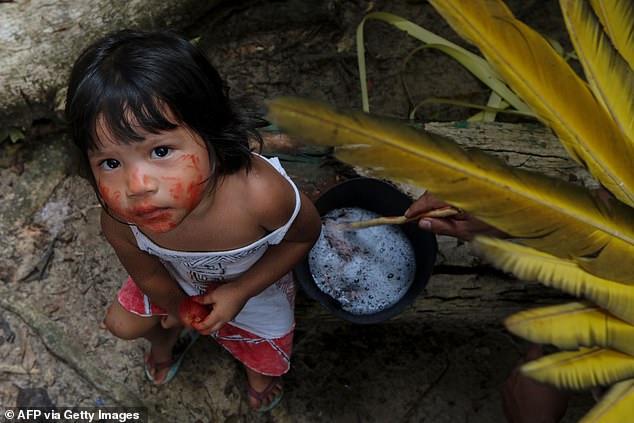 A Satere-Mawe indigenous child sits beside an man preparing medicinal herbs to treat people in the tribe with symptoms of coronavirus, May 17

The virus has overwhelmed hospitals in the Amazonas and forced authorities to dig mass graves for the dead.

It has also raised fears for the region’s indigenous peoples, who have a tragic history of being decimated by diseases brought in from the outside world.

The virus has infected 40 indigenous groups, with 537 positive cases and 102 deaths, according to the Brazilian Indigenous Peoples’ Association.

The Satere Mawes’ remedies include teas made from the bark of the carapanauba tree, which has anti-inflammatory properties; from the saracuramira tree, an anti-malarial; and ingredients such as mango peel, mint and honey. 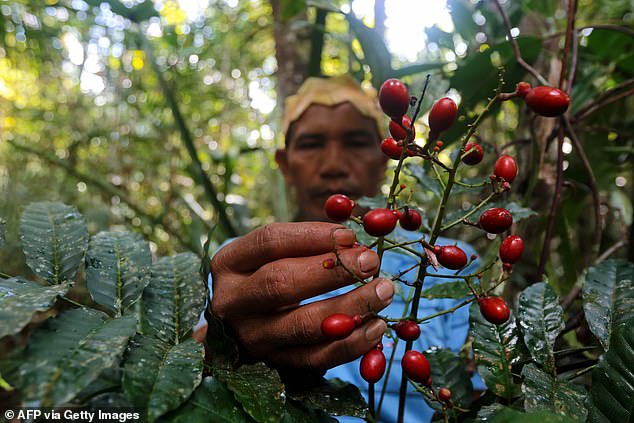 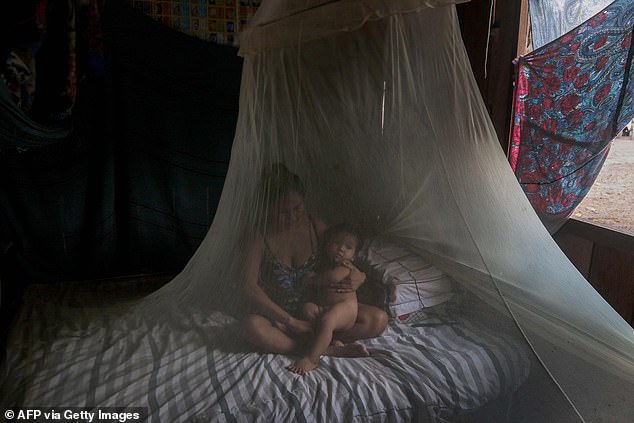 Priscila Tavares Batista, 36 remains in a bed protected by a mosquito net with her son Jone Tavares, 2, after being treated with medicinal herbs after showing symptoms, May 17

Villagers who suspect they have had the new coronavirus say the traditional remedies work.

‘I was feeling weak, it felt like I had something in my lungs, I couldn’t breathe,’ said Valda Ferreira de Souza, a 35-year-old artisan.

‘I took a home-made syrup, which made me feel a lot better.’

Rosivane Pereira da Silva, 40, helps Andre Satere Mawe prepare these remedies. She learned the techniques from her grandfather Marcos, who at 93 years old is still teaching her what he knows. 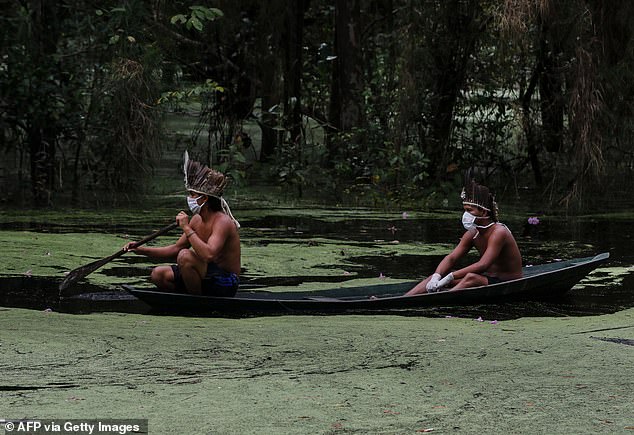 When the pandemic arrived in Amazonas, ‘I went and asked him what to do,’ said Da Silva.

The Satere Mawe, an ethnic group of about 13,000 people, live mainly in the Andira-Marau indigenous reserve.

But Andre Satere Mawe’s group and others have moved closer to Manaus in recent decades.

Not that they are relying on the city’s health services.

‘They’ve been forced to choose who gets care and who doesn’t – and we don’t,’ he said, ‘but we’ve learned to fend for ourselves.’

Brazil is now the country with the third highest number of confirmed coronavirus cases, reporting 262,545, with 17,509 reported deaths.

Brazil has now surpassed Britain, Spain and Italy in the past 72 hours on the list of total infections, and is behind only the United States (1.5 million) and (290,000).

Last month, experts at two of the country’s leading universities said under-testing could mean the real figures were 15 times higher or more than those recorded by the Ministry of Health.

The giant South American country of 210 million people is torn by a political battle over how to respond to the virus.

Far-right President Jair Bolsonaro compares the virus to a ‘little flu,’ condemns the ‘hysteria’ surrounding it and is urging the country to get back to work to stop an economic crash.

State and local authorities, however, are largely calling on citizens to stay home and practice social distancing – backed by the Supreme Court, which gave them the final say in the matter. 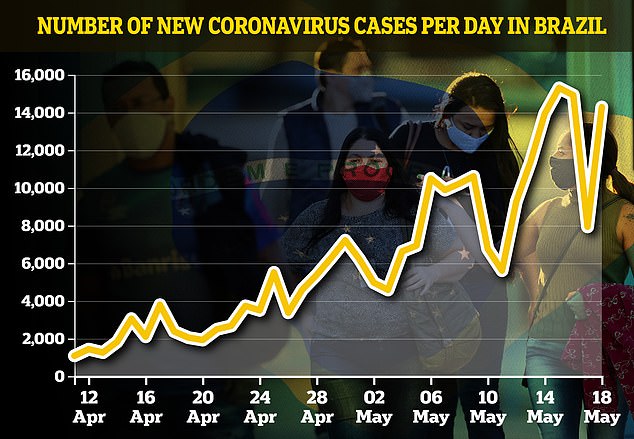 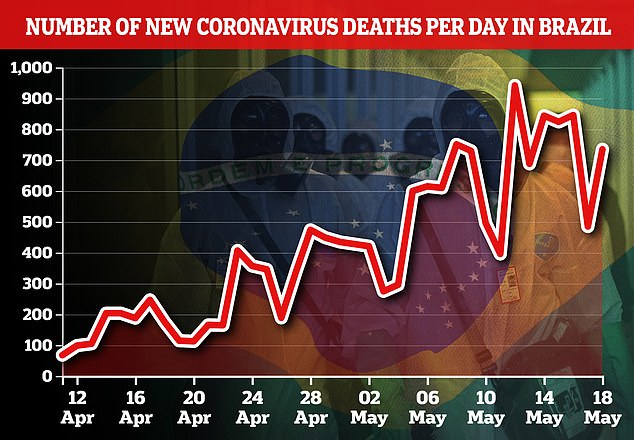 Bolsonaro is now seeking his third health minister since the pandemic began.

He fired the first after publicly battling over stay-at-home measures, and the second resigned last week after less than a month on the job, reportedly over the president’s insistence on widespread use of the controversial and unproven malaria drug chloroquine to treat the disease.

Hospitals in several areas are meanwhile operating close to full capacity, and the hardest-hit cities have begun burying victims in mass graves, even as the number of infections continues to soar.