Stay home… and drink! Boozy Britons bought more than ONE BILLION bottles of wine last year during pandemic – while sales of pre-mixed alcohol cans shot up by 20 per cent, survey reveals

Boozy Britons bought more than 1billion bottles of wine during the Covid pandemic, while sales of pre-mixed cans shot up by 20 per cent, figures show.

UK drinkers brought more than 1billion bottles of wine from supermarkets and shops during 2020 as hospitality businesses took a hit in sales, according to The Wine and Spirit Trade Association’s (WSTA) Market Report.

Supermarket sales of all types of alcohol were on the rise throughout the pandemic, while on-trade sales, meaning alcohol sold in pubs and restaurants, plummeted as venues were forced to close for months at a time.

Off-trade sales of red, rosé and white wine shot up by an average of 13 per cent compared to 2019 as people were urged to ‘stay home’ amid a string of Covid lockdowns, with rosé proving to be the most popular type of wine. 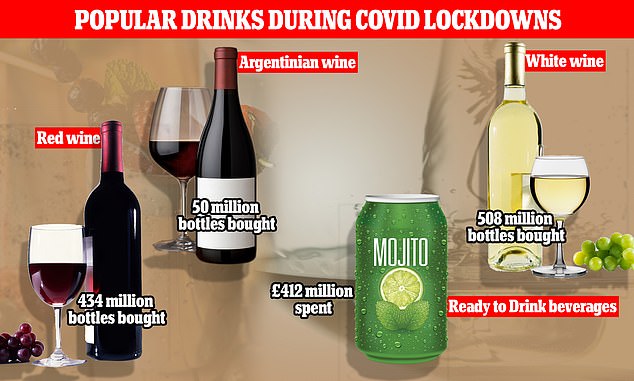 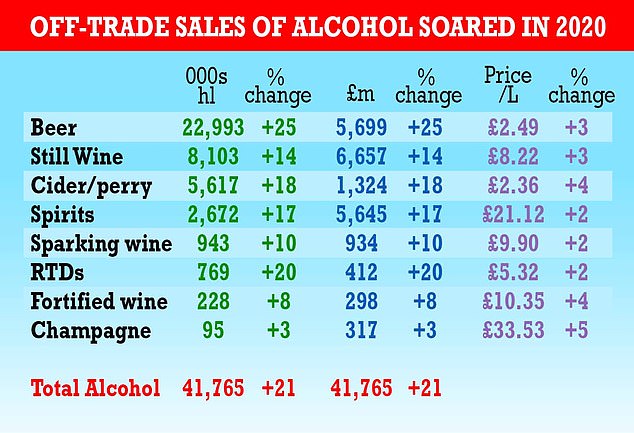 The best selling alcohol in the year leading up to December 26, 2020, was still beer, which saw a 25 per cent increase and sold almost 23million hectolitres, or around four billion pints, according to WSTA’s figures.

Other beverages that jumped off the shelves amid the Covid-19 lockdown were pre-mixed ready to drink (RTD) cans, with sales rising by 20 per cent from 2019, while cider also saw a 18 per cent increase in sales.

Wine proved itself to be a popular stay-at-home beverage, with rosé wine seeing the biggest increase in sales compared with the year before, as sales shot up by 21 per cent with more than 113million bottles sold.

Meanwhile, during the first lockdown, which came into force in March 2020, sales of Co-op’s premium rosé wine increased by as much as 186 per cent as shoppers were prepared to spend more to ‘make the most of at-home drinking occasions’.

According to WSTA’s data, sales of Argentinian wine shot up by a staggering 43 per cent, making it the variety of wine that saw the most improved sales amid the Covid-19 pandemic. 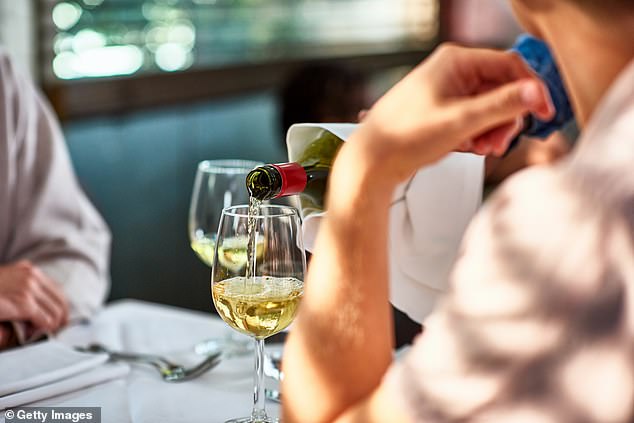 UK drinkers brought more than 1billion bottles of wine from supermarkets and shops during 2020, according to The Wine and Spirit Trade Association’s Market Report (stock image) 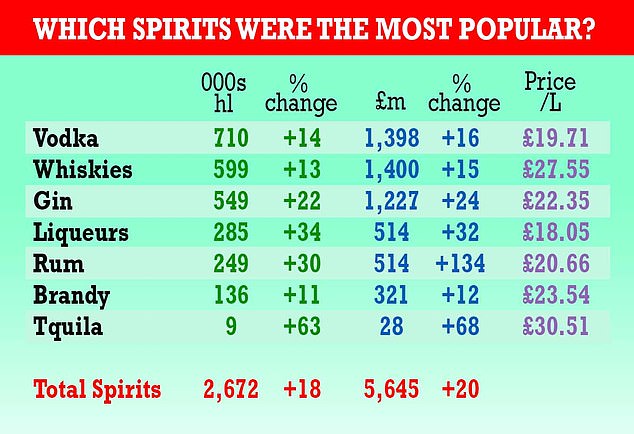 As well as being the most improved, it ranked as the eighth most popular wine, by country of origin, with Australia securing first place, followed closely by Italy and Chile, according to the WSTA report.

Overall, ninety-one million more bottles of wine were sold last year than in 2016 as the alcoholic beverage has become a more popular at-home drinking option in recent years.

Meanwhile, shoppers also spent a staggering £412million on RTD beverages, which include cans of gin and tonic and cocktail cans, up 23 per cent from 2019 and almost double five years ago.

Spirits proved to be a popular option for at-home drinkers, with many Britons trying to learn how to make cocktails at home so they could replicate their favourite pub beverage.

Tequila enjoyed the biggest growth in sales amid the Covid-19 pandemic, with 1million 75cl bottles – worth £28million – being sold across 2020, which was an increase of 63 per cent from 2019.

Flavoured vodka saw the second largest increase in sales among spirits, rising by 55 per cent compared with 2019, with Britons spending £95million on it. 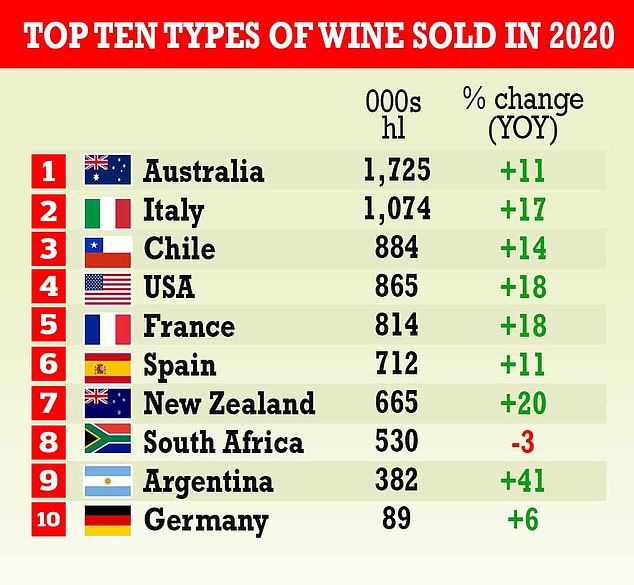 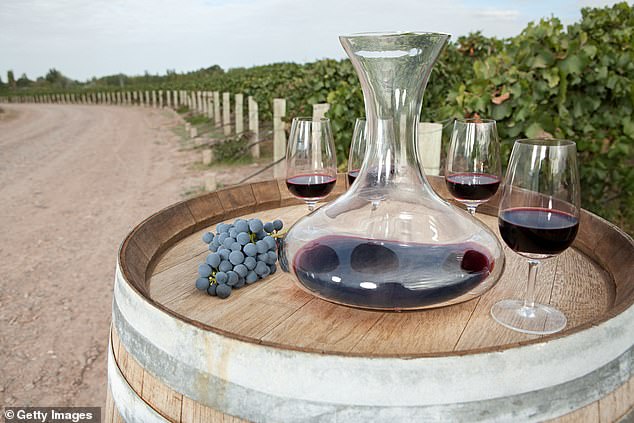 Britons also bought more Argentinian wine (pictured) last year, with sales shooting up by 41 per cent in the year leading up to December 26, 2020

It almost caught up with sales of non-flavoured vodka, which saw shoppers splash out more than £1billion on.

Miles Beale, Chief Executive of the Wine and Spirit Trade Association, said British drinkers tried out a range of different alcoholic drinks after their favourite pubs closed during the pandemic.

He added: ‘This has clearly benefited Argentinian wine makers who had been steadily gaining more UK customers in recent years but made a massive leap in sales last year.

‘Similarly rosé has been on the up in recent years but was given an extra boost in 2020 during the lockdowns and the warm weather. Interestingly the rosé trend continued during the winter months.

‘RTDs are another category which has been gaining ground at a rapid rate. Last year consumer curiosity and convenience drove a real boom in the variety of mixed drinks cans on the market, with consumers trying out new drink experiences in smaller packaging.’

Joe Turner, category manager for wine at Co-op, added: ‘Looking at last year, the unfortunate closure of the hospitality industry naturally had an impact on supermarket sales as customers were looking to recreate their favourite tipples at home.’