Businesses blacklisted and hit with scathing reviews over COVID stance

Small business owners who demand customers wear face masks and sign in with QR codes are being targeted by those with “fringe views”, who are bombarding them with scathing online reviews.

Anti-vaxxers and anti-maskers on the encrypted messaging app Telegram are regularly updating a blacklist of businesses boycotted for making customers comply with Victoria’s coronavirus rules. 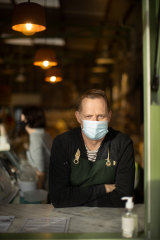 Grant Eastwood is the owner of Wild Things Food in Fitzroy North.Credit:Simon Schluter

“It’s appalling to hear that a small number of people pushing fringe views would do this,” said Small Business Minister Jaala Pulford.

She said people faced significant penalties if they refused to comply with public health directions.

“Our small businesses are doing great work to keep the rest of the country safe,” she said.

Organic grocery store owner Grant Eastwood was surprised to discover his business Wild Things Food in Fitzroy North was included on the blacklist, which also promotes businesses that are supposedly relaxed about enforcing COVID restrictions.

The listing followed staff refusing entry in October to a customer who wasn’t wearing a mask. The customer claimed they had a medical exemption and rejected the store’s offer of click and collect. A similar incident unfolded with another maskless customer in December.

In the months following, five reviewers left one-star ratings on Google, claiming the store was discriminatory.

“We are empathetic towards people who suffer from anxiety and trauma but it doesn’t change our policy on protecting our staff and other customers,” Mr Eastwood said. “We are not refusing service, we are just refusing entry.”

The customer initially posted about his experience at the Mornington Peninsula cafe on a Facebook page for Reignite Democracy Australia — which has been involved in several anti-lockdown rallies in Melbourne — and claimed he wasn’t wearing the mask for medical reasons. Another member of the page responded: “Everyone should give them a bad rating.”

In the days that followed, four people posted one-star reviews of the cafe and accused the small business owner of discrimination. “How dare you refuse service to someone for not wearing a rag over their face,” a one-star reviewer on Google wrote. “I hope you go broke.”

Ms Sok said the experience left her so shaken she closed her shop for a day.

“It is very bad for us,” she said. “I was so upset. They never said they had medical issues.” 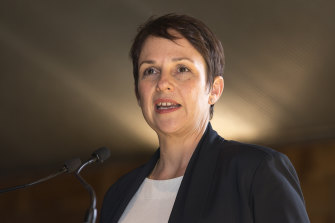 Council of Small Business Organisations Australia acting chief executive Alexi Boyd said she was appalled by the behaviour. Negative reviews could make or break a business, she said.

She said the state government’s expectation that small businesses enforce COVID-19 rules was unreasonable and had led to anxiety and customer abuse.

“It is a real kick in the guts when you’re in a situation that is out of your control and are then targeted by fringe-dwellers who are misinformed and using social media as a power play.”

It’s not just anti-vaxxers and anti-maskers leaving the negative reviews – compliance vigilantes have ambushed businesses that they perceive are too lax.

Daniel Ruscigno, who owns The D’s Souvlaki food truck in Airport West, received hundreds of negative reviews last week after posting a photo on Facebook that showed him putting up his middle finger at a QR code. In the same post, he asked his customers to sign in using QR codes.

The fake reviews accused Mr Ruscigno of being unhygienic and making customers ill and his Google rating dropped from 4.6 to 3.9 stars. “I have worked hard to build the reputation of my business,” he said. “To read the reviews that I don’t wash my hands … is really unnecessary.”

He said he was not opposed to QR codes, but fed up with four lockdowns and having to enforce evolving COVID rules.

Julian Dight, a teaching fellow at the University of New South Wales law school, said businesses with fewer than 10 employees could sue individuals if they posted misleading and deceptive reviews.

But he said proving the reviews were fake could be difficult, and there was a low risk of an individual being successfully sued due to recent changes to defamation laws.

“[These] require a plaintiff to establish they suffered or are likely to suffer serious harm as a result of the alleged defamatory imputations,” he explained.

Stay across the most crucial developments related to the pandemic with the Coronavirus Update. Sign up for the weekly newsletter.