The dispute between Tesla and California health authorities over the reopening of a factory in the face of shutdown orders appears to be coming to an end.

The Alameda County Public Health Department announced on Twitter early Wednesday that the Fremont, California, plant will be able to go beyond basic operations this week and start making vehicles this coming Monday – as long as it delivers on the worker safety precautions that it agreed to.

It wasn’t clear from a press release whether Tesla would face any punishment after controversial CEO Elon Musk called the plant’s 10,000 workers back on Monday and restarted production in defiance of county orders.

The release said Fremont police would verify whether Tesla was holding up its part of the agreement adding that public health indicators have to remain stable or improve for the factory to stay open.

‘We will be working with the Fremont PD to verify Tesla is adhering to physical distancing and that agreed upon health and safety measures are in place for the safety of their workers as they prepare for full production,’ the Alameda County Public Health Department release said.

The plant in Fremont, south of San Francisco, had been closed since March 23 in an effort to prevent the spread of the coronavirus, and Musk’s Monday restart went against county orders.

Workers could still be seen at the factory on Tuesday and the car park was full of employees’ cars.

Early on Tuesday, Musk sent an email to all workers congratulation them on an ‘honest day’s work’. 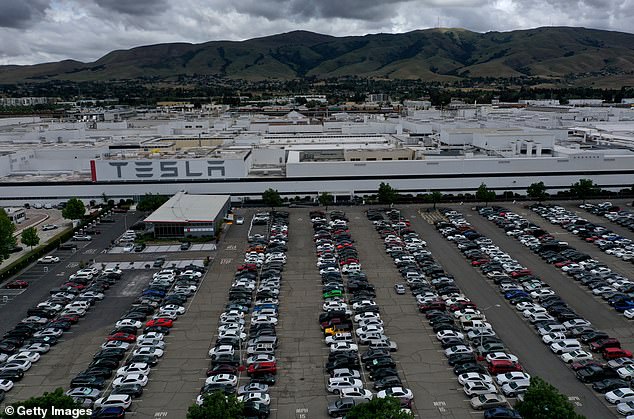 An aerial photograph of the car park outside of the Tesla gigafactory in Fremont, California on Tuesday was full as the factory opened for a second day in defiance of county orders

But the reopening defied orders from the health department, which has deemed the factory a nonessential business that can’t fully open under restrictions intended to slow the spread of the novel coronavirus.

The decision came after the county ordered Tesla to cease production at the plant earlier on Tuesday, the strongest action taken by the local government against the company’s defiance of the public health orders.

The Health Department said Monday it warned the company was operating in violation of the county health order, and hoped Tesla will ‘comply without further enforcement measures’ until the county approves a site-specific plan required by the state.

State law allows a fine of up to $1,000 a day or up to 90 days in jail for operating in violation of health orders. 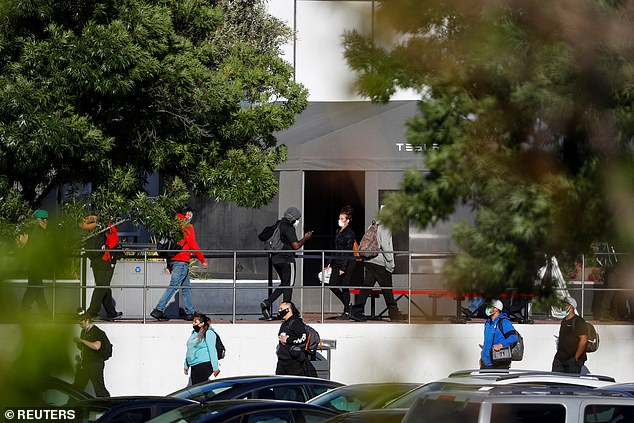 Tesla factory workers in protective face masks queue for a shuttle bus at Tesla’s gigfactory in Fremont, California on May 12 after Tesla opened the factory in defiance of county orders 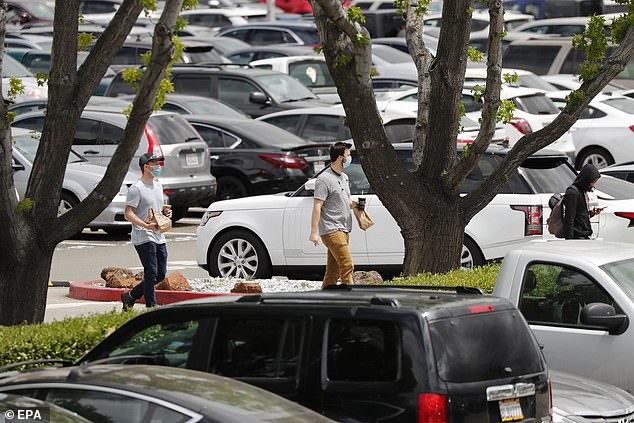 Workers could be seen arriving for work in face masks, walking through the huge employee car park outside the factory that was almost full on Tuesday

Early on Tuesday morning, Elon Musk sent an email to all Tesla employees congratulating them on the reopening of the factory.

‘An honest day’s work spent building products or providing services of use to others is extremely honorable,’ Musk wrote in the email, obtained by The San Francisco Chronicle.

‘I have vastly more respect for someone who takes pride in doing a good job, whatever the profession, than some rich or famous person who does nothing useful.’

The San Francisco Chronicle reported that some production lines had been operating over the weekend, with some employees even returning as early as last week.

Alameda County Health Care Services Agency Director Colleen Chawla sent a letter earlier on Tuesday reiterating that Tesla could only perform basic functions at the factory, until the plant and the county had agreed safety conditions.

Following a meeting with Tesla and county officials on Tuesday, the Alameda County Sheriff’s Office tweeted: ‘We reviewed the plan and held productive discussions today with Tesla’s representatives about their safety and prevention plans, including some additional safety recommendations.’

‘If Tesla’s Prevention and Control Plan includes these updates, and the public health indicators remain stable or improve, we have agreed that Tesla can begin to augment their Minimum Business Operations this week in preparation for possible reopening as soon as next week.’ 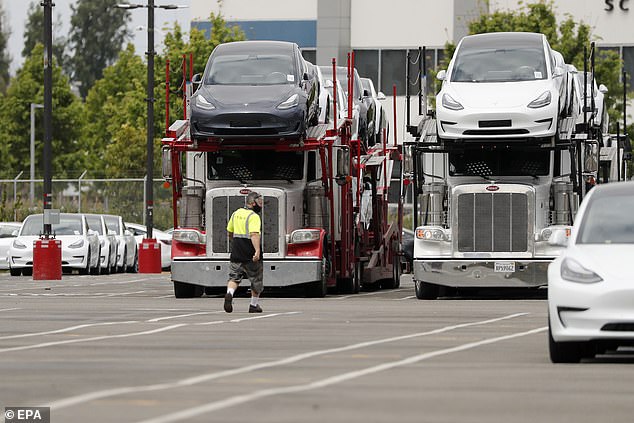 Operations at the plant started again after being shut down on March 23 as the county implemented measures to slow the coronavirus. Pictured: A man walks towards semi-trucks loaded with Tesla cars 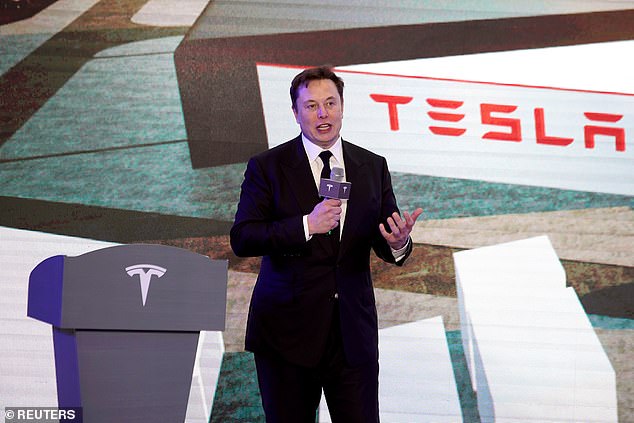 Elon Musk, Tesla’s CEO, has been in an on-going battle to get the factory reopened, threatening to move Tesla to a different state if the factory was not reopened

After calls from President Trump on twitter calling for California to allow Tesla to keep the plant open, and Musk subsequently thanking the president for his support, Alameda County Supervisor Scott Haggerty hit back.

‘I guess if it was from Dr. Fauci, I would probably pay attention a little bit more than somebody who told us to drink disinfectant,’ Scott Haggerty said.

Haggerty’s criticism was referencing Trump’s suggestion in April that injecting people with disinfectant and using UV light could be a treatment for the coronavirus.

The President, 73, was heavily criticised for the remarks, and many scientists and cleaning companies advised people not to ingest the highly toxic products, and Trump later said his comments were sarcastic.

Haggerty reportedly helped efforts to persuade Tesla to open its factory in Fremont County, and had been in conversations over the last few weeks to get the factory reopened while also following health guidelines.

He said that the original plan was to open the production facility next week, and that Alameda County Health Officer Dr. Erica Pan had said that May 18 was the likely date.

‘Tesla opening before that date was certainly unfortunate. Dr. Pan has been very transparent that May 18th was the date she would like to see the major employer open up again,’ Haggerty said.

The factory has been deemed non-essential by the county since March 23, requiring it to shut its doors.

Late on Tuesday night, Tesla submitted a plan to demonstrate that it could open safely, and Haggerty said that the plan would be approved soon.

‘I can’t speak specifically to the plan that was handed in late last night. What I can say is the dialogues I was involved in. It’s going very well and some early plans I had seen, they looked very good,’ Haggerty said.

Fremont CityCouncil member Vinnie Bacon was also hopeful that the plan could be approved, but also urged Tesla to be patient, saying that safety should come first and the car giant should be directed by Alameda County.

Despite the orders from the county to not reopen until next week, Tesla employees could still be seen arriving for work at the factory, as large car carrier trailers were driven around outside the plant moving Tesla vehicles.

According to Business Insider, three employees said Tesla asked workers to return to the facility on Monday with phone calls and text messages. If they refused, they risked losing their jobs, the sources claimed. 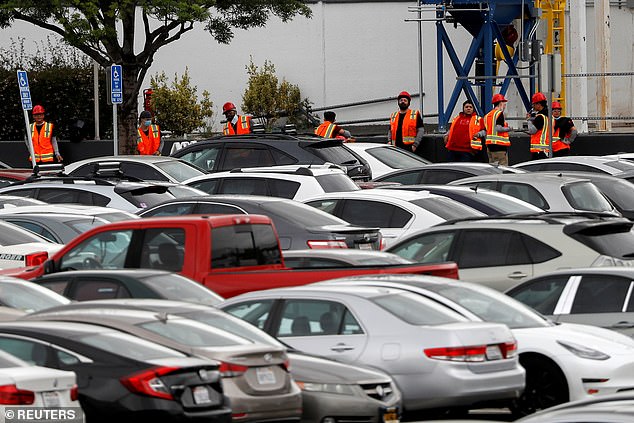 On Monday evening, Musk confirmed in a tweet that Tesla was restarting production at the facility ‘against Alameda County rules.’

‘I will be on the line with everyone else,’ he continued. ‘If anyone is arrested, I ask that it only be me.’

Tesla filed a lawsuit against local officials on Saturday for ordering the the Fremont facility to shutter until June, a date which appears to have been revised since.

Musk called the order ‘super messed up’ in a separate tweet Monday, claiming that ‘all other auto companies in US are approved to resume. Only Tesla has been singled out.’

Elon Musk said on Monday that he was restarting production, and dared county officials to arrest him. He claimed Tesla has been singled out in not being allowed to reopen

Employees were seen reporting to the plant before sunrise on Monday in footage from local media outlet KPIX.

Within hours, the parking lot was nearly full at the plant – which employs 10,000 workers – and semis were seen driving off loaded with vehicles that may have been produced before the shutdown. The Verge reports the company has since completed work on around 200 Model Y and Model 3 vehicles.

Under the state’s shelter-in-place orders, only essential business are permitted to operate in California. State law allows a fine of up to $1,000 a day or up to 90 days in jail for operating in violation of health orders.

Musk has consistently pushed for Tesla to be considered essential, routinely voicing his frustration over the continued shutdown of the company’s biggest plant over the last few weeks.

The CEO said the shutdown should be viewed as a ‘serious risk’ to Tesla’s business during an April 29 conference call, and then went on profanity-laden rant about how the shutdowns were antithetical to America’s founding principles.

Earlier Monday, Gov. Gavin Newsom said he expected Tesla to be able to reopen the plant sometime next week.

‘My understanding is they have had some very constructive conversations,’ Newsom said during a video press conference. ‘My belief and hope and expectation is as early as next week, they will be able to resume.’ 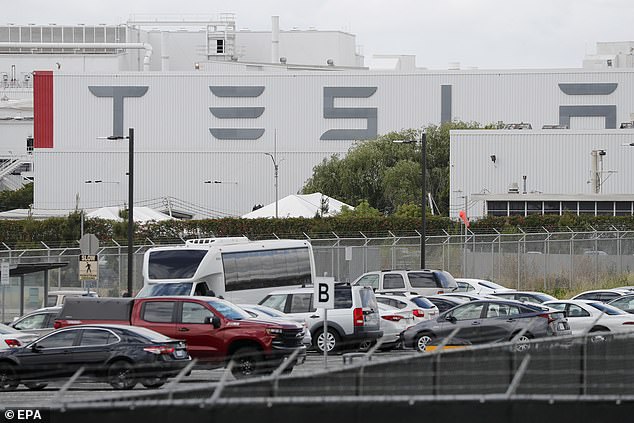 The Tesla factory employs 10,000 people in Fremont county, and has been told that it must adhere to coronavirus safety guidelines if it is to be allowed to reopen 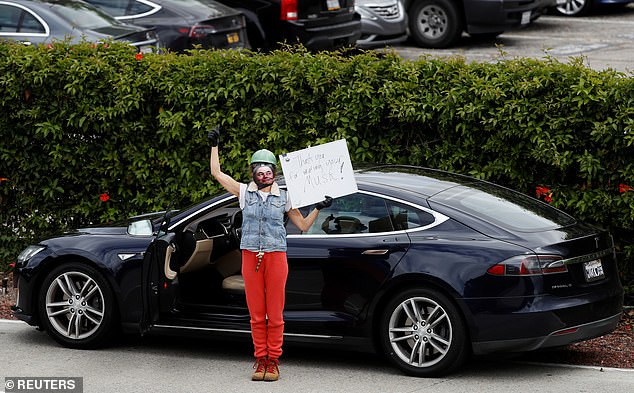 A woman is pictured outside the Tesla factory wearing a mask with Elon Musk’s face on in, holding a sign that reads ‘thank you for wearing your Musk’

Public health experts have credited the stay-home orders with slowing the spread of novel coronavirus, helping hospitals handle an influx of cases. The coronavirus causes mild or moderate symptoms for most people. But it has killed more than 80,000 people in the U.S., with the death toll rising.

Alameda County was among six San Francisco Bay Area counties that were the first in the nation to impose stay-at-home orders in mid-March. Gov. Gavin Newsom has repeatedly said that counties can impose restrictions that are more stringent than state orders.

The order in the Bay Area has been extended until the end of the month, but the counties plan to allow some limited business and manufacturing starting May 18, the same day Detroit automakers plan to reopen auto assembly plants. Some auto parts plants were to restart production this week.

The Detroit automakers’ 150,000 U.S. workers are represented by the United Auto Workers union, which has negotiated for added safety precautions. Tesla’s workers do not have a union.

Musk, whose company has sued Alameda County seeking to overturn its order, threatened to move Tesla’s manufacturing operations and headquarters from the state.

Tesla contends in the lawsuit that Alameda County can’t be more restrictive than orders from Newsom.

The lawsuit says the governor’s coronavirus restrictions refer to federal guidelines classifying vehicle manufacturing as essential businesses that are allowed to continue operating.

Tesla relesed a plan to maintain worker safety, including the wearing of gloves and masks, installing barriers between workers and maintaining social distancing.

Haggerty said the company initially pushed back on checking employee temperatures before boarding a company bus to get to work. But Tesla relented, he said, and agreed to check workers. 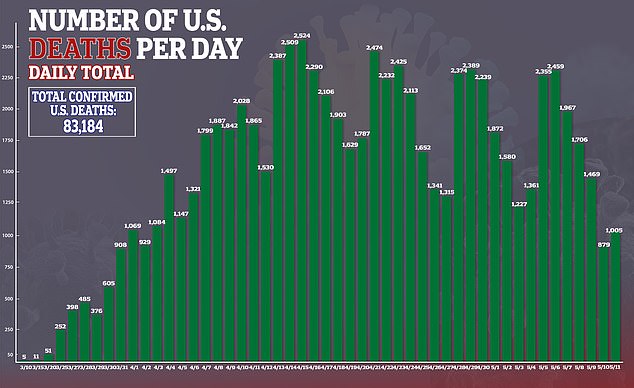