Canoeists struggle to paddle through jellyfish size of dinner plates

Wobbly moment! Canoeists struggle to paddle through a swarm of jellyfish the size of dinner plates

A group of canoeists had a more eventful trip out to sea than expected when they came across a massive swarm of jellyfish.

The canoeists were forced to paddle through the fish in the Sea of Azov off the  coast of Berdyansk, in the south-eastern Ukrainian region of Zaporizhia Oblast.

Video footage, posted on YouTube on August 15, shows the swarm of jellyfish, which were the size of dinner plates, covering the surface of the water. 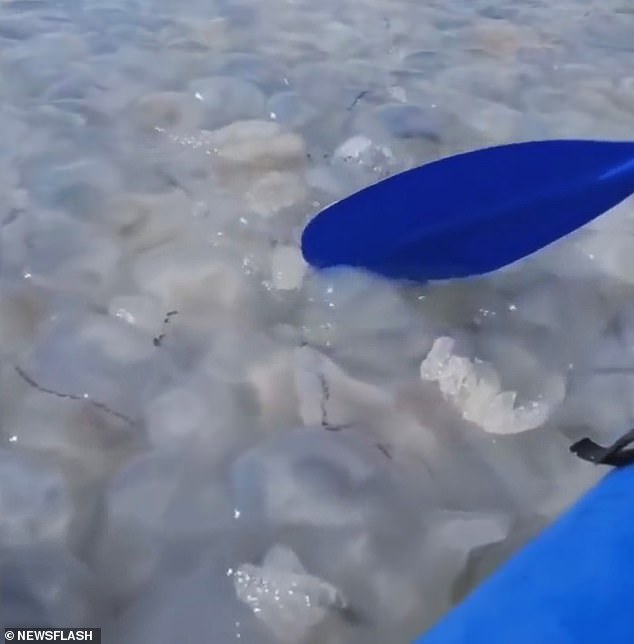 Canoeists were forced to paddle through a giant swarm of jellyfish in the Sea of Azov, off the the coast of Berdyansk, Ukraine

Kissel is a fruit jelly dessert.

The footage has been viewed more than 113,000 times on YouTube, with one user commenting that this year there have been more jellyfish than they have ‘ever seen’ before.

There were reports of thousands of dead jellyfish washing up on the Crimean Peninsula a few months ago, but the person filming said these jellyfish were very much alive.

The area is a common spot for jellyfish, but not in these quantities, according to the news site Lenta. 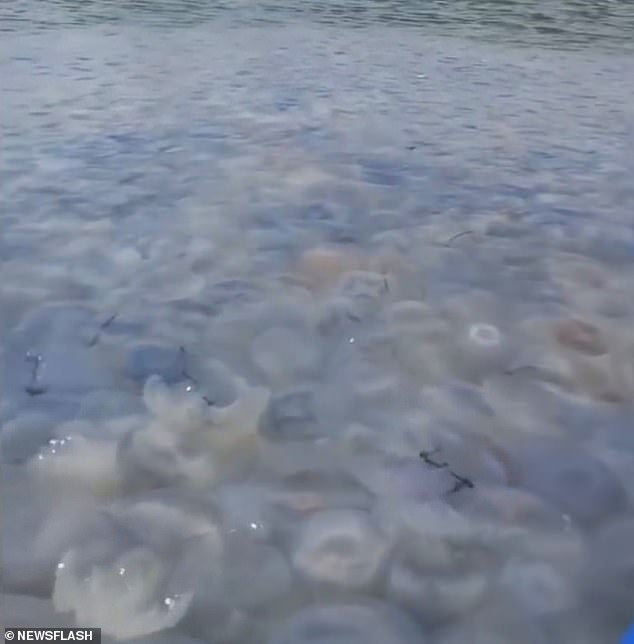 Video footage, posted on YouTube on August 15, shows the unnerving cluster of jellyfish covering the entire surface of the ocean 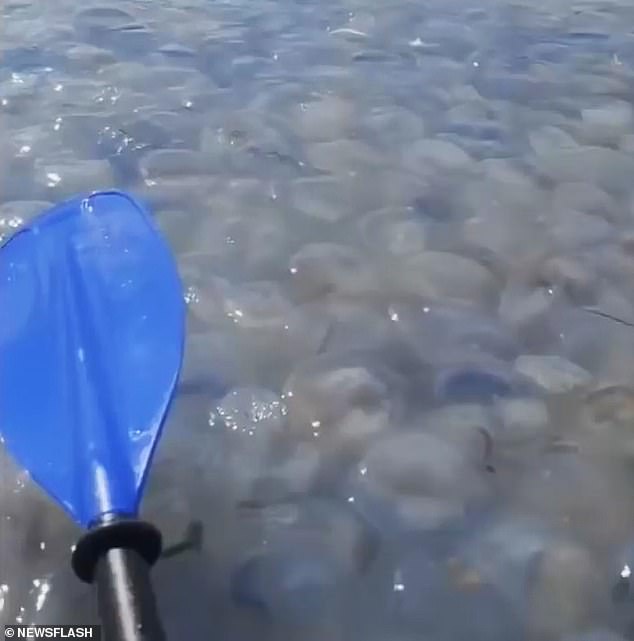 The footage, which has been viewed more than 113,000 times, shows the canoeists struggling to move their paddle through the dense mass of jellyfish

Both the Black Sea and the Sea of Azov see large concentrations of jellyfish, including the Aurelia aurita and Kornerot, but deadly poisonous species are not found there, Our Planet reported.

Aurelia aurita, also known as moon jelly or Long-eared Aurelia, grow up to 25-40cm and are commonly found in estuaries and harbours.

The amount of jellyfish clusters depends on the direction of currents and water temperature, with storms also washing jellyfish towards the shore.

Deputy director of the Research Institute of Fisheries and Marine Ecology, Konstantin Demyanenko, claimed the increase in the jellyfish population is related to the water becoming saltier.

He said: ‘In the Sea of Azov, this figure is now 14 ppm (parts per million), which is one-and-a-half times higher than in the 1990s. And also, climate change causes an effect.’