The bill aims to ban what Beijing deems as secession, subversion, terrorism and foreign interference in the city amid mounting fears that the Communist Party intends to take full control of the semi-autonomous city.

Meanwhile, riot police were deployed across Hong Kong today after mass protests yesterday as lawmakers debated a bill that would criminalise disrespect of China’s national anthem and Washington piled on the pressure to preserve the city’s autonomy.

US Secretary of State Mike Pompeo said Hong Kong no longer qualified for special treatment under US law, potentially dealing a crushing blow to its status as a major financial hub. 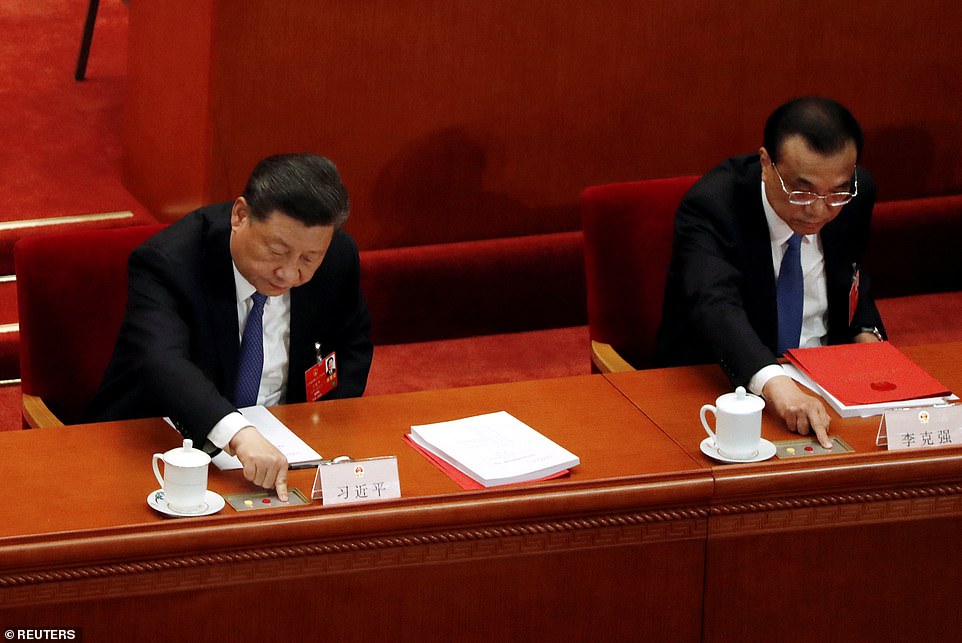 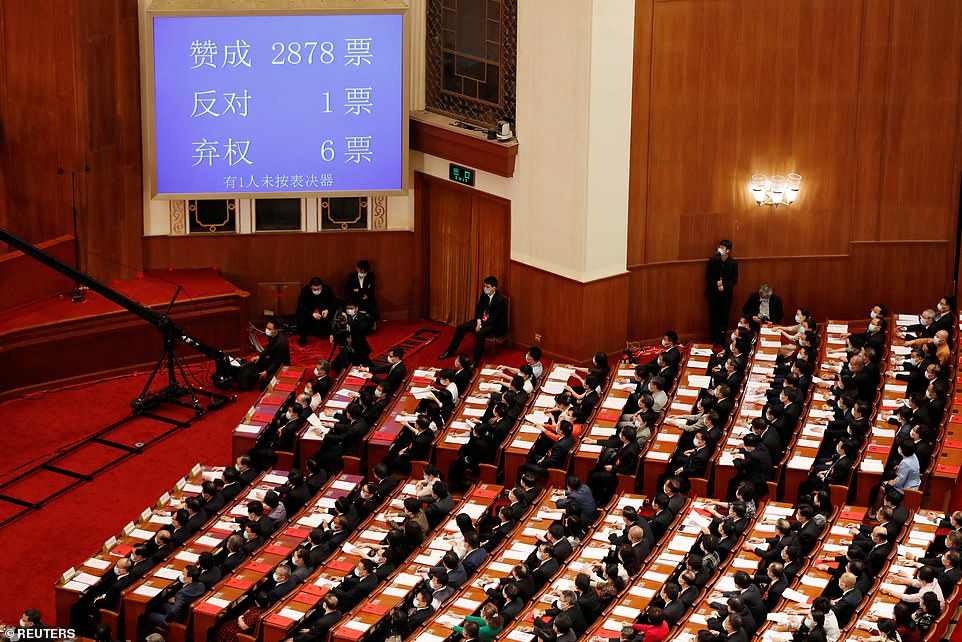 The National People’s Congress voted 2,878 to 1 in favour of the decision to empower its standing committee to draft the Hong Kong national security legislation, with six abstentions 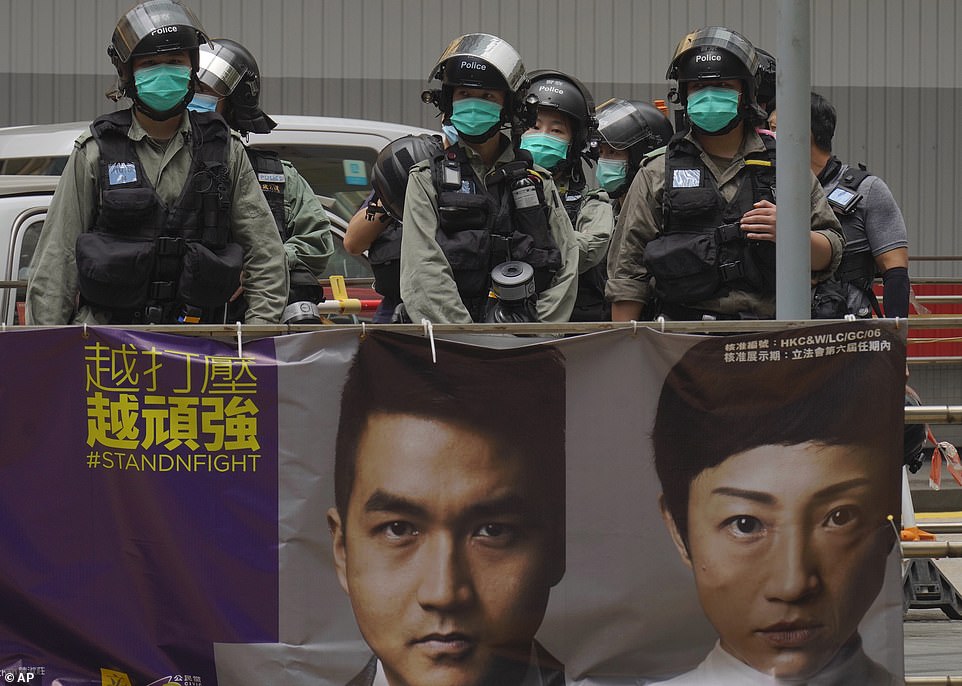 Meanwhile, riot police were deployed across Hong Kong today after mass protests yesterday as lawmakers debated a bill that would criminalise disrespect of China’s national anthem

The security law was ‘only the latest in a series of actions undermining Hong Kong freedoms, Pompeo told Congress.

‘No reasonable person can assert today that Hong Kong maintains a high degree of autonomy from China, given facts on the ground,’ he said.

China says the law was necessary because Hong Kong has become a ‘national security risk’ following years of anti-Beijing demonstrations.

But the move prompted immediate warnings that the law would be used to persecute protesters, and China could bring charges of subversion and terrorism against them.

Critics say the act would lead to the widespread use of secret police, arbitrary detentions, surveillance and even control over the internet on the island territory.

The Chinese National People’s Congress passed the Hong Kong bill at its closing ceremony in Beijing this afternoon local time. The law is expected to be enacted before September.

The National People’s Congress voted 2,878 to 1 in favour of the decision to empower its standing committee to draft the legislation, with six abstentions.

The legislators gathered in the Great Hall of the People burst into sustained applause when the vote tally was projected onto screens. 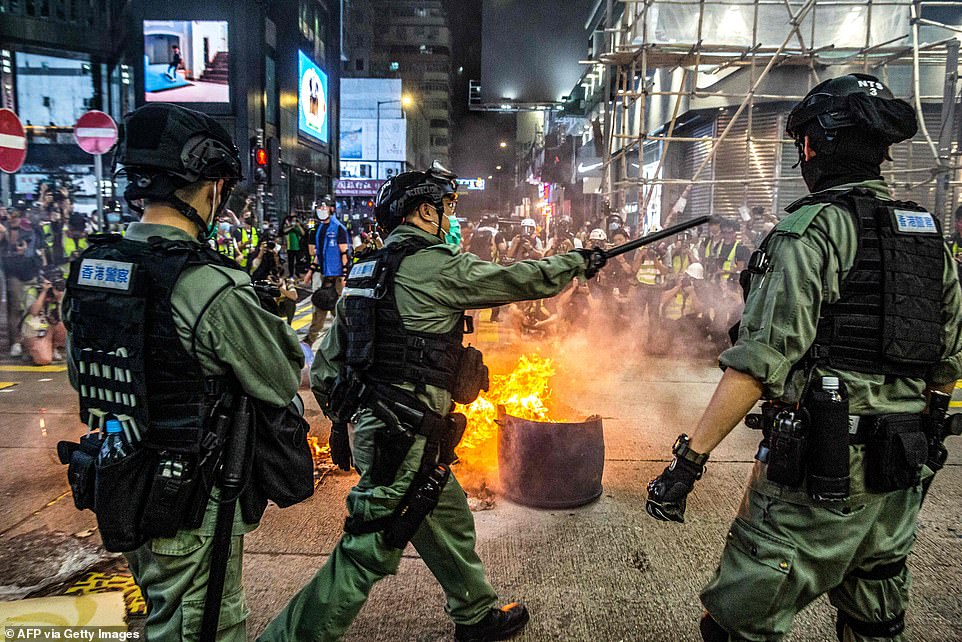 Police fired pepper pellets and made 360 arrests in Hong Kong on Wednesday as thousands took to the streets in anger to protest against Beijing’s tightening grip. Pictured, police stand guard on a road to deter pro-democracy protesters from blocking roads in Mong Kok 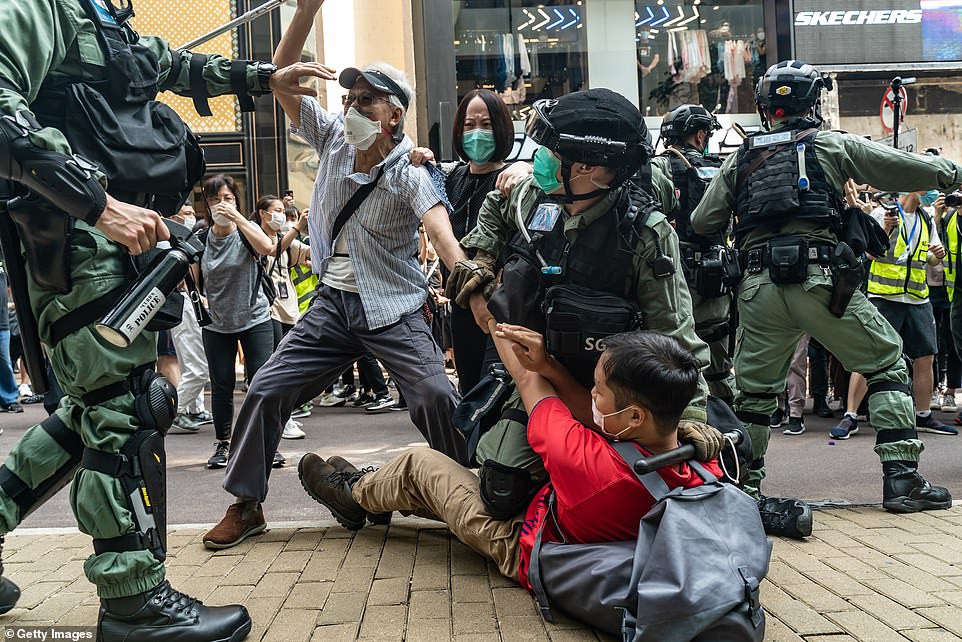 Pro-democracy supporters are pictured scuffling with riot police during an detention at a rally in Causeway Bay district on Wednesday. The national anthem and national security bills have re-ignited the anti-government unrest which started in June last year in the Asian financial hub 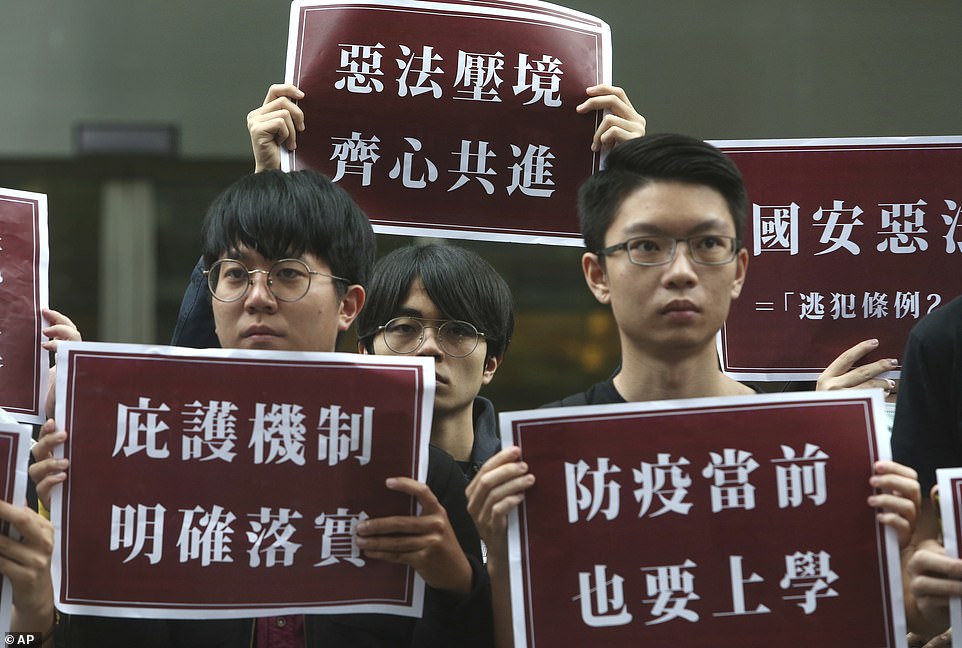 Hong Kong students and Taiwanese supporters hold slogan reading ‘Evil Law Under the Pressure of the Border, Work Hand in Hand’ and ‘The asylum mechanism is clearly in place’ during a protest against Beijing’s national security legislation in Taipei on Thursday

The new security law could see Chinese intelligence agencies set up bases in the city that was given a high degree of autonomy under the ‘one country, two systems’ terms of its 1997 handover to China by former colonial power Britain.

Chinese authorities and the Beijing-backed government in Hong Kong say there is no threat to the city’s high degree of autonomy and the new security law would be tightly focused.

The United States and China clashed over Hong Kong at the United Nations on Wednesday after Beijing opposed a request by Washington for the Security Council to meet over the national security legislation.

The US mission said it was ‘a matter of urgent global concern that implicates international peace and security’. China said the legislation was an internal matter. 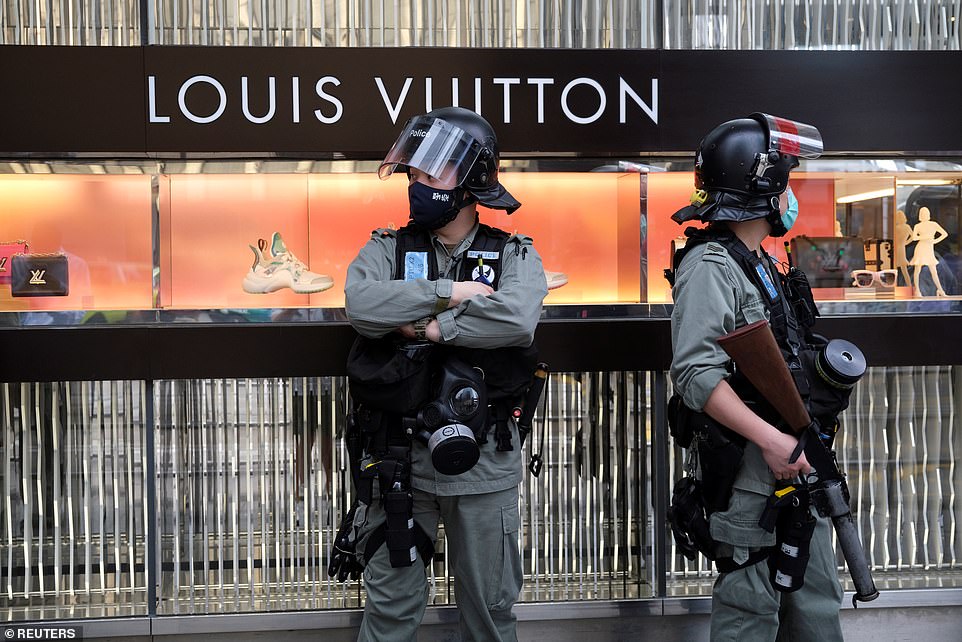 Riot police stand guard outside a Louis Vuitton shop during a protest against Beijing’s plans to impose national security legislation in Hong Kong on Thursday. The bill has been approved 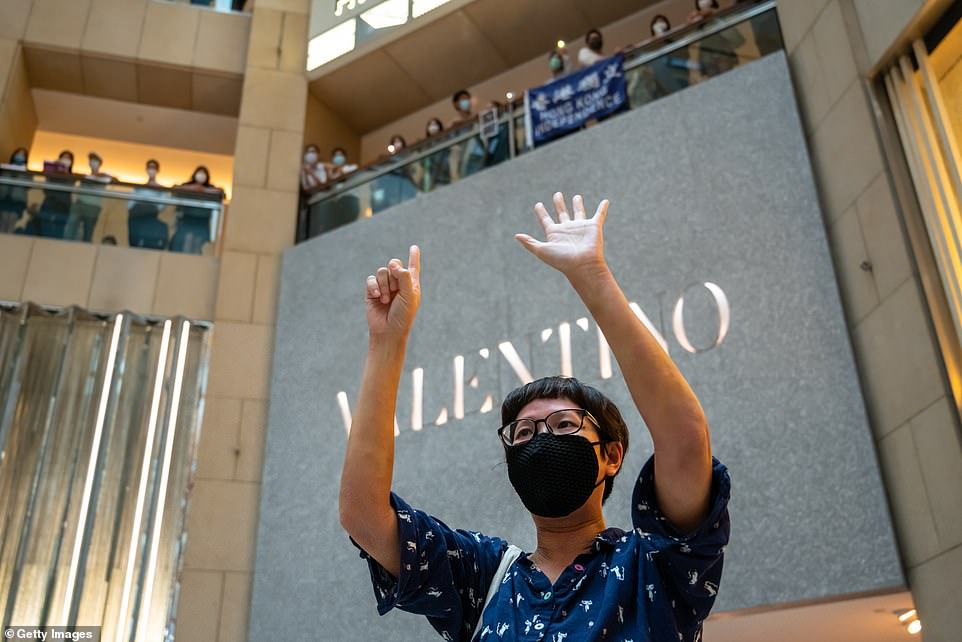 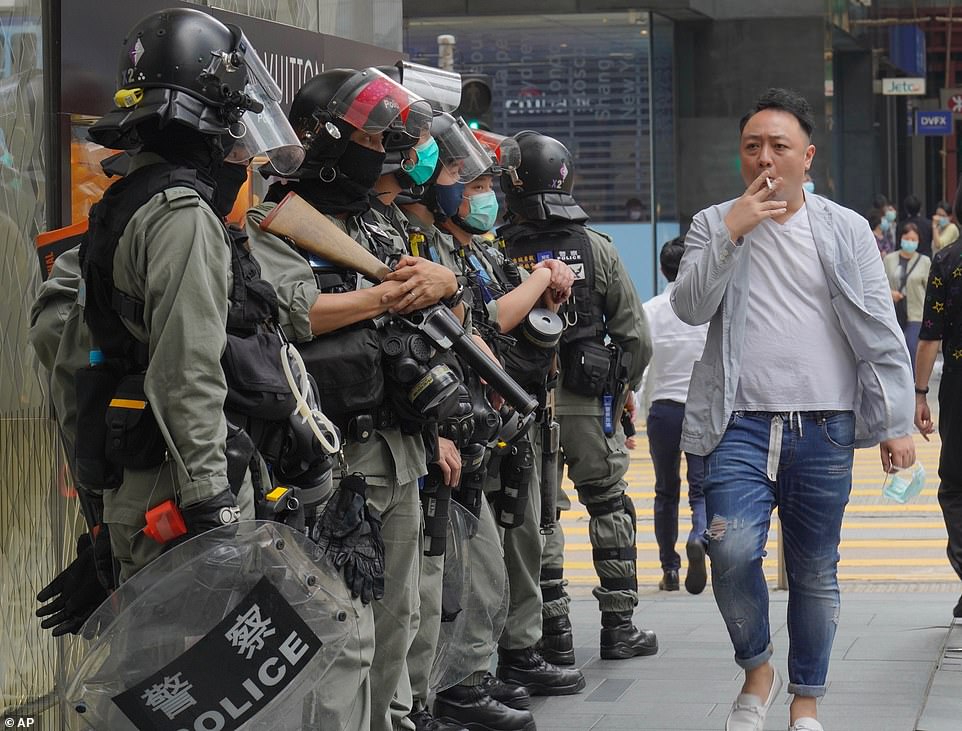 Police fired pepper pellets and made 360 arrests on Wednesday as thousands took to the streets in anger over the anthem bill and national security legislation proposed by China that has raised international alarm over freedoms in the city.

On Thursday, dozens gathered in a shopping mall, chanting ‘good kids don’t become cops,’ and ‘reclaim Hong Kong’ as the Hong Kong’s parliament continued to debate over the bill – the latest spark of anti-government unrest in the semi-autonomous city.

Three pro-democracy lawmakers were ejected from Hong Kong’s legislative chamber Thursday morning, disrupting the second day of debate on the contentious bill that would criminalise insulting or abusing the Chinese national anthem.

The United States, Britain and the European Union have expressed concern about the Hong Kong national security law, and its implications for China’s freest city and one of the world’s financial hubs.

Lord Chris Patten, the last British governor of Hong Kong, has called on world leaders to stand up to Beijing and help Hong Kong fight for its freedom in a column on the Financial Times. 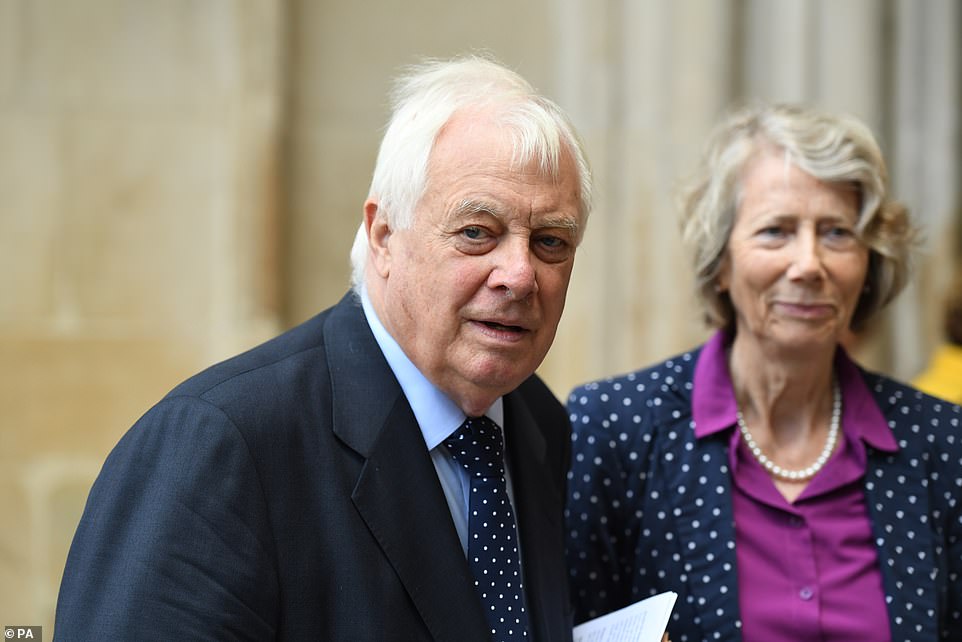 Lord Chris Patten, the last British governor of Hong Kong, has called on world leaders to stand up to Beijing and help Hong Kong fight for its freedom. Lord Patten has also described the new law as ‘a frontal assault’ on the relative freedoms granted to the semi-autonomous city 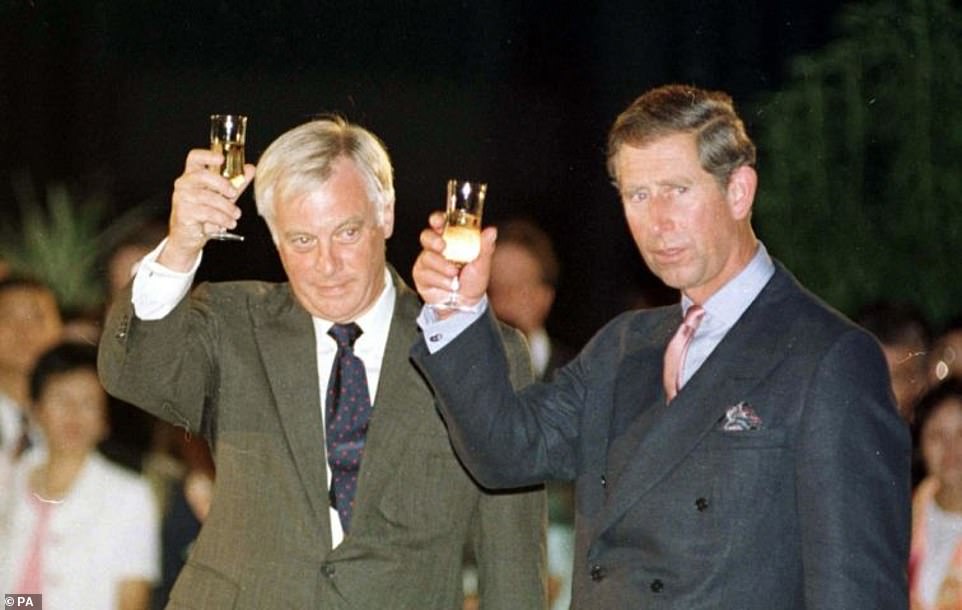 Lord Patten has also described the new law as ‘a frontal assault’ on the relative freedoms granted to the semi-autonomous city.

He said Britain must act over the ‘disgraceful breach’ of China’s international treaty obligations, and branded the Communist Party ‘a very nasty, brutal, bullying and mendacious regime’.

China’s troops have said that they are ready to ‘smash’ any protests against the bill.

The Chinese Ministry of Foreign affairs said on Wednesday that China would take necessary countermeasures to foreign interference regarding the new legislation.

Ministry spokesman Zhao Lijian made the remarks during a daily briefing in response to a question about US President Donald Trump’s comments that Washington is working on a strong response to the legislation that will be announced before the end of the week.

What is China’s new national security law for Hong Kong?

China is taking matters into its own hands after last year’s tumultuous anti-government protests in Hong Kong that often descended into tear gas-filled clashes.

In a surprise move, the central government announced last week that it would develop laws to outlaw secession, subversion, terrorism and foreign interference in Hong Kong.

The National People’s Congress approved the bill on May 28, and legislation could be finalised this summer. 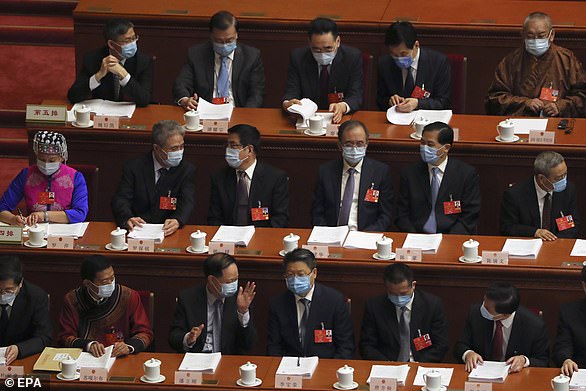 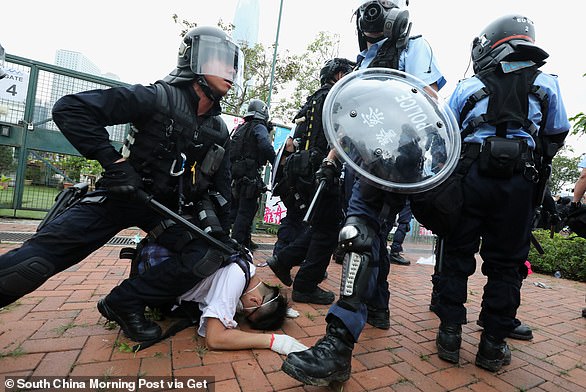 Sources said the laws would ban secession, foreign interference, terrorism and all seditious activities aimed at toppling the central government in the former British colony. Pictured: Police hold down a protester in Hong Kong on June 12, 2019

The proposal the Congress endorsed is really a guideline for future steps. It tasks the legislature’s Standing Committee, a smaller body with decision-making authority, with developing specific laws at future meetings.

Two items in the seven-article draft are getting particular attention. One is the possible deployment of state security. The other is the bypassing of Hong Kong’s legislature by crafting and approving the laws in Beijing.

The Hong Kong government is required to enact national security legislation under Article 23 of the Basic Law, its constitution, but has been unable or unwilling to do so because of opposition. An attempt in 2003 was abandoned in the face of huge protests. 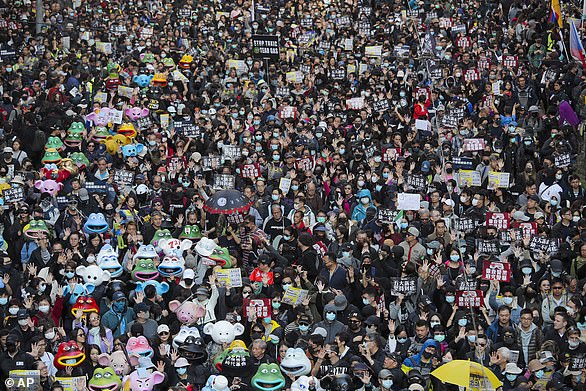 Fears have risen that China is eyeing to take full control of the city as the potential legislation could be a turning point for its freest and most international city. FILE: Pro-democracy protesters march on a street during a protest in Hong Kong last December 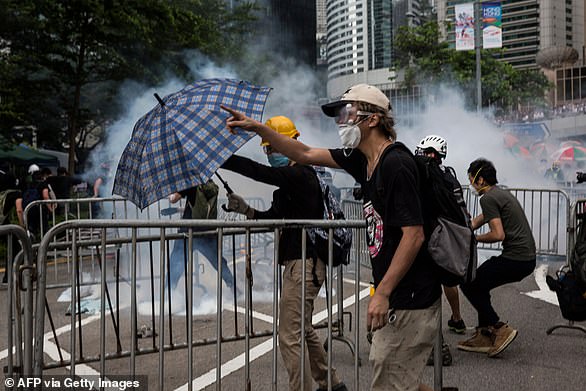 A group of pro-democracy protesters wearing masks are pictured reacting after police fired tear gas during anti-government demonstrations in Hong Kong on June 12, 2019

China dropped its bombshell the day before the opening of the annual National People’s Congress on May 22. In the wake of last year’s protests, the most violent since China took back the former British colony in 1997, it said it was stepping in.

Technically, the central government can do this, but it doesn’t look good.

Article 18 of the Basic Law says that the congressional Standing Committee can add laws on defence, foreign affairs and other matters outside Hong Kong’s autonomy. National security falls into that.

After the initial announcement, the biggest shock came in Article 4 of the proposal, which reads in part: ‘When needed, relevant national security organs of the Central People´s Government will set up agencies in (Hong Kong) to fulfill relevant duties to safeguard national security.’

Speculation swirled. Would Chinese police be able to arrest people in Hong Kong? Would arrested protesters be questioned by both local and national police?

‘This may be worrisome. It depends on what the bill says about what powers these people have,’ said Albert Chen, a constitutional law scholar at Hong Kong University and member of a committee that advises the congressional Standing Committee on the Basic Law.

‘If these people have powers of arrest, of search of people´s home or offices, I think people would find it very difficult to accept that,’ he said.

Details may emerge at upcoming committee meetings in late June and late August.