Singapore: The Chinese economy hit a record growth rate of 18.3 per cent in the first three months of this year, capping a remarkable 12-month turnaround from the depths of the coronavirus crisis.

The year-on-year figure, announced by the National Bureau of Statistics on Friday morning, was driven by a 34 per cent lift in retail sales, a 26 per cent increase in infrastructure investment and a 14 per cent rise in industrial production. 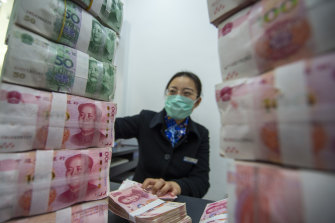 China’s economy grew by more than 18 per cent in year-on-year terms. Credit:Getty

The milestone, China’s highest quarterly growth figure since records began almost three decades ago, comes from a very low base. The country’s economic activity collapsed in the first quarter of 2020 as provinces went into lockdown during the first wave of the COVID-19 pandemic.

“The economic snap-back has been breathtaking with China the only major economy to record positive annual GDP growth in 2020,” said Commsec senior economist Ryan Felsman.

The recovery will be a key driver of Australia’s economic fortunes over the coming year. Despite the relationship between the two countries falling to historic lows over multiple diplomatic disputes, Australia’s $9-billion trade surplus in January was driven by China’s demand for Australian iron ore. The value of exports to China increased by 21 per cent in December as the price of iron ore surged on the back of supply shortages. 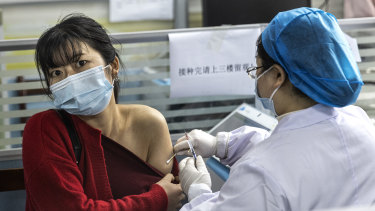 Residents receive the COVID-19 vaccine at a community hospital in Wuhan in April. Credit:Getty

In remarks first reported by Chinese media outlet The Paper, Dr Fu said the vaccines “don’t have very high protection rates,” and “it was now under formal consideration whether we should use different vaccines from different technical lines for the immunisation process.”

China’s Sinovac Biotech’s vaccine CoronaVac, which has been distributed to Indonesia and Brazil among others, has reported a rate of 50.4 per cent in Brazilian trials. The level is well below the 90 per cent efficacy rates of Pfizer and Moderna.

The country’s rollout is also behind its target of immunising 40 per cent of its 1.4 billion people by June. It had suppressed the virus since the initial outbreak in Wuhan in late 2019, but its public response to domestic vaccination has lagged behind those by the US and the UK.

Local authorities have been encouraging the Chinese to get their shots by offering grocery packages while some companies have been threatened with having their operations suspended if they do not have more than 85 per cent of their workforce vaccinated.