Let’s stick together: Chloe the Beagle and Rue the bunny strike up an unlikely friendship and spend their days snuggling and going for walks

An adorable bunny called Rue and a Beagle dog named Chloe have become the best of friends, heartwarming pictures reveal.

The unlikely pair love nothing more than cuddling together at home in Seattle, Washington, going on walks and exploring.

The one-year-old rabbit and six-year-old dog first bonded due to their temperaments, said their owner Megan Cottone. They live with another rabbit and two guinea pigs. 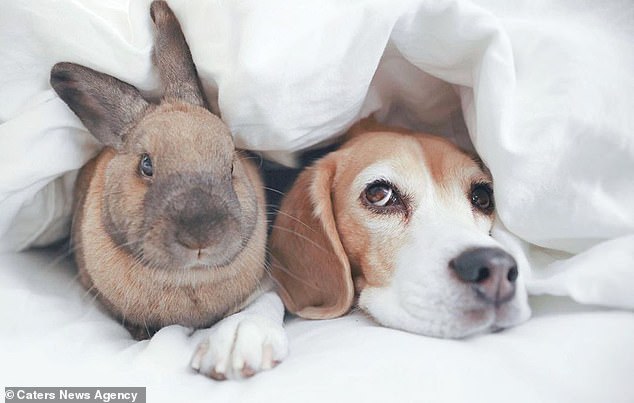 Beagle dog Chloe, 6, and bunny Rue, 1, are the best of friends. They live together in Seattle, Washington, with another rabbit and two guinea pigs. 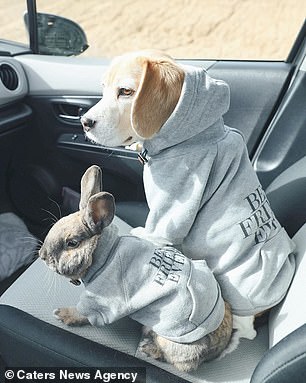 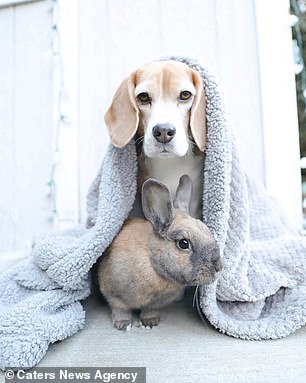 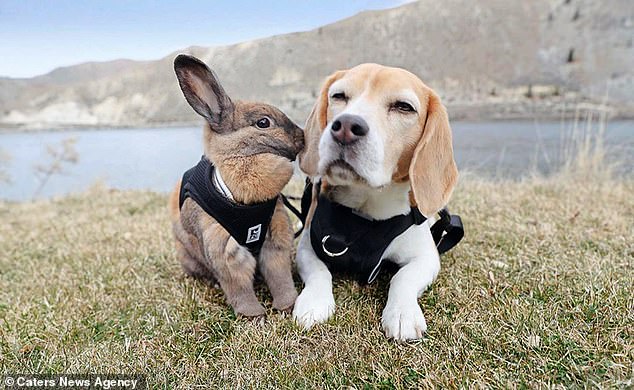 Owner Megan Cottone said they bonded due to their distinct temperaments. She captioned this image with: ‘You’re supposed to be social distancing, not kissing’ 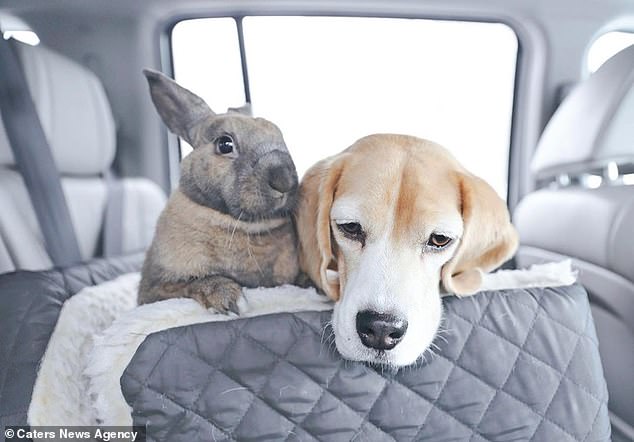 Touching photos show the pair cuddling under the duvet, wearing matching jackets on a day out and sitting in a carrier box in the back of a car.

The two are also seen wearing harnesses together on a cliff near their homes and hopping around as they enjoy Rue’s first encounter with snow.

Chloe is also seen dozing off in a bed next to fluffy Rue.

Ms Cottone said the pair share a special bond due to their characters, with Rue being very trusting and outgoing for a bunny while Chloe is calm and patient.

‘They love to sleep and cuddle together,’ said Ms Cottone. ‘But they also go on a lot of trips to explore the world.’ 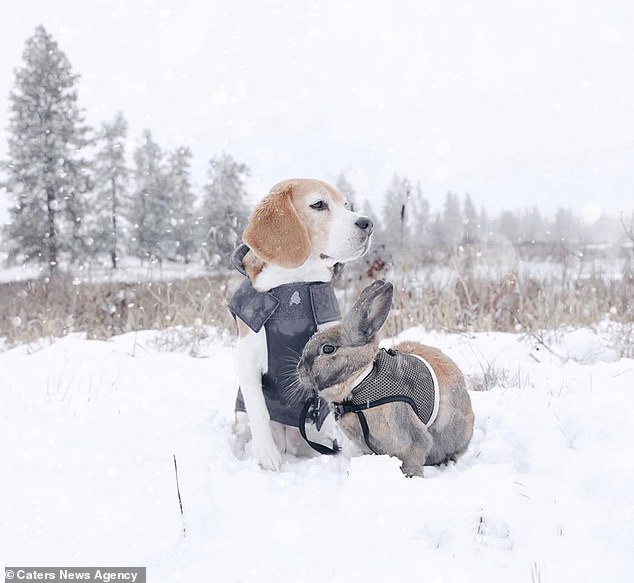 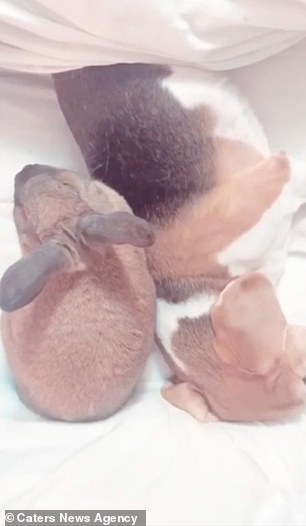 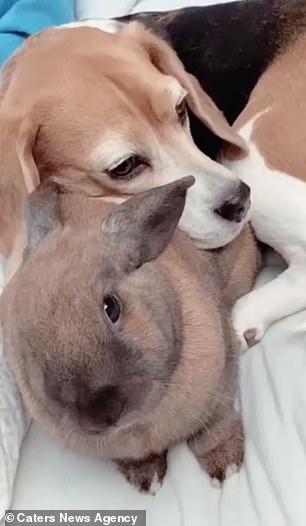 They are pictured above cuddling. The other pets they share a house with barely get a look in on their extra special friendship 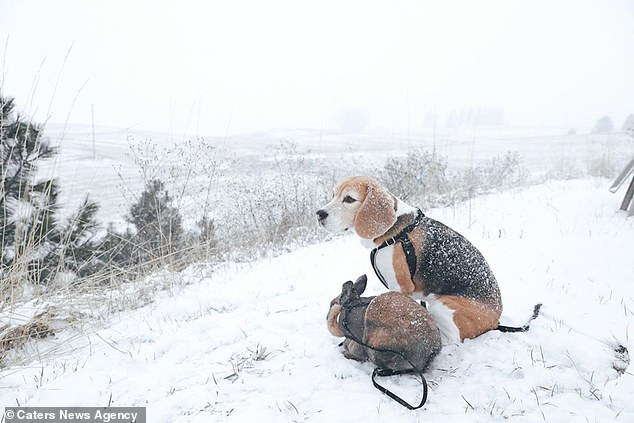 The pair enjoy snow showers on a hill near their home in Seattle, Washington

She has also spoken about how Chloe once defended Rue from a pack of snarling dogs that came running into their garden.

‘Last night we were sitting out on the deck with these two watching the sunset when two dogs ran into our yard and were running directly towards Chloe&Rue,’ said Ms Cottone.

‘Chloe is generally very friendly with other dogs but she immediately ran right at them and put them in their place getting in a little scuffle.

‘I got Rue inside right away and Gray ran toward Chloe and the other dogs owners (who were very nice and apologetic).

‘I’ve never seen Chloe act that way before towards another dog and it just makes me think she detected danger right away and was protecting her bunny.’ 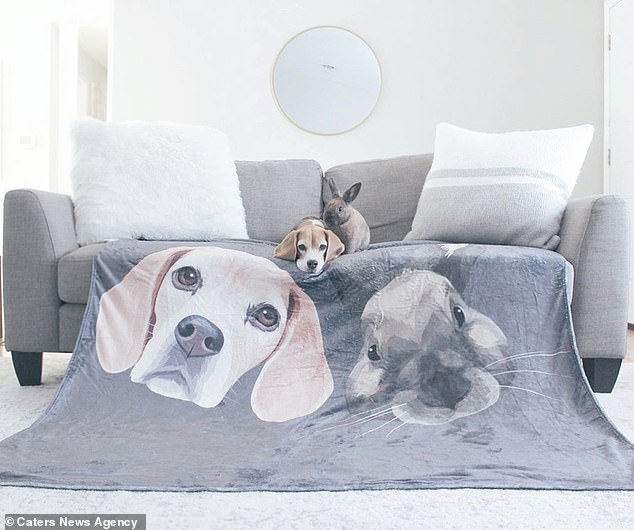 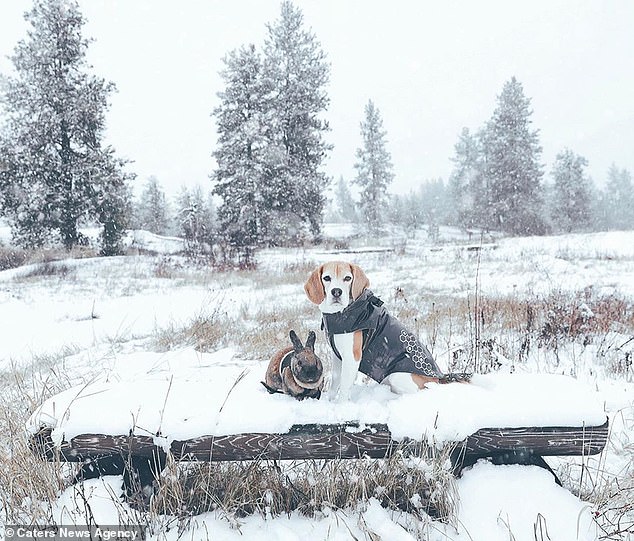 The two enjoying a winter wonderland photographed earlier this year

Ms Cottone said she also owns another rabbit and two guinea pigs, although they are not part of the special relationship between ‘TheBeagleAndTheBun’.

‘You two are supposed to be distancing, not kissing,’ she captioned one photo of the pair together on a hill.