Row erupts as UK’s religious leaders says churches should be allowed to open BEFORE pubs, beauty salons and cinemas – and restrictions on them are ‘unlawful and unnecessary’

Prominent UK church leaders today branded the mass closure of churches ‘unlawful and unnecessary’ as they threatened a judicial review into keeping them shut.

A coalition of Christian bishops and reverends has urged the Government to prioritise churches in its exit strategy from the coronavirus lockdown.

They said it was unfair for churches to be in the ‘bottom category of the most dangerous and least important services’ with beauty salons, pubs and cinemas.

The letter signed by 25 prominent church leaders – but not endorsed by the Church of England – is a pre-action legal warning against Health Secretary Matt Hancock.

However social media users have warned churches would be ‘risking the lives of congregations’ and some Christians said they are not ready to go back just yet.

And the National Secular Society told MailOnline today that religious activities should not be ‘privileged or prioritised over and above those of a secular nature’.

It comes after France’s Supreme Court last week ruled that the country’s ban on religious gatherings was illegal and ordered its government to relax restrictions. 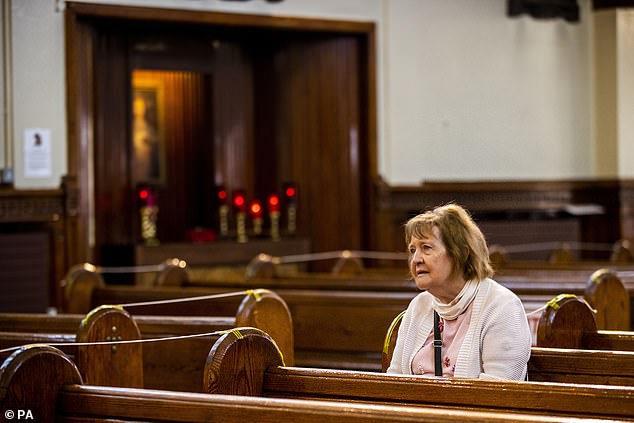 A woman sits inside Belfast’s oldest Catholic Church, St Mary’s in Chapel Lane, on Monday. Churches in Northern Ireland are now open for private prayer but all others in the UK are shut 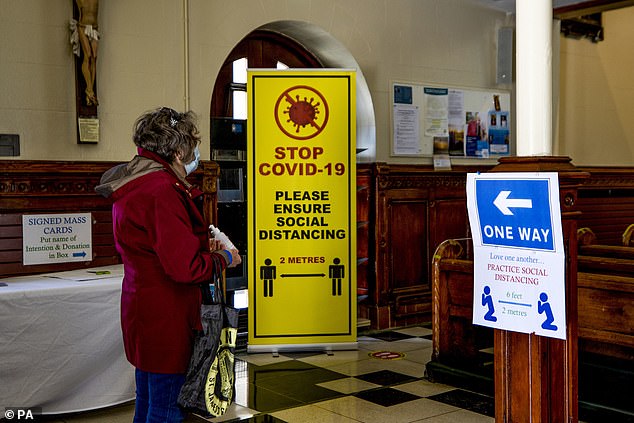 All places of worship in Britain have been closed since mass gatherings were banned by the Government on March 16 – and they are not expected to reopen before July 4.

But churches in Northern Ireland have now reopened for private prayer – albeit with strict social distancing rules and hand sanitiser dispensers in place.

The UK church leaders warn the closure of churches is an ‘extreme interference’ with human rights by contravening freedom of thought, belief and religion.

The letter adds that the regulations are ‘disproportionate in the circumstances where the overwhelming majority of churches had closed down voluntarily’.

The leaders say they want a constructive dialogue with the Government but will seek a judicial review of the ban if Ministers fail to address their concerns. 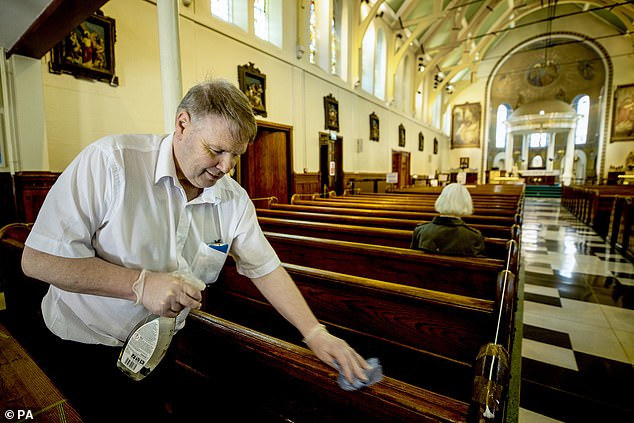 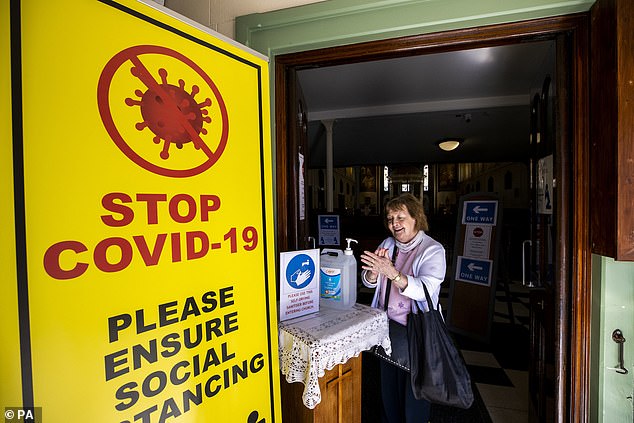 Among the signatories is Matthew Ashimolowo, leader of UK megachurch Kingsway International Christian Centre in East London, which has a congregation of 12,000.

Which church leaders have signed the letter?

The letter to the Government has been signed by 25 prominent church leaders, including the following:

Another is David Hathaway, a well-known evangelist in Britain, who said: ‘The Government has failed to recognise the centrality of faith to a Christian’s life.

‘Sunday worship and access to church buildings has been treated like a mere hobby or pastime rather than foundational to national and Christian life.’

A third, Ade Omooba, co-chair of the National Church Leaders Forum, said: ‘It cannot be right that at present it is lawful to go to a bike shop, B&Q, visit a chiropractor or dry cleaner, and not be allowed to receive Holy Communion or engage in silent prayer in a church.

‘Churches have traditionally been at the centre of the communities, able to offer counsel, prayer and comfort at times of national crisis.

‘They are at the heart of our communities helping to combat mental health problems, addictions, risk of suicide, domestic violence, poverty and risk.

‘Churches deliver an essential service to the community. The Government should not be putting churches as the lowest priority services for re-opening from the lockdown.

The letter, backed by Christian Concern and the Christian Legal Centre, also says that churches should be free to decide on how to impose anti-pandemic measures.

However, National Secular Society chief executive Stephen Evans said: ‘Churches and other places of worship should be free to open as soon as it is safe to do so.

‘But there is no compelling reason why religious activities should be privileged or prioritised over and above those of a secular nature.’

A Government spokesman told the Daily Telegraph: ‘We understand how difficult it is for people of faith not to be able to worship.

‘That’s why we are working in partnership with faith leaders, through our task force, to develop guidance that will enable the phased and safe reopening of places of worship.

‘This work is a priority, and we will issue the guidance as soon as it’s sensible to do so, ensuring that places of worship have sufficient time to put measures in place to safely welcome worshippers back.’

It comes amid suggestions churches in Britain could reopen but without singing to help reduce the transmission of the virus, as has been seen in Germany this month.

Lothar Wieler, the head of the Robert Koch Institute in Germany, has strongly advised against congregational singing amid fears over the spread of the virus.

He said during a press conference on April 28 that ‘evidence shows that during singing, the virus drops appear to fly particularly far.’

Scientists also believe people can absorb many more particles of a virus while singing because they tend to be breathing more deeply into their diaphragms. 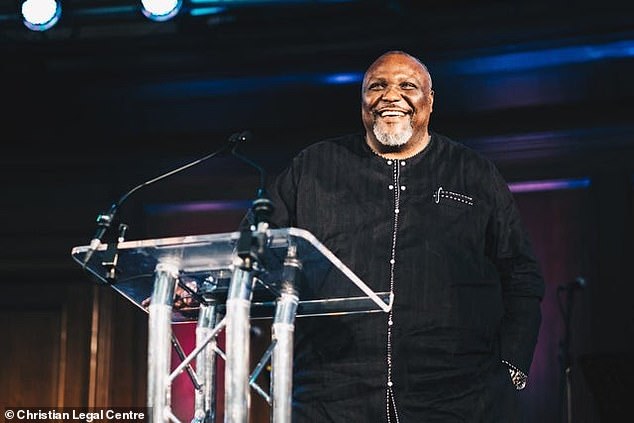 Ade Omooba, co-chair of the National Church Leaders Forum, is one of the signatories of the letter and said churches are ‘at the heart of our communities’ in Britain 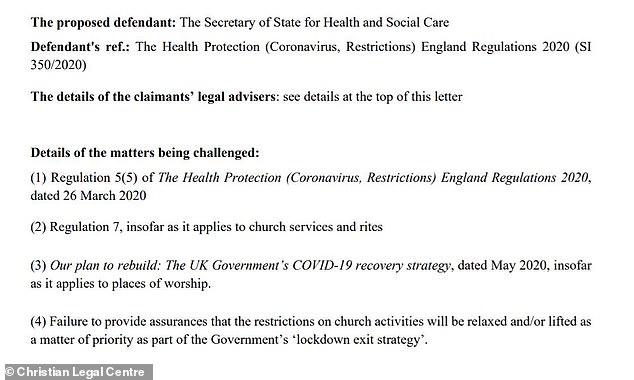 But Elle Limebear, a worship leader and youth pastor in Brighton, told Premier Christian Radio that the idea of a service without singing was a ‘sad thought’.

The 23-year-old added: ‘I love the sound of people singing together – worship is so beautiful. But I guess you just have to go with what they’re saying, don’t you?

‘You don’t want to break the rules. But I think that will make it even more beautiful when the time comes where we can sing all together and be side-be-side.’

It follows a poll revealing a quarter of Britain’s adults have watched or listened to a religious service since the lockdown began – and one in 20 have started praying.

The Church of England has seen huge numbers of people tuning into online or broadcast services, with 6,000 people calling a prayer hotline in its first 48 hours. 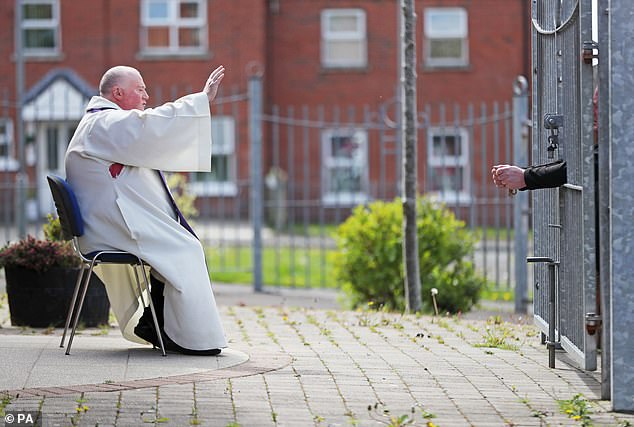 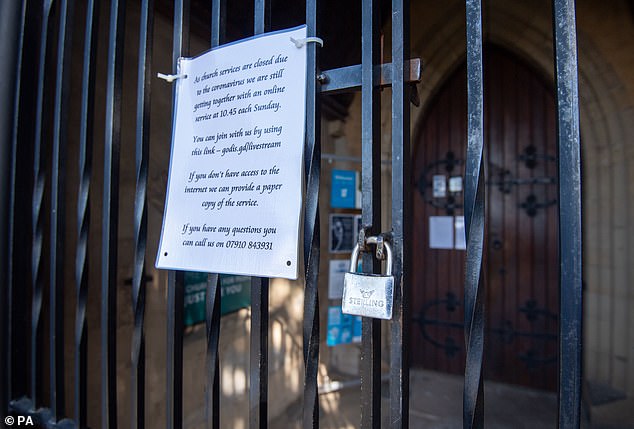 A padlock on the gates of St Lukes Church in Thurnby, Leicester, on March 22 after public services were put on hold in response to Government advice to avoid mass gatherings

Other faiths have also reported surges in people engaging with online religious activities as places of worship have been closed during the lockdown.

Ministers are considering changes to the law to allow witnesses to dial-in remotely rather than attend wedding ceremonies physically post-lockdown.

This could allow small weddings to go ahead and vulnerable guests and others who cannot attend a ceremony to watch happy couples get married.

The move would also be a boon to anyone who has relatives abroad who cannot fly to Britain for the wedding, according to The Daily Telegraph.

It comes after Justice Secretary Robert Buckland said he was giving ‘anxious consideration’ to marriages, which have not taken place since March 23.

Currently all weddings legally require two witnesses – the couple and wedding official to be present for the marriage to occur.

Usually witnesses who observe the ceremony must sign the marriage register but under the plans an electronic signature could be acceptable.

Senior Church of England figures are aware of the plans and there are discussions going on about how to bring the tech into Britain’s churches.

Although the government gave hints that small weddings could be possible in the near future, bigger ceremonies could be a long way off.

The survey of more than 2,000 people commissioned by Tearfund found a third of young adults aged between 18 and 34 had watched or listened to a service.

This was compared to only one in five adults over the age of 55. About 20 per cent of those tuning into services in recent weeks say they have never gone to church.

Earlier this month, it was claimed Catholic churches should reopen before Pentecostal churches or mosques because worshippers tend to pray more as individuals.

Cardinal Vincent Nichols, the leader of the Catholic church in England and Wales, said Catholic churches should be allowed to open first for private prayer.

He said on May 14: ‘A personal, individual prayer in a Catholic church is not something that is much done in Pentecostal churches which tend to concentrate on big gatherings.

‘It’s not what’s done in mosques, where people pray side by side. So we need a bit of differentiated thinking.’

There have even been suggestions that churches may be allowed to organise drive-in services to restart the spiritual life of the UK within social distancing rules.

Drive-through services were pioneered in the US in the 1950s and drive-through confession has been put on by priests in Poland and France during the epidemic.

Some Catholic priests in England tried to follow suit but were banned from doing so by Cardinal Nichols.

One priest who stopped from organising drive-thru confessions was Father Eugene Lynch, priest of the Church of Our Lady of the Visitation in Greenford, West London.

He said last month: ‘The idea was that people, if they wanted to come in their car, or walking, at a safe distance could go to confession.

‘We couldn’t guarantee their safety in church because you can’t sanitise everything all of the time. I thought it would be okay in a car park but we were told we couldn’t.’