Victoria’s highly touted new digitised contact-tracing system has been hindered by defects since it went live in January, with flaws so serious that tracers stopped calling close contacts during a crucial period just days before the state went into lockdown last month.

A Health Department source told The Sunday Age contact tracing calls to close contacts had to be paused for hours on February 8 after it was discovered tracers had been given the wrong list and were calling people linked to a cluster at a Thai restaurant in Black Rock in January, rather than those potentially exposed to coronavirus cases in active outbreaks. 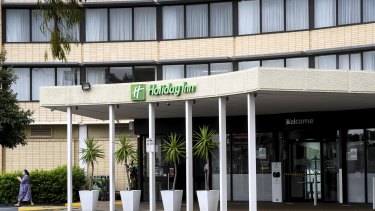 An outbreak at the Holiday Inn prompted a five-day lockdown last month.Credit:Penny Stephens

The administrative blunder saw tracers quickly slip way below their targets on February 9. About 44 per cent of close contacts linked to the Grand Hyatt and Holiday Inn clusters not were contacted within the national standard 48 hours.

Three days later, Victorians were forced into a five-day lockdown to thwart the outbreak that spread through the quarantine hotel near Melbourne Airport. At the time, Premier Daniel Andrews cited a concern that the infectious UK variant was transmitting too quickly for contact tracers to handle.

“There was another lockdown and there just didn’t need to be because it was purely about the competence of the new system,” said the source, who spoke to The Sunday Age on the condition of anonymity because they were not permitted to speak publicly due to their employment.

The Sunday Age has seen internal documents verifying that calls to close contacts were stopped for a period on February 8 due to issues with the multimillion-dollar Customer Relationship Management digitised system built by US tech firm Salesforce. 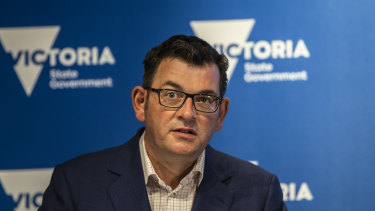 Daniel Andrews as he announced the February shutdown.Credit:Getty Images

A Health Department spokesman confirmed there had been been a problem with the system on February 8 but it did not cause a “system-wide” pause of the contact-tracing system.

The spokesman said the Salesforce system was “critical” in containing the Holiday Inn outbreak and “more than 99 per cent of known contacts of a positive case were contacted within the 48-hour benchmark during this outbreak”.

The state’s antiquated paper-based system was overrun when daily case numbers hit the 200 mark during the second wave before buckling completely when infections rose to more than 700 a day. The government announced it would develop a digital system in September.

Two department sources with direct knowledge of the digitised system detailed a series of technical problems with the software, which missed its scheduled December launch date by about a month.

One official said the system had difficulty identifying negative tests, which are required to release people from quarantine. Staff have also been unable to upload electronic lab reports into the new system at the pace required when an outbreak occurs, according to the source.

The source said difficulty entering personal and medical information into the system had led to name duplication, wrong lists being provided to tracers and hundreds of erroneous text messages sent to close contacts and COVID-positive people.

In one case, a returned traveller blamed for spreading coronavirus through the Holiday Inn quarantine hotel by using a nebuliser for his asthma, received a text message from the department on February 13, after he had already been taken to hospital due to COVID-19, saying he had tested positive to coronavirus and that he must quarantine. He had tested positive to the virus nine days earlier and had been in isolation in hotel quarantine since January 23.

The source said the digitised system deleted a key hours-long interview with an infected person in the Black Rock outbreak, but the department spokesman said there was “no indication” this had occurred.

There have also been problems with the new program using US date formats, which list the month before the day, the source said.

Deakin University Chair in Epidemiology Professor Catherine Bennett said it was not unusual for there to be glitches with the rollout of a new program, but if the new system was not up to the job, it should be scrapped.

“Pausing calls for a few hours really could be the difference between an infectious person being out and about and there being a whole extra band of potentially hundreds more people having to go into quarantine,” she said. “We have to be able to get this right.”

She wants the new contact-tracing system to be put to the test under “mock” outbreak scenarios to ensure it is effective.

“Particularly, with the new variants they are going to be tested under high pressure situations. They’ve been under pressure with the 3500 people they’ve asked to quarantine … but that’s still not a lot. If that was enough to identify these breaks in the system then serious work needs to be done to make sure that they can cope with that and more.”

But she stressed the government’s handling of the recent hotel quarantine outbreak was still a success story.

The Health Department’s newly appointed secretary, Euan Wallace, told a parliamentary inquiry in November last year that Victoria’s new digitised contact-tracing system could process up to 500 new coronavirus cases a day if the state was hit with a third wave.

The department source said many errors were due to communication breakdowns between data and intelligence teams and staff not being trained properly on how to enter data. “If there was a third wave, I wouldn’t be confident with the system being used to deal with it tomorrow,” the source said.

Technical errors within Victoria’s contact tracing system in December saw hundreds of people who travelled from Sydney to Victoria mistakenly told by Victoria’s Department of Health and Human Services via text message that they were close contacts of a confirmed coronavirus case and must be quarantined.

Opposition health spokeswoman Georgie Crozier said she had been told there was a reluctance within the Health Department to bring in Salesforce software developers who were based interstate to fix faults in the Victorian system.

She said she had received a large volume of correspondence during the Holiday Inn outbreak from people who had received incorrect or outdated information from contact tracers.

He said IT systems were notoriously difficult to roll out perfectly, and the digitised model was “inherently good, notwithstanding its hiccups”.

The department spokesman said the mix-up of outbreak contact lists was between the Grand Hyatt and Holiday Inn outbreaks, but internal department documentation seen by the The Sunday Age states contact tracers were calling people linked to the earlier Black Rock cluster.

The department spokesman said there were systems in place to deal with name duplication.

“There is no ‘inability’ to identify negative tests and it is normal for a citizen’s name to appear more than once – for example, where multiple test results are received or where a person is recorded in more than one exposure site. The [system[ has de-duplication processes in place to identify and resolve this.”