London: Trade Minister Dan Tehan says the benefits of his trip to Europe outweigh the personal “cost” of quarantine for two weeks in Canberra, but denies he is getting special treatment while thousands of Australians are stuck in coronavirus-ravaged countries.

Tehan wrapped up his week-long overseas mission on Friday by announcing consensus had been reached on the “vast majority” of issues standing in the way of a free trade agreement between Australia and Britain. 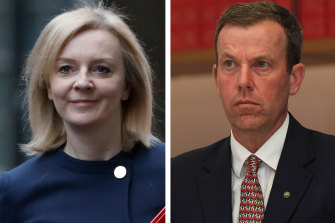 He refused to say which topics were still problematic but said an in-principle deal would be signed in June.

The Sydney Morning Herald and The Age reported on Wednesday that Prime Minister Scott Morrison and his British counterpart Boris Johnson would ink the deal that month during the G7 summit of world leaders in Cornwall.

Tehan will meet virtually with International Trade Secretary Liz Truss each Friday for the next five weeks to resolve the outstanding issues.

He had earlier in the week met senior officials in Brussels and Geneva to discuss vaccine supply.

While Tehan was told that the European Commission would not stand in the way of sending one million AstraZeneca doses to PNG instead of Australia as first intended, he did not have any joy in clearing the way for 2.2 million other doses the Morrison government wants from factories in Europe.

The Trade Minister flew to and around Europe on a Royal Australian Air Force jet and was also given a COVID-19 vaccine for protection before leaving.

“The cost is I’ve got to do two weeks’ quarantine, I understand that, but it’s so important that I can meet face-to-face with my counterparts to get the outcomes we need as a nation.

“If I have to do two weeks in quarantine, I can tell you I’ll happily do it.”

Tehan was evasive on where he would do quarantine. He said he would quarantine in Canberra but not from his home in Victoria.

Asked whether it would be in an approved hotel, Tehan said: “I’m not going to go into details around that.”

No federal minister who has travelled abroad during the pandemic has been subjected to the same hotel quarantine treatment as the public.

Foreign Minister Marise Payne and the then defence minister Linda Reynolds did not quarantine in a hotel after returning from a trip to the US in August.

Morrison self-isolated at The Lodge in Canberra last November following a trip to Japan.

“I’m not getting special treatment,” Tehan said. “I’m going home to two weeks of quarantine and it’s been incredibly important that I’ve come here for the future of our nation.”

National cabinet on Thursday slashed flights for returning Australians from India by 30 per cent amid a major outbreak there. The cut will affect thousands of Australian citizens desperate to escape the worsening health crisis.

There are also thousands of Australians still stuck in the UK despite a mammoth effort from the High Commission in London which already guaranteed passage for thousands of others.

Asked what his message was to those people waiting, Tehan on Thursday said: “At every port of call I’ve met with the embassy staff, including the consular officials, and we’ve discussed the difficult issue of trying to get as many Australians who want to go home, home.

“The government is doing all it can to help and support that effort and will continue to do so.”