Despite her strength, the Queen is not invulnerable

London: Its trooperish tone, stressing that the Queen “expects to continue light duties” despite testing positive for COVID-19, tells you everything you need to know about the ever-stalwart monarch.

Even at the age of 95, struck down with a virus that poses the most serious threat to those of her generation, the great-grandmother intends to continue to embody the “keep calm and carry on” spirit that has long been her trademark.

Yet despite her admirable stoicism, the Queen – like anyone of her advancing years – is not invulnerable. 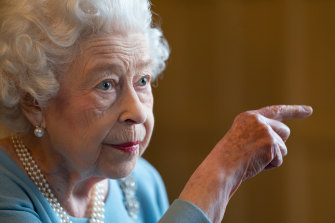 The Queen on the eve of Ascension Day, February 5 this year. Credit:Getty

We learned that for arguably the first time in her seven-decade reign when she pulled out of the Service of Remembrance at the Cenotaph last November after spraining her back.

Then on Wednesday, she reminded us that, despite her mental fortitude, she is not as mobile as she used to be, telling two military visitors to Windsor Castle: “As you can see, I can’t move.”

Despite her obvious discomfort as she leaned on the walking stick that first appeared at a royal engagement last October, she carried on with duties on Thursday, smiling as she received the Finnish and Jordanian ambassadors via video link. 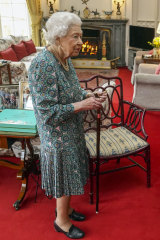 “As you can see, I can’t move”: The Queen now uses a walking stick. Credit:POOL PA

Like the Duke of Edinburgh before he retired at the age of 96 in 2017, the Queen has never been one to rest on her laurels.

As courtiers are always at pains to point out, bar Christmas Day she never has a day off from her “red boxes”. Within hours of testing positive, she even managed to send her “warmest congratulations” to Team GB’s curling teams following their successes at the Beijing Winter Olympics.

Yet while Buckingham Palace’s attempt to play down the sovereign’s “mild, cold-like symptoms” have undoubtedly come from the top, it would be wrong to gloss over her recent health problems, not least in the light of everything that has happened in recent weeks and months.

As well as having to come to terms with the death of her beloved husband last April, the Queen has had to deal with the sorry Prince Andrew saga, and more recently Prince Charles’s charity being investigated by the Metropolitan Police over the cash-for-honours scandal.

These serious issues, combined with the departure of the Prince Harry and Meghan to the US, with a row still ongoing over Prince Harry’s UK security, have contributed to making the last year another “annus horribilis” for Her Majesty.

Despite her forbearance, it would be wrong to underestimate the impact this string of unfortunate events has had on the Queen personally.

Moreover, while she benefits from the best medical attention money can buy, people are right to worry that she is continuing to do too much as her 96th birthday approaches in April. While she may not want it any other way, events to mark the Platinum Jubilee this summer are going to demand a lot of the Queen.

As well as attending a major equestrian event in May, she is then going to be front and centre of a four-day bank holiday weekend of festivities including a scaled-up Trooping the Colour, a service of thanksgiving at St Paul’s Cathedral, an appearance at the Epsom Derby, a party at the palace, a “big lunch” and a Platinum Jubilee pageant.

It would be a formidable agenda for anyone approaching retirement age – let alone someone who has worked for 30 years beyond their state pension entitlement.

As such, the palace would arguably be wise to focus on quality over quantity when it comes to the Queen’s forthcoming engagements. Since she will largely spend the summer on the world stage, does she really need to be troubled with less high-profile duties in the meantime?

Despite having been less “visible” in walkabout terms since the onset of the COVID pandemic in March 2020, the Queen’s popularity as the nation’s favourite royal has grown.

Almost half (45 per cent) of people who took part in a recent Ipsos survey named her as one of their most liked royals, a rise of five percentage points since March last year. This is surely a result of her making well-timed interventions such as the “We’ll Meet Again” speech, rather than needing to be as “omnipresent” as she used to be.

Yes, the Queen needs to be seen to be believed. But when it comes to preserving the magic of our remarkable monarch, less is most certainly more.