The chief executive of a disability service provider that tried to evict a client says the action was taken because the client’s sister – who made several complaints – risked damaging the organisation’s reputation, the disability royal commission has heard.

Sunnyfield Disability Services chief executive Caroline Cuddihy fronted the Royal Commission into Violence, Abuse, Neglect and Exploitation of People with Disability in Sydney on Wednesday after two days of testimony from family members of Sunnyfield clients. 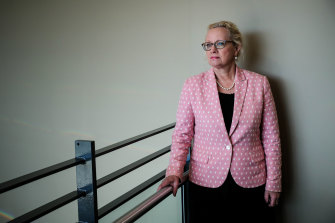 Ms Cuddihy was responding to claims aired on Monday that Sunnyfield sought to terminate its contract to care for Melissa*, a disabled resident at a western Sydney home, after her older sister and guardian Eliza* lodged several complaints with Sunnyfield and state and federal authorities.

The commission heard on Monday that Melissa has autism, post-traumatic stress disorder and Prader-Willi syndrome which causes her to be constantly hungry. She is incontinent, her home requires a locked kitchen, and some of her behaviours include banging her head and hitting herself.

Eliza argued that Melissa’s complex needs required individualised care from highly trained professional caregivers, but Sunnyfield was unwilling to deviate from the default level of care it provided in its contract, the commission heard.

The relationship broke down after Eliza made several complaints to Sunnyfield, the NSW Ombudsman, and the National Disability Insurance Scheme’s Quality and Safeguards Commission.

The commission heard how a board report marked “confidential” described Melissa as a “reputational risk”.

“I think it relates specifically to her guardian [Eliza], not [Melissa],” Ms Cuddihy said.

Senior counsel assisting the royal commission, Kate Eastman, SC, asked whether the “management of Melissa as a risk was to exit her from the service”.

Sunnyfield’s counsel objected to the question and Ms Cuddihy said the document did not intend to frame Melissa as the problem.

“You’re saying that with respect to Melissa that that shouldn’t really be Melissa, it should be Eliza and she’s the risk. Is that right?” Ms Eastman asked.

In a letter to Eliza in June 2018, Sunnyfield said its decision to terminate its contract to care for Melissa, which would have rendered her homeless, “does not need to be mutually agreed and nor does Sunnyfield need to provide any reasons for exercising its option to terminate the agreements”.

“This approach is consistent with the underlying ethos of the [National Disability Insurance Scheme], where flexibility of choice and control is conferred on both the participant and the provider.”

Under sustained questioning, Ms Cuddihy conceded this wording was wrong.

“Choice and control, under the NDIS, specifically relates to the person with a disability [not the provider],” she said.

But when Ms Eastman asked if anyone at Sunnyfield had ever told Eliza that the letter was wrong, Ms Cuddihy said: “I don’t believe anyone has.”

“Why not?” Ms Eastman asked.

“I don’t know the answer to that,” Ms Cuddihy replied.

Melissa still lives at the home.

The commission heard Sunnyfield does not have any board members with an intellectual disability, and only one has ever worked in disability services.

Commission chairman Ronald Sackville, QC, noted the majority of board members are businesspeople, which gives the impression of a commercial organisation.

Ms Cuddihy rejected Ms Eastman’s question about whether Sunnyfield only sought clients “who are not going to be difficult or troublemakers” and that the organisation had a low tolerance for people making complaints that might affect Sunnyfield’s reputation.

“No, not at all,” Ms Cuddihy said. “We really do value complaints; we value feedback.

“I do apologise that our organisation hasn’t always lived in reality what we hold dear to our hearts.”

Ms Cuddihy will return to give evidence on Thursday.

*Melissa and Eliza are pseudonyms agreed by the commission to protect their privacy.

Our Morning Edition newsletter is a curated guide to the most important and interesting stories, analysis and insights. Get it delivered to your inbox.