Rome: Doctors in Lombardy, the Italian region hardest hit by the coronavirus epidemic, have criticised local officials for their handling of the crisis and said the mistakes they made should be a lesson for everyone.

A total of 17,127 people have died from the virus in Italy, the most anywhere in the world, with Lombardy accounting for 55 per cent of the tally. The region also accounts for 39 per cent of the country's 135,586 confirmed cases. 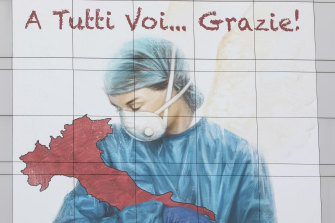 A mural on the side of a building in Lombardy thanks medical workers. Credit:Getty Images

The particularly large death toll in Lombardy, the wealthiest region in Italy, has raised eyebrows, with local officials suggesting that both the high urban density and considerable elderly population might have played a part.

However, a damning letter by senior doctors, including the heads of 11 provincial health authorities within Lombardy, said failures in the region's health system had exacerbated the greatest emergency Italy has faced since World War II.

Amongst the failings they highlighted was a lack of protective clothing for medical staff – a regular source of anger since the outbreak emerged on February 21.

The medics also bemoaned an "absence of strategies" in tackling the crisis, a lack of good data and limited testing as the virus spread. This "greatly underestimated the number of patients and, to a lesser extent, the number of dead", they wrote.

While the neighbouring region of Veneto engaged in widespread testing in a known coronavirus hotspot, Lombardy only tested the seriously ill arriving for treatment in hospital, saying they did not have the capacity for wider checks. 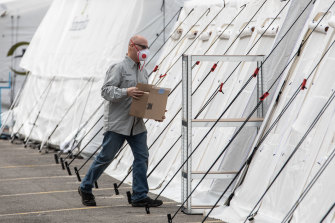 A man handles a box at a Samaritan’s Purse Emergency Field Hospital in Cremona, near Milan, Italy.Credit:Getty Images

"This determined the death of many colleagues, the illness of many of them and the probable and involuntary spread of the contagion, especially in the early stages of the epidemic," said the letter, which was posted on the website of the national federation of doctors, surgeons and orthodontists.

The federation says 94 medics have died in the outbreak, many in Lombardy, which is run by the far-right League party.

The letter took aim at the management of nursing homes, where hundreds of people have died without ever being tested. The doctors said in the province of Bergamo alone, 600 of the 6000 pensioners under care had died.

Italy's Health Ministry announced on Tuesday it was sending inspectors to Milan's largest nursing home, Pio Albergo Trivulzio, where more than 100 people have died since March.

A photograph of nine bodies in the home's mortuary was published on the front page of La Repubblica newspaper on Tuesday, with another showing its chapel full of coffins.

"We always acted for the good of everyone in an extraordinary emergency and we will not let anyone cast aspersions on the serious, rigorous work we have carried out," he said on Facebook. He did not refer to the doctors' letter.

Italy's healthcare system is decentralised with regions having control over the money that goes to hospitals within their own borders.

Lombardy has focused on developing a dual private-public network of high-performing hospitals, but critics say this was done at the expense of grassroots medical care.

"Public health and on-the-ground medicine have been neglected and weakened in our region for many years," the doctors said.

"It is going to be difficult to recover from this situation at the moment," they wrote, adding that as a starting point, the region should undertake large scale testing of health workers.