A drink driver was on the wrong side of the road and travelling at almost three times the speed limit when he crashed into an Uber, killing one of the passengers.

Toni & Guy academy head receptionist Franca Grossi, 52, was going home with friends in an Uber after an evening out when Steve Boochoon, 25, careered into her car.

The mother-of-two was killed while two others including the driver were injured in the crash on Hornsey Rise, Haringey, north London, at around 12.10am on August 13.

The car was travelling between 54 and 57mph on a 20mph road.

Boochoon was so drunk he laughed when he got out of his wrecked car, the Old Bailey heard.

Mr Fontana escaped with cuts and bruises but Ms Grossi died from her injuries the next day. 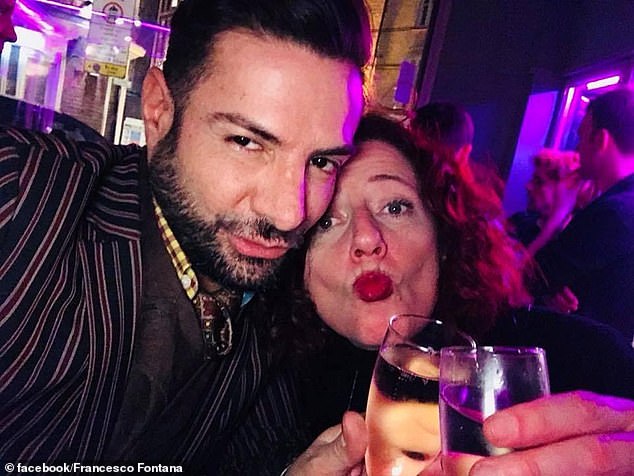 Victim Franca Grossi, 52, on the right, pictured with her friend of 20 years Francesco Fontana

‘At this time he was disqualified from driving, had no insurance and was on the wrong side of the road.

‘His speed was at least 50mph with the limit being 20mph.

‘His car collided with an Uber taxi outside the forecourt of a BP petrol station.’

Ms Grossi’s husband James Manns read an impact statement to court, placing a photo of his wife on the front of the witness box.

He said: ‘The killing of my wife and the mother of our two young daughters has devastated us.

‘We still can’t and I doubt we will come to terms with this tragedy.

‘Every day I feel sick in the pit of my stomach and I will never get over the image in my head of when I was with Franca the day she died in hospital. A piece of me also died that day. 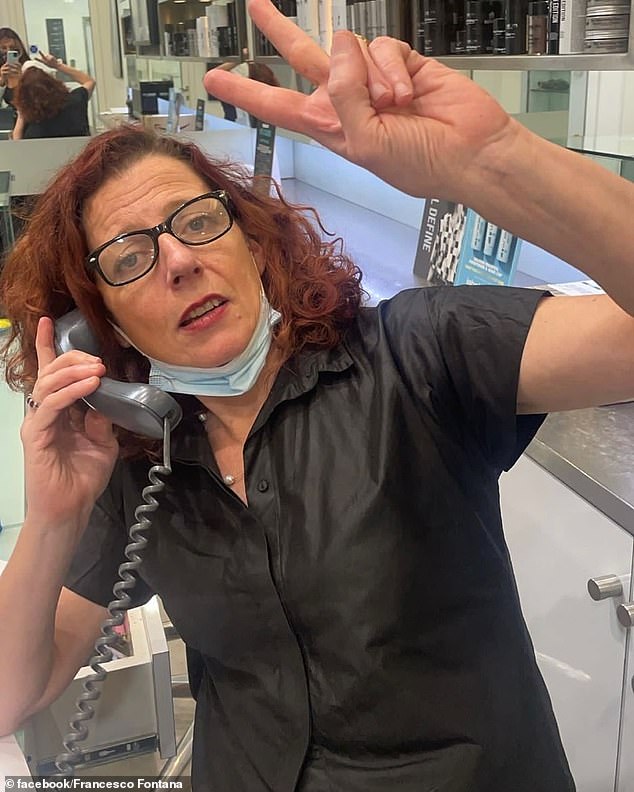 The driver escaped with cuts and bruises but Ms Grossi , pictured, died from her injuries

‘It has also devastated her mother, four sisters and nieces, having to come to terms with the fact she has so wrongfully been taken away from us so soon.

‘She was a young, kind, generous, passionate and happy woman always laughing and helping out people with such sincere honesty and love.

‘The loss of Franca and the impact of her death has brought huge financial stress to me and our two daughters with the worry of paying rent, bills and food a daily concern.

‘I’m left with anger and hatred towards Steve Boochoon which I have never felt towards anyone in my life before.

‘I will never forgive nor forget what he has done.’

Looking at Boochoon in the dock he said: ‘He has destroyed me and my life will never be the same.’

He added that his eldest daughter was too traumatised to give an impact statement.

Mr Holt said the Uber driver described seeing something flying towards him so fast he did not realise it was a car.

Following the incident, Boochoon was asked by police if he had been drinking to which he replied ‘I’ve only had two shots bro.’

Police reported there was a strong smell of alcohol on Boochoon, his eyes were bloodshot and he looked unsteady.

He was asked by a policeman if he was finding the situation funny, and he replied that he was.

Boochoon tried to blame the taxi driver for the crash.

Smashed glass bottles and drug paraphernalia including rolling papers were found in his car.

Mr Fontana told the court: ‘Dear Franca, I’ve been trying to write about my life without you for last nine weeks.

‘I didn’t want to because writing or talking about it makes it real.

‘The truth is that it is real and nothing could be done or said to change it or make it better.

‘It’s not possible to put into words the impact the dangerous driving of Steve Boochoon has had on my life.

‘Most people wake up from a nightmare but I wake up every morning to a real one. I struggle into work and I’m not the same person I was before.

‘It has been beautiful to have you in my life for 20 years.

‘From the first time we met I knew it was going to be the beginning of a beautiful friendship. Both from Italy we had not much money, not much English spoken but we were pursuing our dreams.

‘It felt amazing to have my best friend working with me. Since then you have been the first person I have seen when walking through the door and normally the last one.

‘It didn’t just break the hearts of your many friends and family but others too, people from all over the globe, customers and students here at work for 18 years.

’90 per cent of the people who come in are asking what happened to you and then we have to relive the trauma and see other people breaking down.

‘I don’t understand why dangerous people are left on our streets while you won’t be here to see your girls growing up.’

Boochoon has a previous conviction for driving whilst intoxicated which is why he was disqualified on the day of the offence.

His defence lawyer Peter Rowlands said it was not prolonged or persistent speeding and that Boochoon had shown genuine remorse.

Boochoon had good character references from staff at the restaurant where he worked.

He also previously worked at an estate agents, the court heard.

He was remanded in custody ahead of sentence tomorrow.