Eyes wide open when Trump turned his gaze on Sydney

One day in late 1986, when I was working as New York correspondent for The Sydney Morning Herald, I caught a glimpse of Sydney architect Harry Seidler on a plane going to Atlantic City.

At the time, the NSW government was seeking tenders for the building of Sydney's first (legal) casino. It had cancelled a deal with a US company called Harrah's when it learned the FBI was investigating Harrah's for alleged links with the Mafia. 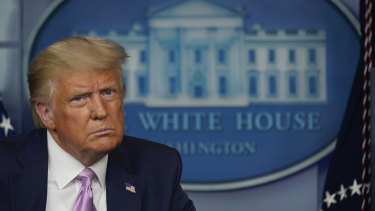 Seidler jumped into a limo before I could catch him, so I was left to speculate on why a respectable – indeed puritanical – person such as Seidler might be visiting the sleazehole that was the gambling hub of east coast America.

I guessed he was seeing one of the casino bosses who were planning bids for Sydney and I started phoning around to find out who that might be.

It didn't take long to discover Seidler's host was a 40-year-old self-described billionaire named Donald Trump. He was eager to talk to me.

Trump confirmed he was a candidate: "Hopefully we'll be considered the best qualified because of our experience and reputation. Sydney's a wonderful city and if properly done, this could be a tremendous success both for Sydney and for everybody involved.

And yes, he'd been having "a series of conversations with Harry Seidler, who is a very wonderful architect and a nice man". I reported this on the front page of the Herald.

I got a kind of reference for Mr Trump from the US architect Philip Johnson (who had designed a never-completed project called Trump Castle on Madison Avenue in 1983): "Oh, he lies a great deal, but it's sheer exuberance, exaggeration. It's never about anything important. He's straight as an arrow in his business dealings."

The last sentence of that quote became moot a few months later when the NSW government rejected Trump's application, based on this police report: "Atlantic City would be a dubious model for Sydney and in our judgment, the Trump Mafia connection should exclude the Kern/Trump consortium."

I'm confident that now I have revealed this background information, the American people will apply the same scepticism to Trump's latest sales pitch.

David Dale teaches media at the University of NSW.