Karen Lindley has been described as a paedophile victim’s whisperer – she accepts it is a good analogy. She gives victims of sexual assault the strength to stand up in court to confront their abusers.

She’s also one of a kind. “If you are in NSW you will get me, the fairy godmother. I am the only one who does what I do,” she said.

Ms Lindley has been made a member of the Order of Australia (AM) in the Queen’s Birthday honours for significant service to social welfare initiatives and to the jewellery industry. She is a gemologist and founder of an opal and diamond business in what, at the time, was a male-dominated industry. 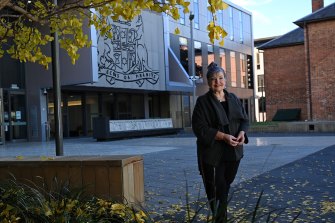 Karen Lindley outside the courts in Parramatta.Credit:Nick Moir

But it is her volunteer role taking her to the darkest corners of abuse that sets her apart and has helped put some 25 paedophiles behind bars. She doesn’t collect evidence or provide counselling but gives nurturing to victims so that they are in better shape to make a statement to police.

She has supported the victims of notorious offenders like Robert “Dolly” Dunn and his accomplices. Last year Ms Lindley emerged as the lifeline behind Jeni Haynes, the first person with multiple personality disorder given permission to use her ‘alters’ to give evidence in court. Her father, Richard Haynes, 74, was sentenced to 45 years in prison for abuse of his young daughter. “I am living my best life because of the help I received from Karen Lindley. I feel blessed to have her in my life,” Ms Haynes.

After 20 years listening to stories of abuse, does it get to her? “No, because when I’m doing it, I’m doing it and when I’m not doing it I’m playing with my grandchildren, feeding six geese and a cat or gardening,” Ms Lindley said. “I divorce myself from it otherwise you couldn’t do it for 20 years.”

She is a past board member of The Humpty Dumpty Foundation and Bravehearts and a board member of The Jewellers Association Australia. She is a formidable fundraiser for charities including breast cancer and motor neurone disease. Now semi-retired, Ms Lindley is serving on a government board in the justice sector.

On learning of the honour, she said: “They called me on April 1st and I thought it was one of my mates pulling my leg. They said they sent a letter but it was after all the heavy rain and the letter was sodden in the letter box.

“When I was told all I could think was that I was so thankful of all the wonderful people who have supported me throughout my life and taught me the things that I know so I can help others. My cleaning lady said, ‘What’s the matter, you look like a stunned mullet’.”