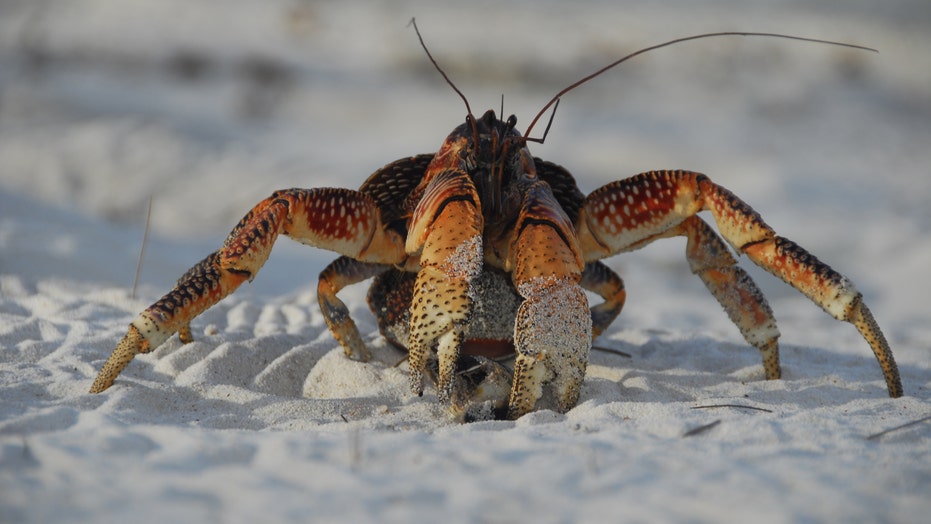 Its watching you, this ‘nightmare’ crab will haunt your dreams.

These crabby party crashers wanted to join the fun, too.

A group of Australian families was surprised by a swarm of robber crabs that recently invaded their outdoor picnic party during a camping trip.

Some local folks on Christmas Island gathered for a BBQ bash over the weekend, and were shocked when dozens of curious crustaceans invaded their fête, Christmas Island Tourism reported on Facebook.

"Robber crabs behaving badly!" the tourism group joked, teasing that the campers had "a few extra mouths to feed."

Hilarious photos of the must-see moment have since gone viral with over 1,800 shares.

Witness Amy Luetich, who has lived on the isle off Western Australia for a few years, said she had never seen quite so many robber crabs before that night in the Grants Well jungle.

“We have camped in that area a few times and we have never seen so many robber crabs,” Luetich told Daily Mail Australia. “As soon as we started cooking, they swarmed around us. My son counted 52 of them.”

“Then they started to climb up to the table, and another climbed onto the barbecue,” she alleged. “We kept our tents away from where we had eaten, but one of the families said the whole night they could feel one tapping on the outside of their tent.”

Fortunately for the happy campers, robber crabs – otherwise known as coconut crabs – are usually harmless, despite their menacing looks.

According to Parks Australia, the robber crab is the biggest land crustacean in the world; weighing up to 9 pounds and measuring 3 feet across.

“Christmas Island has the world’s largest and best protected population of these gentle giants, which can live to be more than 50 years old,” the department reports. “They are found in most parts of the island, usually sheltering during the day and venturing out at night or on overcast days.”