A multitasking father-of-three duct taped his baby’s seat to the top of his robot vacuum so he could entertain his daughter and clean the house at the same time.

Daniel Bedenbaugh decided to keep his six-month-old daughter Lucy at home in South Carolina when she came down with a runny nose on September 22.

The 30-year-old father was working in sales from home and had to juggle his job with entertaining his youngest daughter and cleaning the house.

But Mr Bedenbaugh had a genius idea when he noticed that their Roomba vacuum was around the same size as the base of Lucy’s seat.

The inventive father found a couple of feet of silver duct tape in his garage and went about wrapping it around the base of the seat and underneath the mechanical floor cleaner.

Hilarious video footage shows Lucy riding around on top of the DIY robot chair while her cheerful father sings Roger Miller’s ‘King of the Road’ to her.

Daniel Bedenbaugh, 30, duct taped his daughter Lucy’s chair to a Roomba vacuum to do the cleaning while entertaining his six-month-old girl, a video from September 22 shows 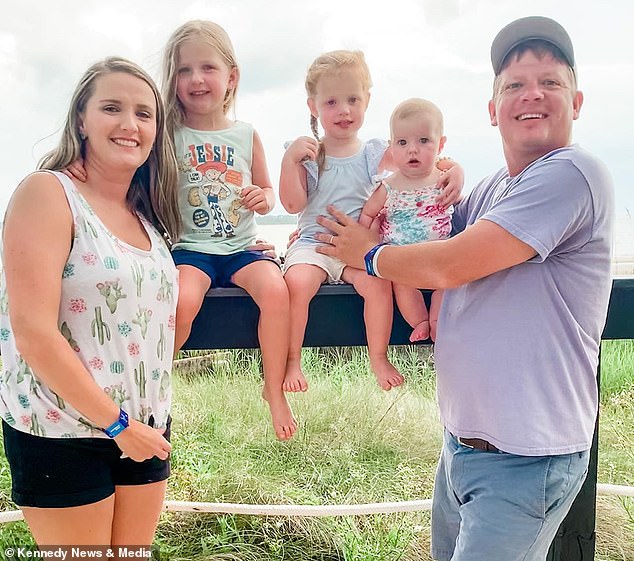 The father (right), who also shares four-year-old Charlie (centre left) and Jojo (centre), three, with his wife Cara (left), came up with the hack while working from home in South Carolina

The little girl spins around in small circles while the Roomba vacuum is set up to clean the floors of the family home, the video shows.

When his youngest was securely fastened into her DIY chair, Mr Bedenbaugh sent the adorable footage to his 30-year-old wife and schoolteacher Cara.

Mrs Bedenbaugh vowed never to leave the pair alone together again, until she spotted the tape and realised that her husband had ‘attempted to make it safe’.

After her initial fears, the mother shared the video to social media where friends branded the idea ‘genius’ while others said it’s something their own husband would do.

Daniel said: ‘Cara told me she thought to herself “I shouldn’t leave those two alone together” until she noticed the tape and decided I was at least attempting to make it safe.

‘I was attempting to clean the house while entertaining Lucy, while working, when I realised the base of her seat was about the size of the top of the Roomba.

‘In about five minutes, with a couple feet of duct tape, I had the seat secured to the hoover for a trial run.

‘She rode around the room for about 15 minutes and was a little apprehensive at first because the Roomba only has one speed which is a little bit faster than ideal for baby transportation. 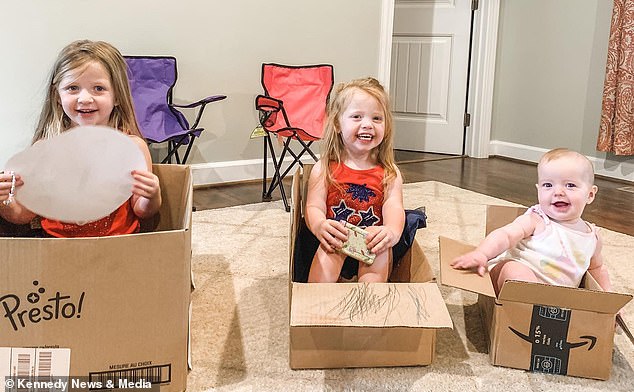 Mrs Bedenbaugh shared her husband’s unusual childcare technique on Facebook where friends branded it as ‘genius’. Above, Lucy (right) with her sisters Charlie and Jojo (centre) 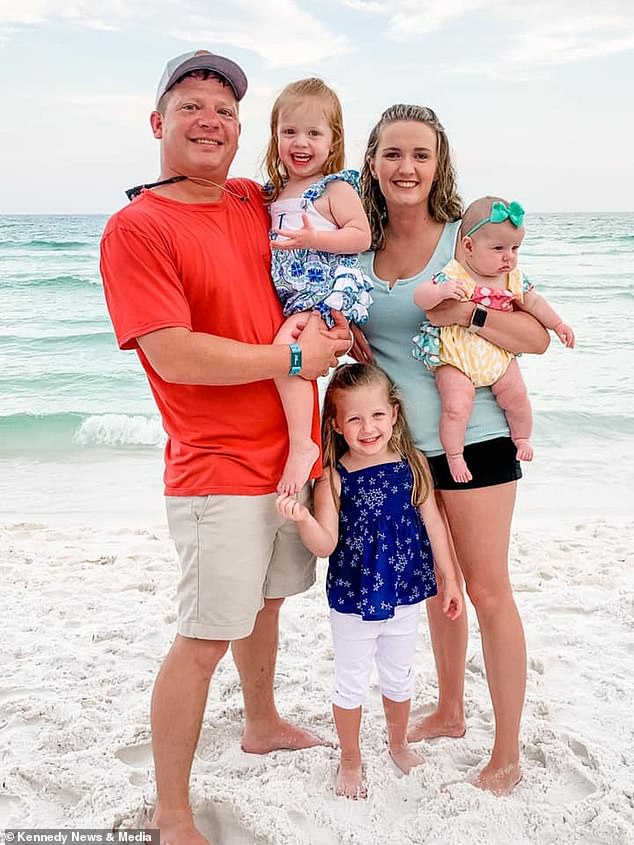 Mrs Bedenbaugh, 30, (right) vowed not to leave her husband alone with Lucy after watching the footage – before spotting the tape and realising he had ‘attempted to make it safe’

‘But it didn’t take long for her to embrace the experience and she fully enjoyed her new ride.

‘When I showed my boss, he told me I have too much time on my hands. A few friends have joked I should patent the idea.’

Other friends who watched the video said the hack was so good that they suggested the father should patent the idea.

Another person commented that Mr Bedenbaugh seemed to be starting his daughter on household chores a little ‘early’ on.

One friend said: ‘Maybe he ought to patent one of those.’

Another person commented: ‘She is having a blast. Fyi…my husband would have done this too (if we had one when they were that small).’