Federal prosecutors intend to drop all charges against a New York man accused of participating in the Jan. 6 riot at the U.S. Capitol, according to reports.

Prosecutors asked a judge Tuesday to dismiss the charges against Christopher Kelly after an investigation determined he wasn’t inside the building. It appears to be the first case that prosecutors have given up on during the criminal investigation of the Capitol riot.

“The government and defense counsel have discussed the merits of the case, and upon reflection of the facts currently known to the government, the government believes that dismissal without prejudice at this time serves the interests of justice,” prosecutors wrote in a filing on Tuesday. 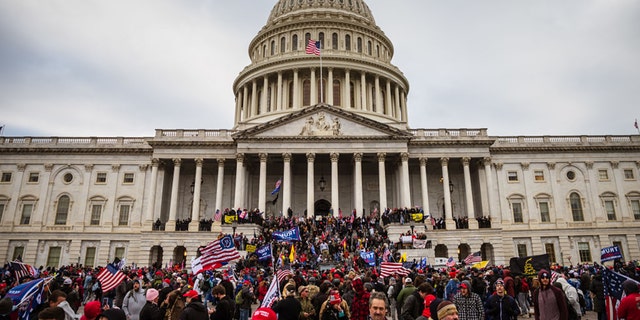 A large group of pro-Trump protesters stands on the East steps of the Capitol Building after storming its grounds on January 6, 2021, in Washington, DC.  (Photo by Jon Cherry/Getty Images)

“Since he was not inside, in the interest of consistency in the investigation, the charges were dropped,” an official told Politico.

Kelly, of New York City, was arrested on Jan. 20 after the FBI said a confidential informant directed agents to his Facebook account, which showed him posing on Capitol grounds during the unrest on Jan. 6. In an arrest affidavit, the FBI accused him of obstruction of an official proceeding, along with other offenses.

“We’re in!” Kelly wrote in one post around the time of the breach at the Capitol, according to the federal law enforcement agency. He was also accused of posting a photo from inside the Capitol, the FBI said – though he wasn’t in the picture. In another photo, Kelly appeared to be waving an American flag outside the building.

In the initial arrest affidavit, an FBI agent said, “I believe messages and image above reflect that Chris Kelly was using this account to inform associates that he had breached the Capitol building and was inside.”

But the U.S. later determined Kelly “wasn’t actually inside the building,” despite him sharing the photo that appeared to show people at the Capitol, according to Marc Raimondi, a Justice Department spokesman.

“Further investigation found out it wasn’t his photo,” Raimondi said, according to Bloomberg. “If you enter the building, you’re gonna get something. “But if you’re just there unless you did something else … we’re not charging them.”

Kelly has been on pretrial release since his first court appearance in January, according to Politico.

More than 400 people face federal court charges related to the storming of the Capitol.