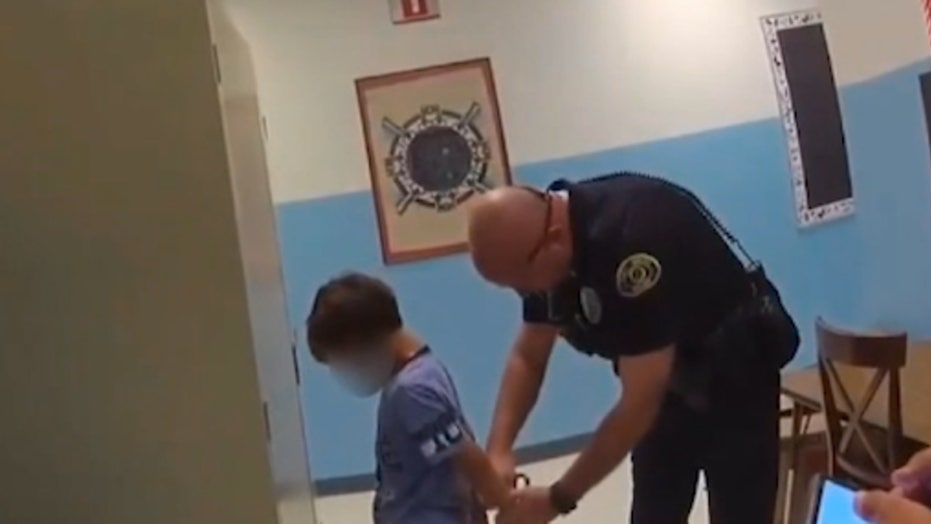 Raw video: Bodycam footage from the Key West Police Department shows officers arresting an 8-year-old boy. The child was charged with felony battery for allegedly punching teacher in the chest.

The mother of a young boy in Florida is suing the local school and police officials for allegedly using “'scared straight’ tactics” on her then-8-year-old son who has special needs – handcuffing the boy and taking him to an “adult prison” after he was accused of assaulting his teacher, according to the family’s lawyer.

Civil rights attorney Ben Crump is expected to hold a press conference Tuesday morning to discuss the 2018 case in which he said officers from the Key West Police Department arrested his client’s son – who was 8 years old, 3-foot-5 and 64 pounds at the time – and told him, “You’re going to jail.”

Police responded on Dec. 14, 2018, to Gerald Adams Elementary, where the boy allegedly punched a substitute teacher, according to Crump and an arrest report. He was reportedly charged with felony battery.

Police body camera footage of the arrest shows the officers arrive to find the shaggy-haired boy sitting down.

“You need to stand up and put your hands behind your back,” they tell him.

The officers appear to position the boy so he’s standing facing a filing cabinet with his hands against the metal in front of him. One of the officers tries to handcuff the boy, but later tells him, “Your hands are too small.”

The child cries as he stands with the officers.

The footage continues for another minute and 20 seconds as police walk the boy out of the school as people who appear to be school staff members look on.

The police report describes how the boy’s teacher was trying to correct the way he was sitting in his seat in the cafeteria. She then asked him to sit with her, but he would not. When the teacher approached to escort him to sit next to her, he initially agreed, but then told her, “My mom is going to beat your a–,” according to the report. He then allegedly used his right hand to punch her in the chest.

One of the officers who later arrived at the scene described in the police report how the child “had his hands clinched (sic) into fists and he was postured as if he was ready to fight."

Key West Police Chief Sean T. Brandenburg stood by the officers, saying in a statement to Fox News: “Based on the report, standard operating procedures were followed.” A spokesperson declined to comment regarding any pending litigation.

Crump, who also represents the family of George Floyd, called the arrest “unbelievable” and criticized the officers for thinking “it was appropriate to handcuff and transport him to an adult prison for processing,” he wrote in a tweet on Aug. 9, when he released the video.

In a press release shared on Twitter, Crump said the boy has behavioral and emotional disabilities that required an individualized educational plan with the school, which was “intended to make sure his educational experience was appropriate for him."

“Instead of honoring and fulfilling that plan, the school placed him with a substitute teacher who had no awareness or concern about his needs and who escalated the situation by using her hands to forcibly move him,” Crump said. “When he acted out, the teacher called the police, who threatened him with jail and tried to put him in handcuffs, which fell off because he was too little.”

A school official told the Miami Herald they were not aware of any involvement in litigation regarding the case, but otherwise declined to comment "due to the possibility of this matter becoming a legal issue in the future."