Former federal defence minister Brendan Nelson has described Ben Roberts-Smith as “the most respected, admired and revered” Australian soldier in more than half a century and accused the media outlets at the centre of the war veteran’s Federal Court defamation case of trying to tarnish his good reputation.

Giving reputation evidence, Dr Nelson, a former director of the Australian War Memorial, said he had become “very concerned” about Mr Roberts-Smith’s mental health in the wake of a series of articles that started in June 2018. The newspapers “seemed to be intent on bringing him down,” and the former soldier had become despondent, anxious and introspective, Dr Nelson said. 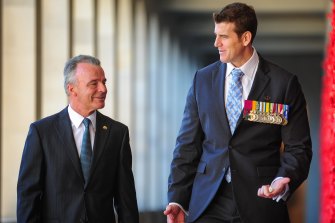 The former Liberal minister gave evidence on Monday on the 15th day of Mr Roberts-Smith’s defamation trial against The Age and The Sydney Morning Herald over articles that he says accuse him of war crimes, and an act of domestic violence against a woman with whom he had an extramarital affair. Mr Roberts-Smith, a former Special Air Service (SAS) soldier, denies all wrongdoing. The newspapers are seeking to rely chiefly on a defence of truth, but also say he is not identified in some of the articles.

An at-times emotional Dr Nelson said “I’ll try not to get angry about this” as he recounted a media conference in 2018 about an exhibition on First Nations Australians’ military service, at which there was “not one single question about Aboriginal service” but a string of questions about Mr Roberts-Smith. He was asked if he regretted his support for Mr Roberts-Smith and if the former soldier should have his Victoria Cross removed.

“It has been devastating, the impact on him,” Dr Nelson said. He added he was cautioned by a very senior public figure, “not the prime minister”, seemingly about his public association with Mr Roberts-Smith.

“After the publication of the stories, [Mr Roberts-Smith] returned less of my phone calls. I can only speculate as to why. I suspect embarrassment.”

Dr Nelson said he recognised Mr Roberts-Smith “immediately” in two stories in June 2018 referring to a soldier known only as “Leonidas”. The articles referred to a “tall, imposing, warrior-like figure”, Dr Nelson said, and it was clear to him that this was a reference to the two-metre-tall Mr Roberts-Smith.

Prior to the articles, Mr Roberts-Smith was “the most respected, admired and revered Australian soldier in more than half a century”, he said.

Dr Nelson recalled that “wherever he went, wherever it was, he was the subject of what I would describe as reverential mobs”, including people who would “fall into his arms” with their own stories of war, and senior officers who would salute him in public. 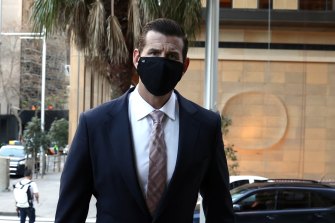 Ben Roberts-Smith arrives at the Federal Court in Sydney on Friday. Credit:Dominic Lorrimer

He said he was “certainly unaware of any such behaviour” when asked about the allegation of domestic violence, which has been vehemently denied by Mr Roberts-Smith.

Dr Gogna, who is now based in the Bahamas, was deployed to Afghanistan with Mr Roberts-Smith and the pair became friends. He also treated Mr Roberts-Smith as a military doctor and in a civilian capacity. Speaking via audiovisual link, Dr Gogna said Mr Roberts-Smith had become “more withdrawn” and apprehensive after the articles at the centre of the case were published.

“There is a large cloud hanging over him,” he said.

Dr Gogna said he had worked in “senior government arenas” in which people were aware that he knew Mr Roberts-Smith and had been asked, “is it true about him?” and “is it true about what really went on over there?” after the articles were published.

A two-week lockdown imposed in Greater Sydney following a growing cluster of COVID-19 cases linked to Bondi has resulted in the Federal Court streaming the trial online to keep observers out of the courtroom and its surrounds.

The parties and their lawyers remain in court but the restrictions, including quarantine restrictions in other states on residents re-entering the state after visiting coronavirus hotspots in Sydney, are likely to impose barriers to witnesses visiting Sydney and may lead to a temporary halt to the trial in coming days.