A HERO mum "died like a warrior" fighting off the Nice terrorist who beheaded a churchgoer, her friends and family have said.

Simone Barreto Silva, 44, managed to raise the alarm after escaping the Basilica of Notre-Dame in Nice, south of France, despite being stabbed multiple times. 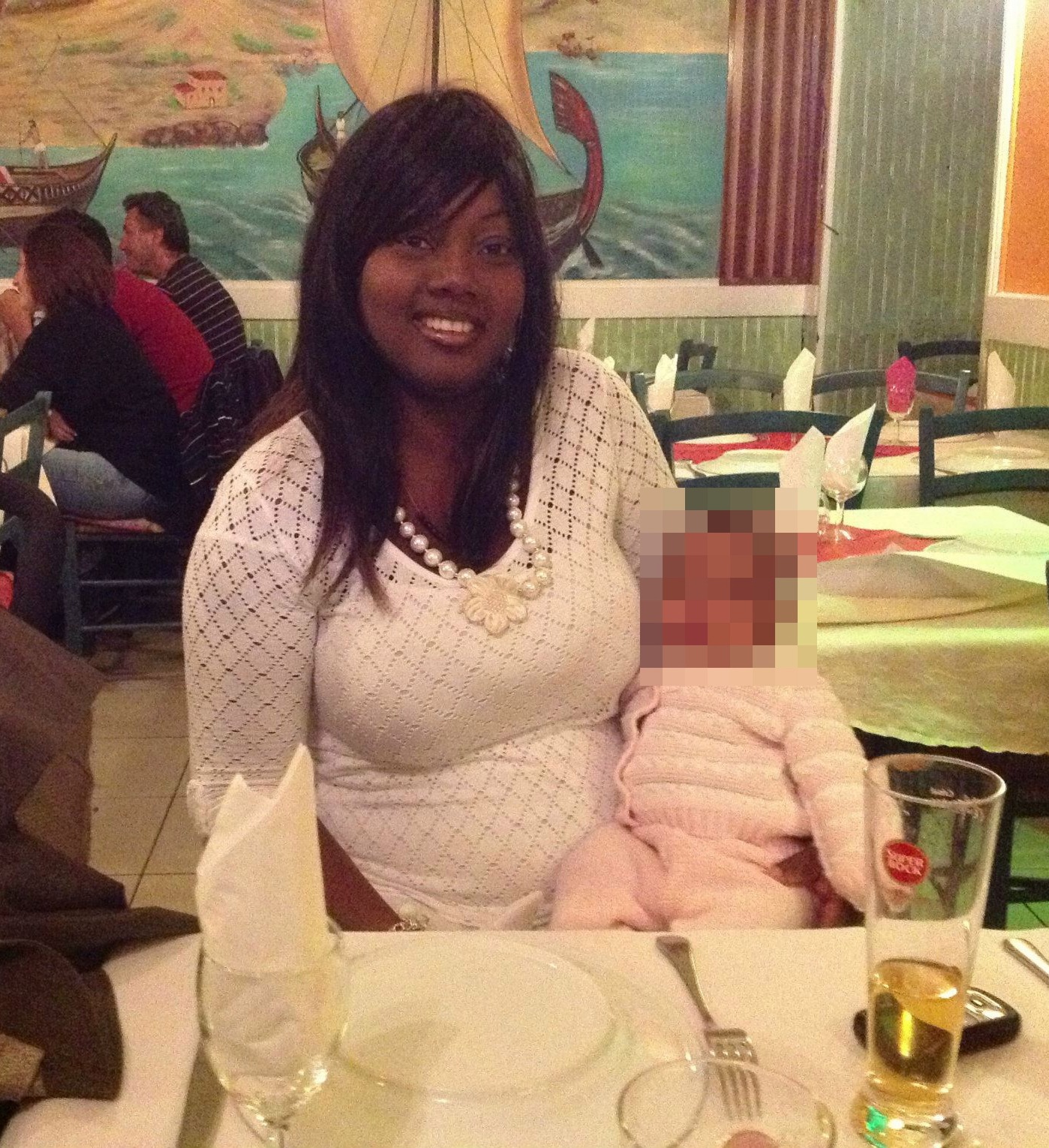 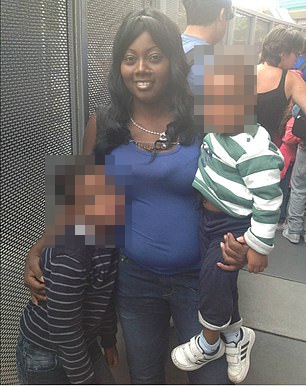 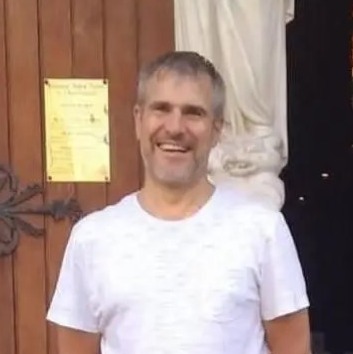 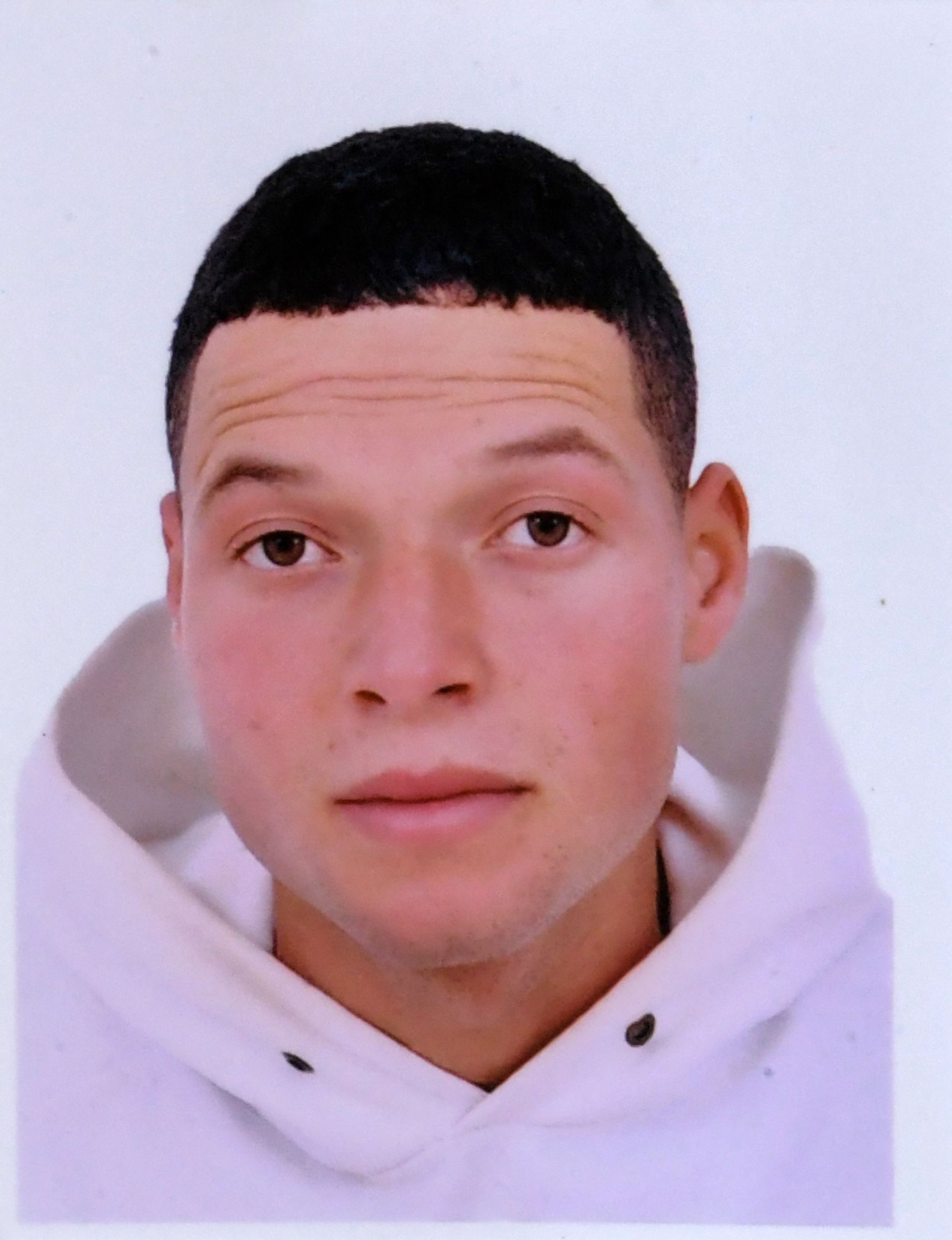 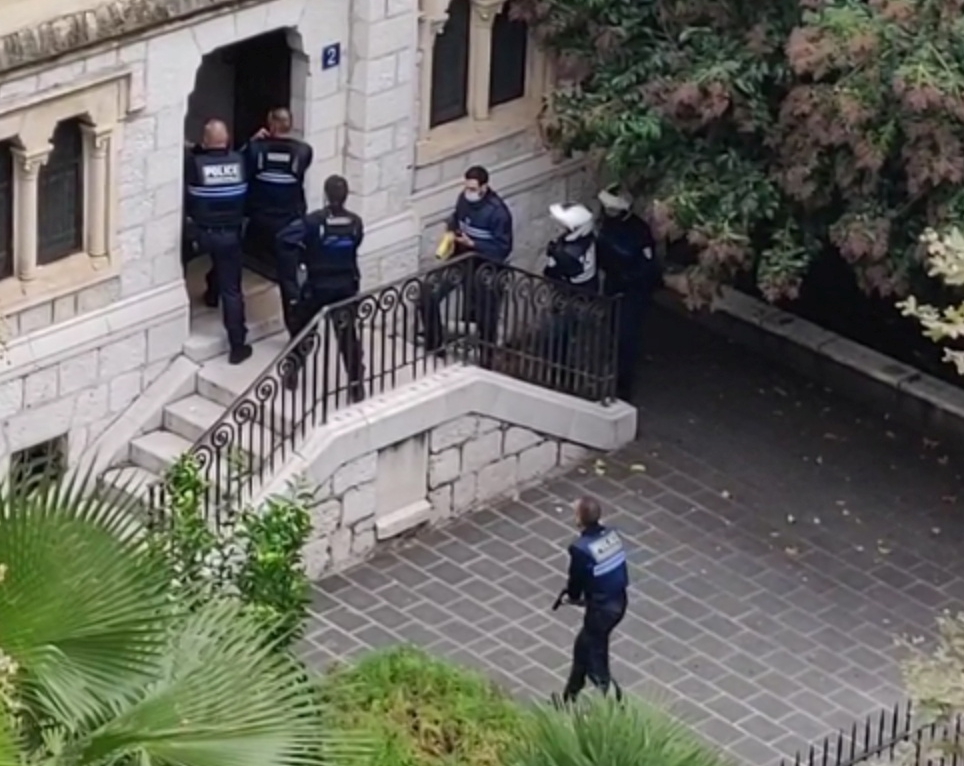 The Brazil-born care worker and mum-of-three fled to a nearby restaurant to seek help but died from her injuries.

And her last words to paramedics were: "Tell my children that I love them."

Anderson Argolo, a priest who knew Miss Silva's family, told newspaper Folha de S. Paulo: "She was a fighter, and she died like a warrior.

Despite being hurt, she ran and was able to sound the alarm, preventing a bigger tragedy."

Her sister Solange Barreto told South American newspaper Correio of Bahia: "My sister was on her way to work when she passed the church and gave her prayers.

"She fought against the assassin and even when she was wounded manage to leave the church seeking help and warning everyone what had happened until the police arrived.

"With her goodness she avoided a tragedy which could have been even bigger."

Another friend named Mirian laid flowers outside the scene of Thursday's attack before adding: "She was such a brave, wonderful person. Her passion for cooking was incredible; we were sharing recipes just days ago."

Simone was among three people who were killed in the brutal attack at by suspected terrorist Brahim Aoussaoui, a 21-year-old Tunisian migrant, who stormed the church with a 12-inch knife.

He stabbed two others to death during the horror attack, including church warden Vincent Loques, 54, and a 60-year-old woman who he beheaded.

The killer's family said he turned from drink and drugs to a hermit-like life of prayer before committing the atrocity.

Simone is reported to have staggered from the church before seeking refuge in a nearby restaurant where she was helped one of the workers and by the brother of owner Brahim Jelloule.

Her profile on Facebook shows pictures of her two young sons and a daughter, and her banner photo is a picture of Jesus.

Jelloule told TV France Info: "She crossed the street, all bloody, and it was my brother and one of our employees who rescued her, put her inside the restaurant, without understanding anything, and she said that there was an armed man inside the church."

His brother and the worker then went to the church to confront the killer, but found him armed with the blade.

They had no choice but to flee and called the police, who then swooped on the Catholic church – shooting the suspect 14 times.

The restaurant owner said Simone died about an hour and a half after being stabbed despite efforts from paramedics to save her life.

Simone was born in Salvador, Brazil, was a trained cook, currently worked giving care to the elderly, and helped organize a festival of Brazilian culture every year in Nice, reports Globo. 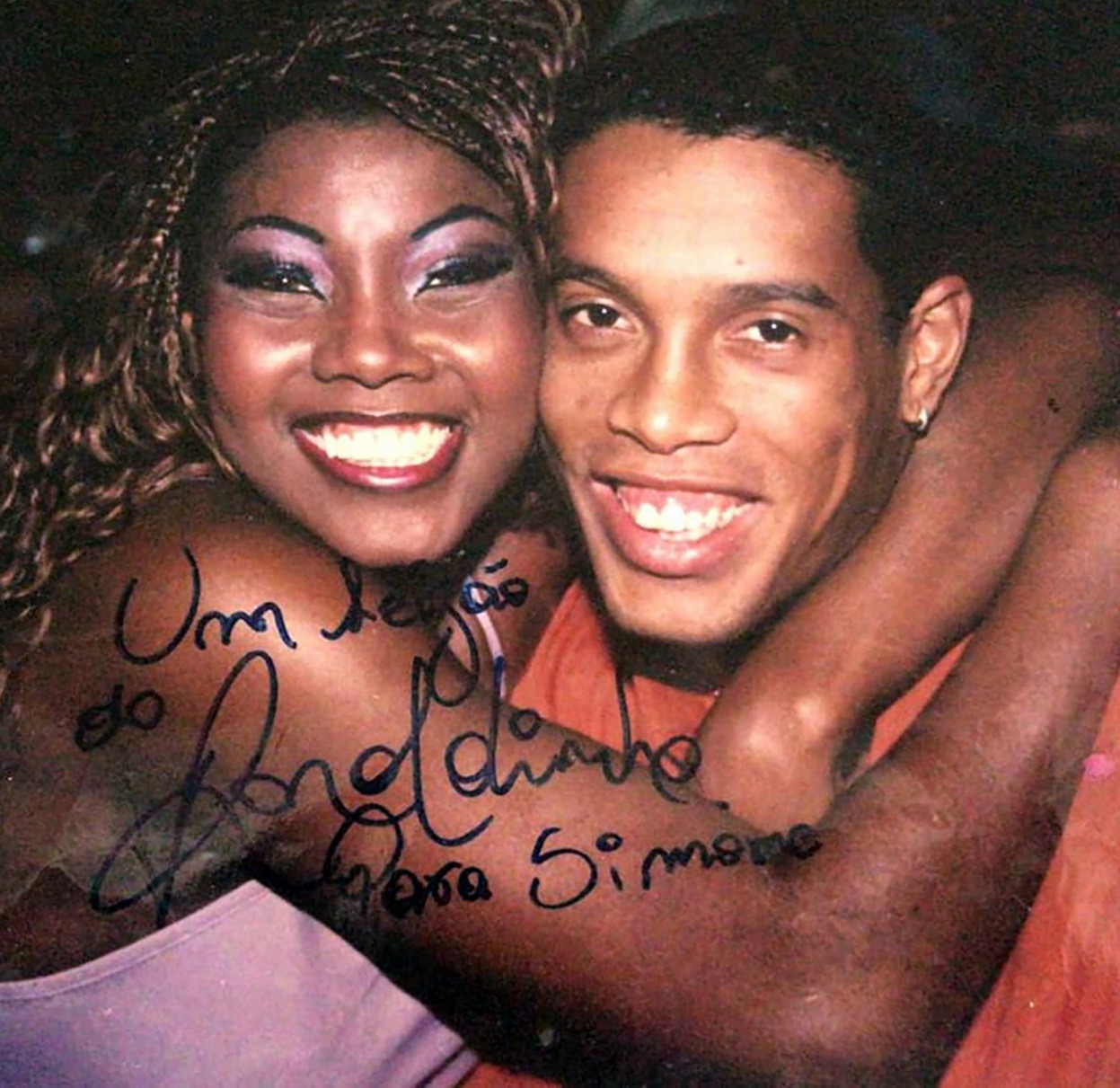 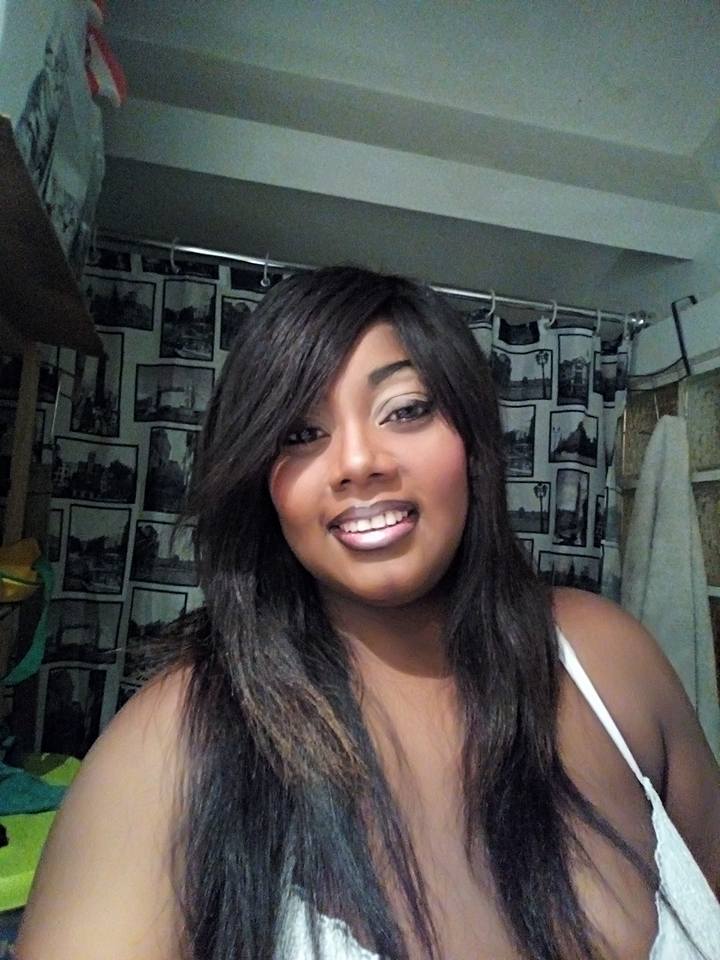 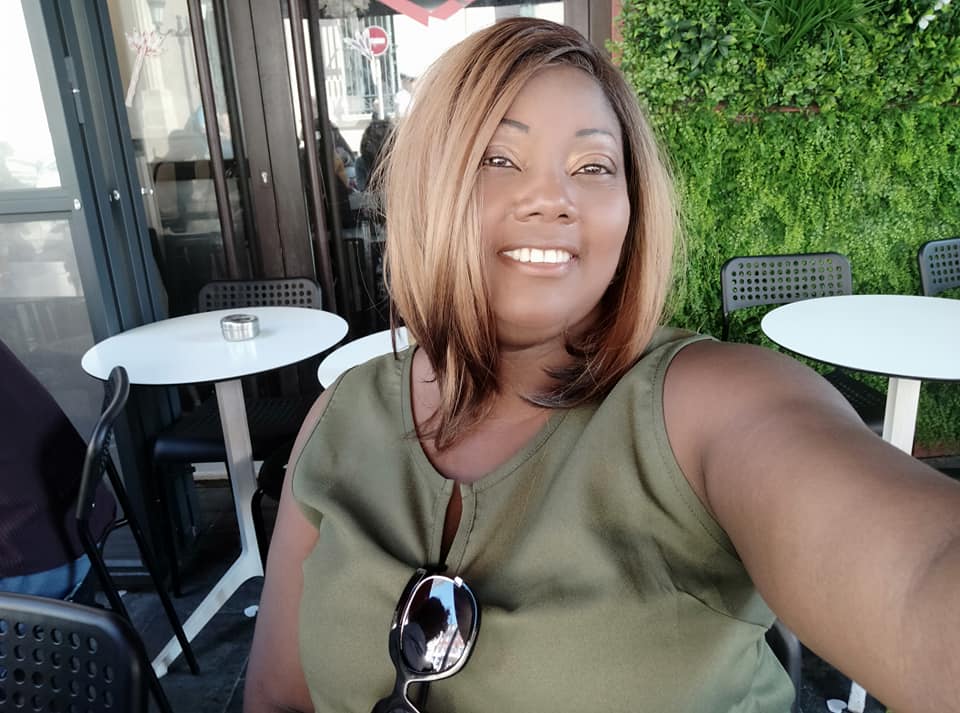 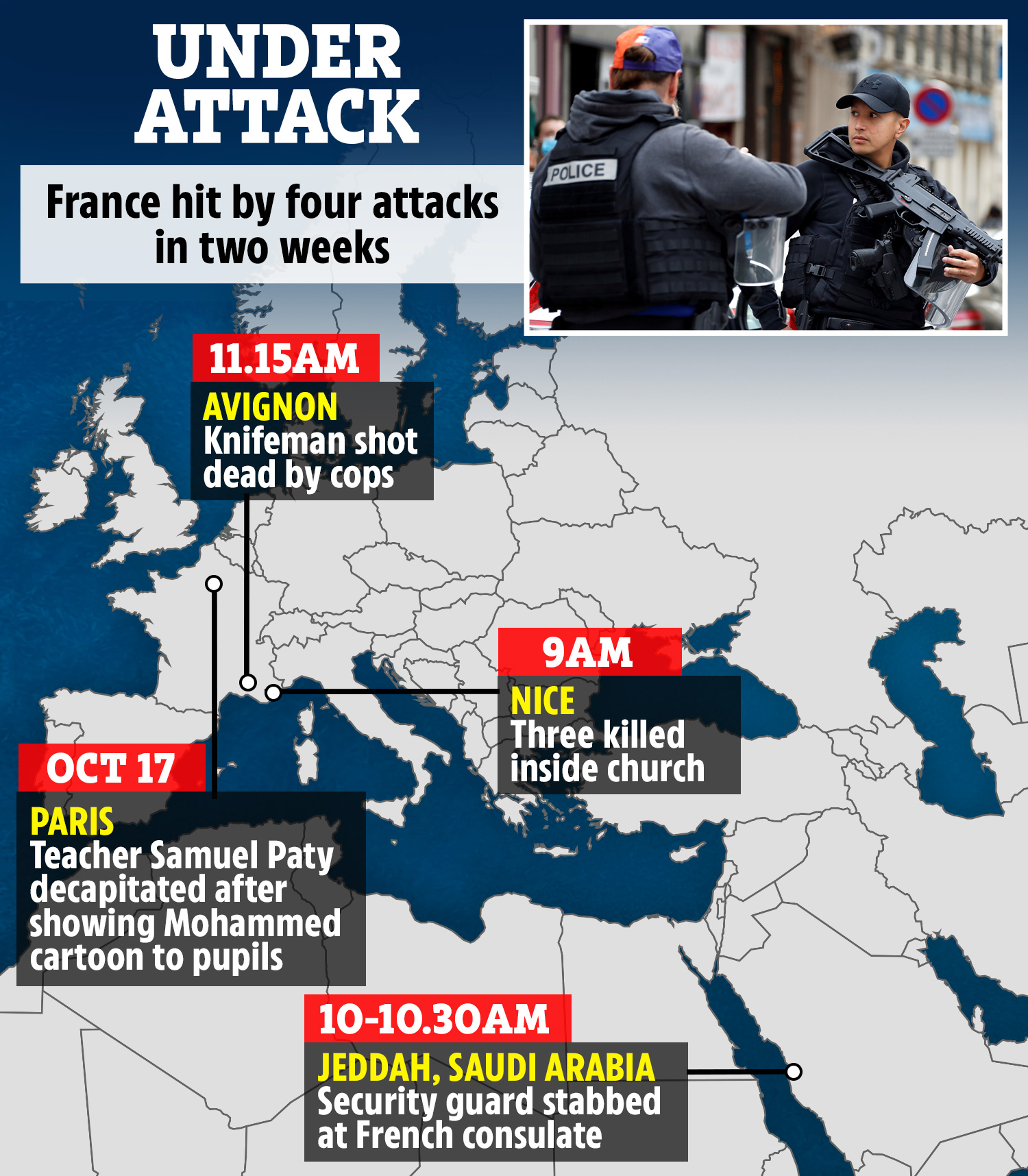 Terrorist suspect Aoussaoui was not known to the security services and travelled to Paris from Italy on October 9 after arriving at the Italian island of Lampedusa  on September 20.

He is said to have changed his clothes after arriving in Nice by train before staking out at the church at 8.29am before butchering the three church-goers over half an hour.

Mr Loquès a dad-of-two, was the building's sacristan, and was preparing for the first Mass of the day when he was attacked.

Parishioners paid tribute to him as a man who loved his church, saying "he helped, he served, he gave", reports Nice-Matin.

His body was found inside Notre Dame.

Le Parisien reports that Mr Loques had been a church warden for ten years, and members of the parish said he was “expansive and sympathetic”. 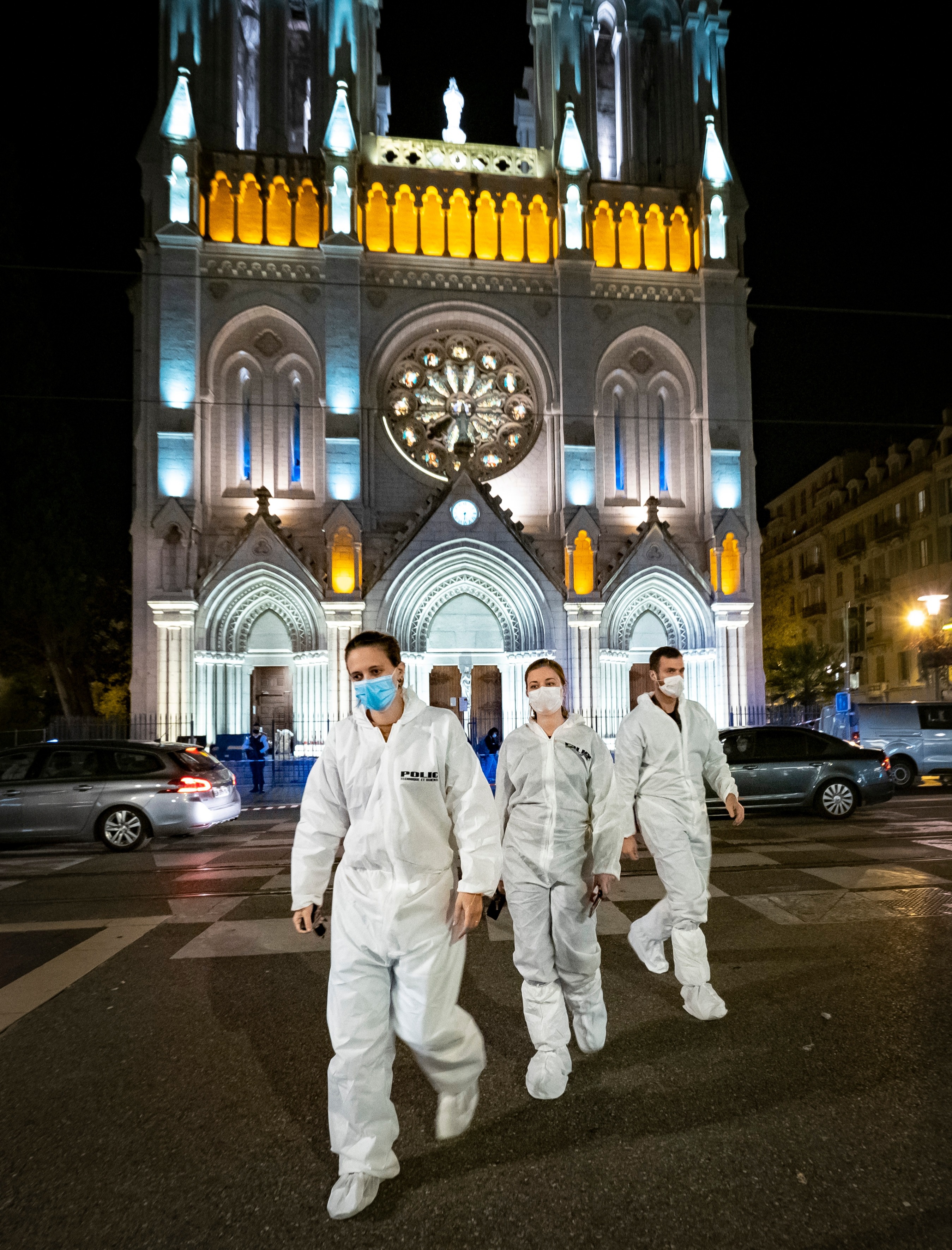 France's state prosecutor Jean-Francois Ricard said that the body of the third victim, a 60-year-old woman, was found strangled and decapitated near the font in the church.

A team of four local police officers stormed the church through a side entrance and shot the terrorist with a taser and firearms as he yelled "Allahu akbar".

The attacker was taken to hospital with serious wounds as anti-terrorist police launched an investigation into the bloody rampage.

Investigators found two unused knives, a Qu'ran and two mobile phones, in addition to a bag with some personal effects.

Counter terrorism police have also arrested a 47-year-old man in Nice on suspicion of being an accomplice.

Reports claim he was in close contact with the Aoussaoui before the attack and is believed to have given him the second mobile phone.

Brahim al-Aouissaoui is being treated in hospital and remains in a critical condition. 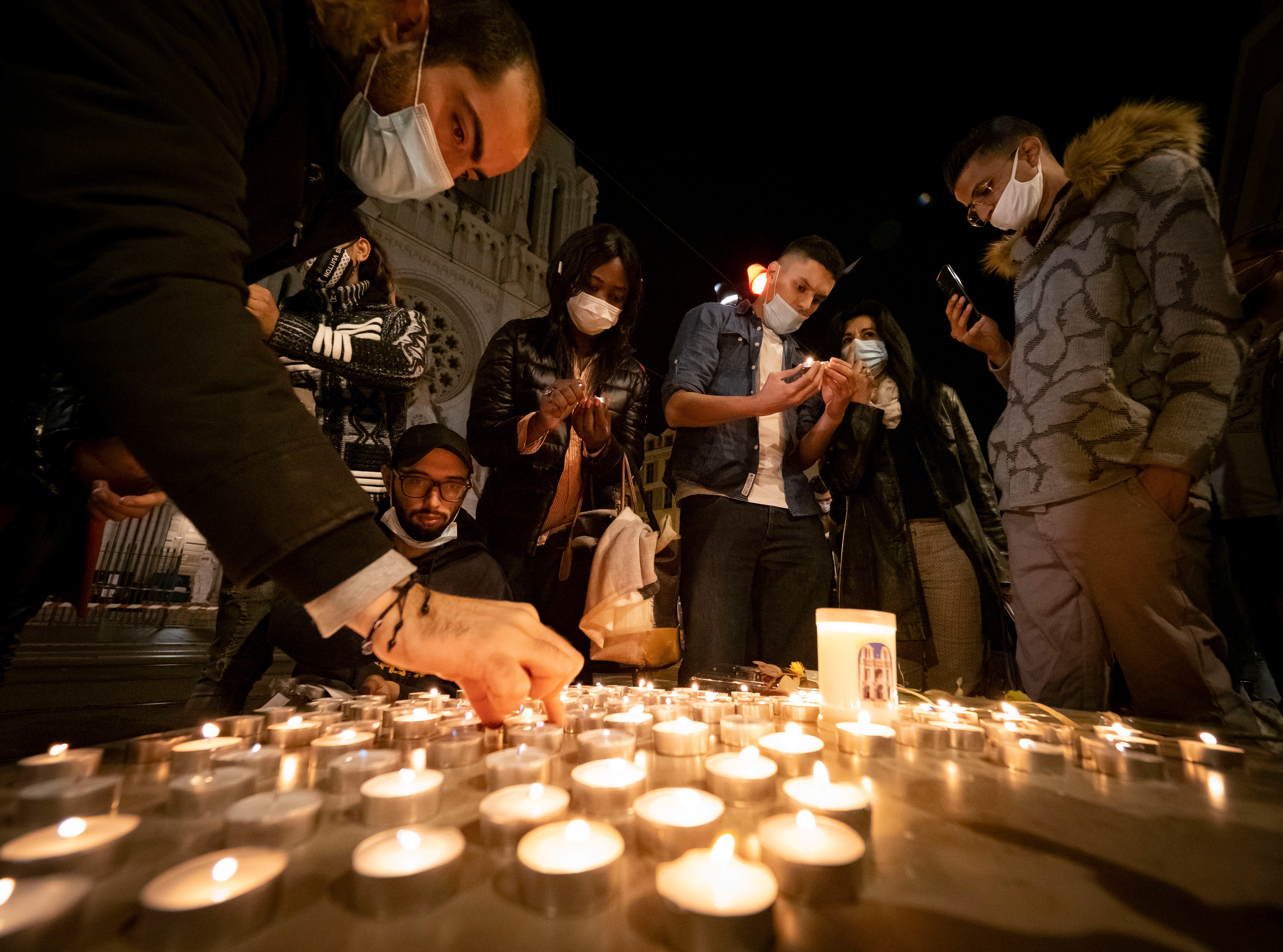 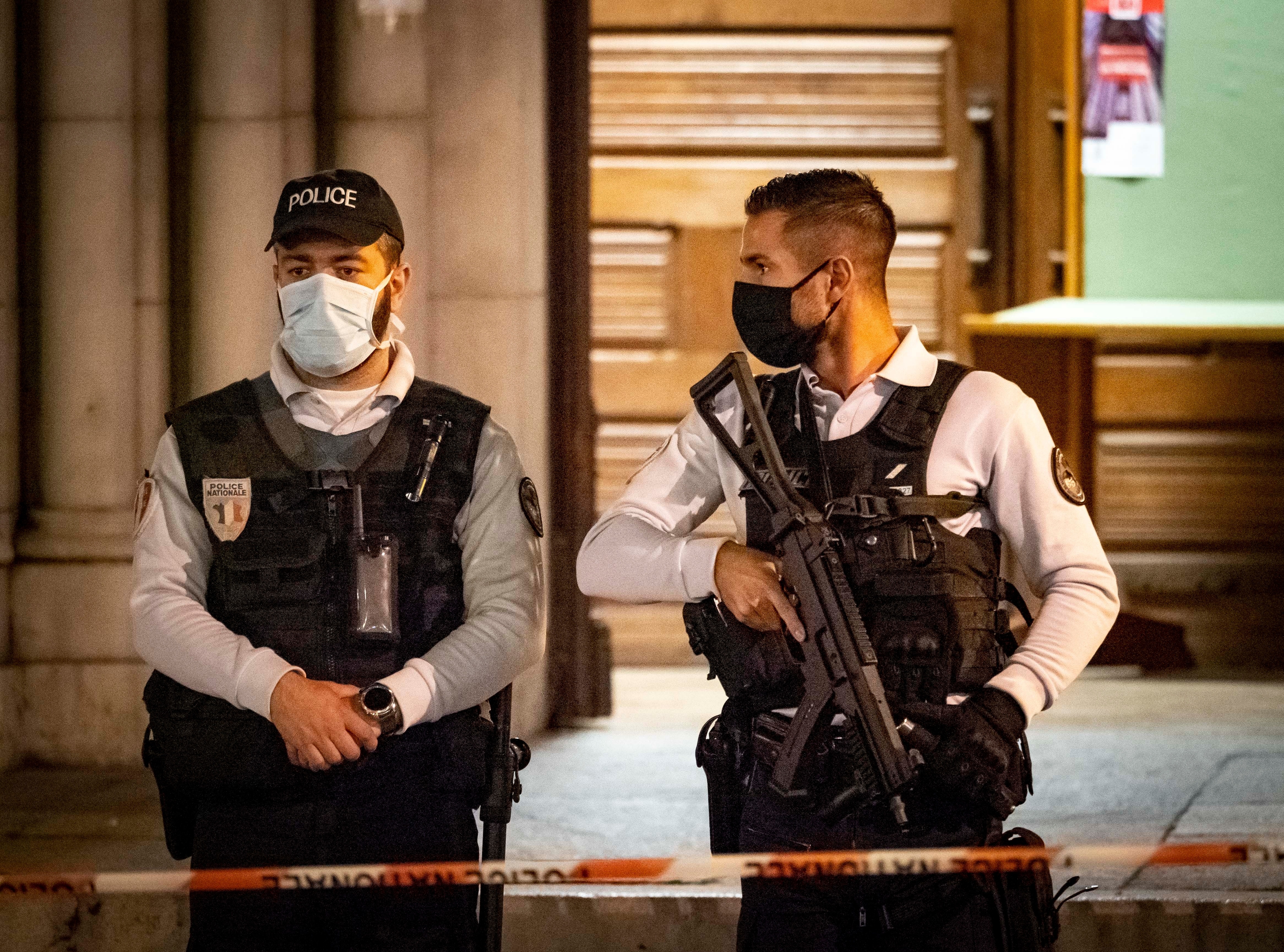 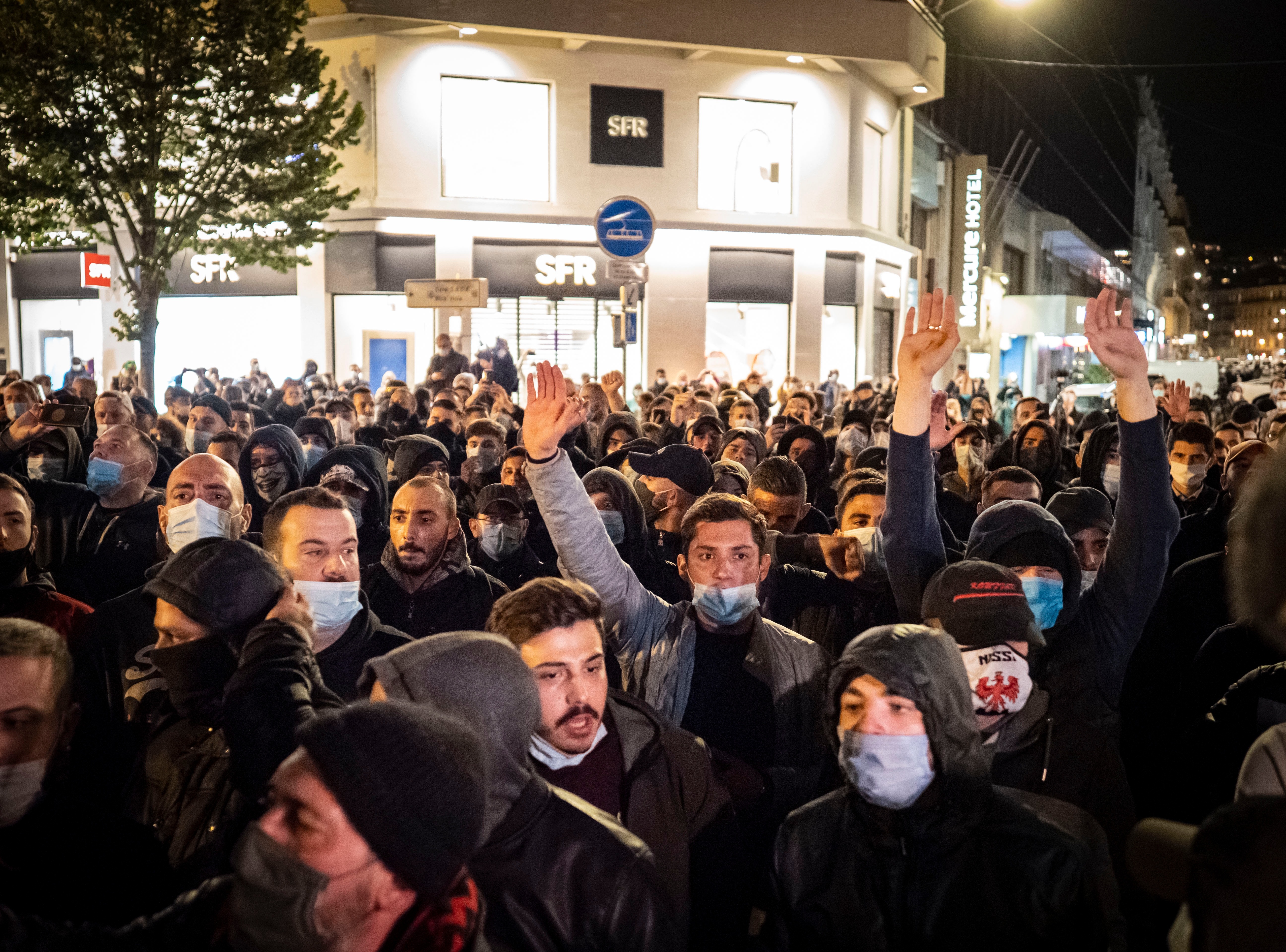