From the Archives, 1921: Bubonic plague outbreak in Brisbane 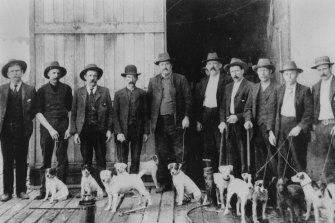 The State Health Department rat gang were an asset in the fight against the plague. Circa 1905.Credit:State Library of Queensland

An extraordinary attitude appears to have been adopted by the Queensland State health authorities in connection with the outbreak of the bubonic plague, which is now more than three weeks old. The department not only concealed the information that a death had occurred from the public, but withheld advice from the Federal Department of Public Health, which is responsible for all precautionary measures between states.

The Federal Director (Dr Cumpston) was in entire ignorance of the existence of the outbreak until Wednesday, three weeks after the patient had died. This attitude is naturally resented by the Federal authorities, who feel that the work of preventing the spread of the disease has been gravely and unnecessarily handicapped.

Dr Cumpston stated last night the Dr Elkington, the Federal officer at Brisbane, had conferred with the State authorities and decided upon the course of action. These measures should have been adopted three weeks ago.

As far as the Federal department was concerned, additional precautions were being taken to see that the no rats were taken aboard vessels loading at Brisbane. Packages which were not obviously ratproof would be opened at the quay, and every precaution would be taken to see that plague-infected rats were not transported to other ports in the Commonwealth. He did not think there was a danger of a spread of the disease through railway communication. As far as Brisbane itself was concerned, the campaign conducted by the State authority would be vigorously directed against the rats.

No further cases were reported to Melbourne last night.

The Victorian Health department is prepared for any local emergency arising from the outbreak of bubonic plague in Queensland. The chief health officer (Dr Robertson) said yesterday that under the latest regulations gazetted municipal councils were empowered to make house to house visitations of inspection if deemed necessary in the campaign against rats.

The responsibility lay with residents to see that all possible steps were taken to destroy rats on their premises. Drains and sewers, both unused and those in use, should be made thoroughly ratproof. Refuse was not to be left lying about, and it was required that all waste food and rubbish should be placed in ratproof receptacles. The authorities had power, if considered necessary, to order structural alterations with a view to removing possible places of refuge for rats.