GCHQ spy, 39, resigns after flashing woman from his hotel room

GCHQ spy, 39, resigns after admitting flashing to woman from his hotel room window for five nights in a row claiming his victim was ‘a willing and curious audience’

A GCHQ spook has quit his job after flashing a woman from his hotel room for five days in a row after wrongly believing he had a ‘willing audience’.

David McGuire, 39, was arrested after the victim took pictures of him naked at the Holiday Inn window near the spy HQ in Cheltenham – but he initially believed the photography was a sign she was enjoying seeing his genitals.

McGuire faced six charges of exposure spanning five days in May last year – but this week the case was dropped by the CPS after he promised not to do it again.

Pre-trial legal debate in court about the charges Mr McGuire faced included discussion at earlier hearings about whether actors including Daniel Ratcliffe, TV’s ‘Naked Attraction’ contestants, or naturist sunbathers were guilty of any offence by exposing their genitals.

His legal team argued that ‘no jury this side of Timbuktu would convict this defendant’ claiming he was not guilty of a crime because he had not intended to cause harassment, alarm or distress. 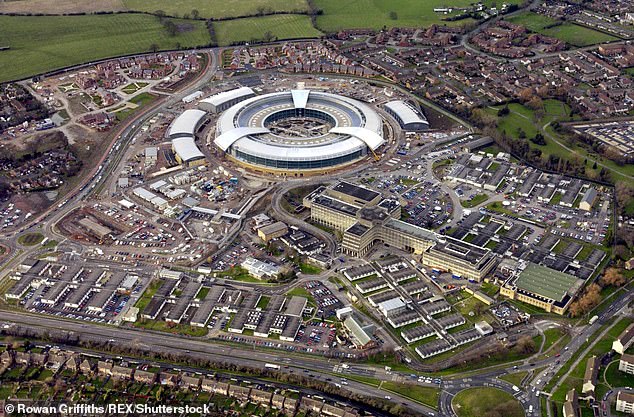 David McGuire, 39, was working at the GCHQ spy centre in Cheltenham (pictured) when he flashed a woman for five nights in a row

Mr McGuire had denied six offences of exposure between May 12 to 16 last year and was awaiting jury trial at Gloucester Crown Court in October.

The charges alleged that he intentionally exposed his genitals to caused alarm and distress to a woman who regularly saw him flashing from a window at the Holiday Inn Express in Swindon Road, Cheltenham.

But yesterday at the crown court Clare Fear, prosecuting, announced that Mr McGuire was prepared to accept a deal not to do it again and the CPS would not therefore pursue the case to trial.

‘This case has been through a protracted history,’ she said. ‘McGuire was staying at the hotel while working in Cheltenham when he began exposing himself in the window which directly looked out in the direction of the complainant, who lived opposite.

‘After the fourth night the woman complained to the hotel. It is not known if the complaint was passed on to the defendant, asking him to stop.

‘The lady then took photographs as evidence and called the police on May 16th. Mr McGuire was arrested and he admitted his actions. He told the police that when the woman started taking photographs he thought she was interested in him.’ 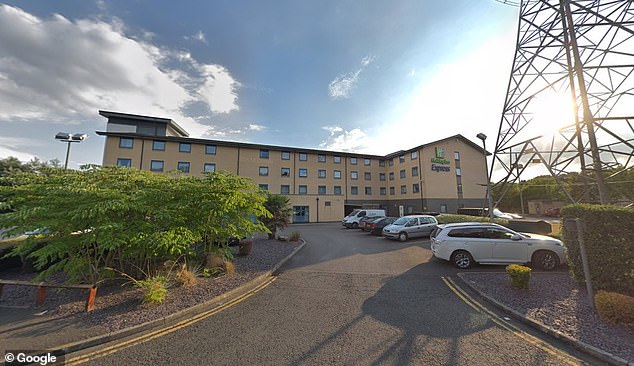 Mr McGuire was staying at this Holiday Inn when he showed his genitals to the woman, who started taking photographs, which made him think she was interested in him,  the court heard. Instead she was gathering evidence

David Maunder, defending, said: ‘In reality, this case should never have come to court.’

Judge Ian Lawrie QC, who formally recorded not guilty verdicts, interjected: ‘It wasn’t a one-off incident – it was a sequence of events night after night for a week.’

Mr Maunder added: ‘McGuire has been humiliated by his actions and has had to leave his job at GCHQ.’