A Georgia student who said he walked 7 miles to and from work each day in the hope of saving up money for a car has been gifted a new vehicle, all thanks to one woman’s heartwarming act of kindness.

The Atlanta resident told Fox News on Friday that she first encountered the teenager walking on the side of the road in the rain in December — and since then wanted to find a way to help.

“We need more love in this world,” she said. “Hate and division has plagued this world and I’m determined to do my part, one person at a time.” 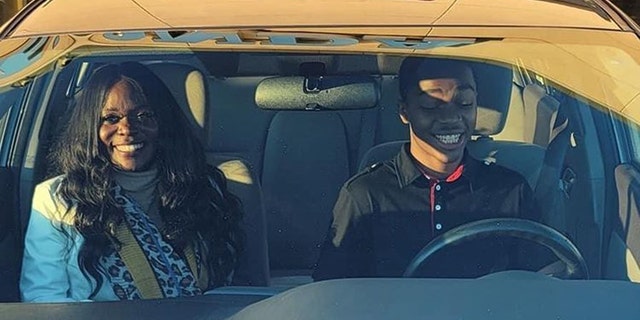 Myers told Fox News that she and Sutton initially crossed paths on Dec. 10, 2020, as she was driving through Powder Springs and ended up giving him a ride to his job.

Through conversations with Sutton, Myers says she learned he was walking seven miles each way to work because he couldn’t afford Uber rides — and that he was hoping to one day purchase his own car himself with the money he was receiving from his paychecks.

“Once I dropped him off to work his heart and determination filled my eyes with tears. He said ‘Ma’am, I walk because I have to,’” Myers told Fox News. “He was smiling in good spirit and that’s a child worth blessing.”

Myers then shared Sutton’s story on a GoFundMe page and, two days later, raised $6,365 in donations toward his goal. 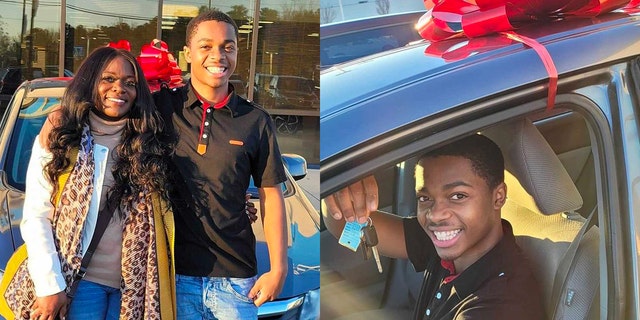 Myers says she first encountered Sutton while he was walking to his job back in December. A month later, the teen has been gifted a new vehicle.
(Courtesy Lavonda Wright Myers)

As a surprise, she then purchased a vehicle for Sutton this week at Nalley Honda in Union City using a $7,000 check.

Myers said she added $635 of her own money to reach that amount after the general manager of the dealership agreed to drop the car’s price down from around $7,800.

CALIFORNIA GIRL RAISES $32,000 FOR HOMELESS MAN WHO FOUND AND RETURNED HER GRANDMOTHER’S WALLET

Fox5 Atlanta captured the scenes Thursday when Sutton arrived at Nalley Honda, unaware of what was about to happen.

“I love her for it,” he was heard telling Myers after being presented his new vehicle. “I just want to thank you so much, you don’t even understand how much.”

Sutton told Fox5 Atlanta that he would get home from school around 3:30 p.m. each day and then “go straight to work” for 6 to 7-hour shifts at a restaurant, before once again walking home.

“I knew that if I had to walk to work every day to get a car, that is what I was going to do,” he said.

Myers adds that Sutton also received his car at an opportune time for his family, as she found out that his mother recently was involved in an accident that totaled her own vehicle. That, she tells Fox News, is one of the reasons why he was walking.

“This family could use a blessing and helping hand,” Myers said.

As for Sutton, he now has a message for those striving to achieve their goals.

“If you’re doing something good or trying to reach a goal keep doing it,” he told Fox5 Atlanta. “You might get some help. That’s what happened to me.”