Household contacts of COVID-positive people will not be required to isolate under changes to quarantine rules being considered by the country’s chief health officers and state officials.

Four senior government and health sources, who were not authorised to speak publicly, told The Age and The Sydney Morning Herald that the Australian Health Protection Principal Committee (AHPPC) was considering relaxation of the requirement for asymptomatic household contacts to isolate for seven days.

Health officials in Victoria and NSW are separately working on a plan that would allow asymptomatic household contacts who have had three doses of a coronavirus vaccine to leave isolation to attend work.

One source familiar with the AHPPC discussions said the committee, comprised of health officials from around the country, was close to recommending changes to isolation rules for household contacts that would represent a major change in the country’s pandemic management.

A small group of critical workers, such as nurses, teachers and food distribution staff, were given an exemption from isolation requirements in mid-January as staff shortages crippled essential industries. They are required to wear a mask, travel directly to work and take regular rapid antigen tests. 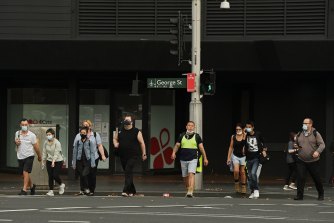 Plans being developed by Victorian and NSW officials could expand these arrangements to all other workers.

“The potential consequence might be that there are some people who transmit who otherwise wouldn’t have, but our high vaccination rate and increasing booster rate means this wouldn’t be unreasonable,” he said.

“It’s been so pervasive in the community, so this is trying to be pragmatic and learning to live with it.”

Professor Baxter, head of the Melbourne School of Population and Global Health, cautioned about loosening isolation rules while Victoria and NSW are paring back mask and density rules.

She said Australia was at a “tender” point in its pandemic trajectory. By dropping several rules at once, Professor Baxter argued, daily case numbers could plateau at about 5000 rather than 1000, meaning infections would rise off a higher base in winter. 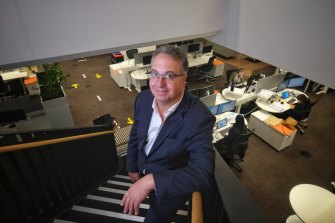 “A move like this will help keep our state’s economy moving. We are seeing other parts of the world moving ahead with revised requirements, and we can use that experience to our advantage,” he said.

But in a sign the changes could meet resistance from unions, Australian Council of Trade Unions assistant secretary Liam O’Brien said: “We must continue to maintain measures that will keep COVID-19 out of workplaces.”

He also called for financial support for close contacts and free rapid tests for workers.

Federal and state health officials have also discussed scrapping the legal requirement to isolate after a positive test and replacing it with a recommendation, two sources confirmed.

However, there is no consensus on the move and The Age and the Herald have learnt that senior health officials do not support it.

England will soon be the first major European country to allow people who know they are infected with COVID-19 to freely use shops and public transport and go to work.

Both Associate Professor Senanayake and Professor Baxter said it was too soon to make such a change in Australia.

“I would not consider the UK as my north star for pandemic management,” Professor Baxter said.

A government source said data collected regarding the relaxation of isolation rules for critical workers was giving health officials confidence they could safely relax quarantine requirements for household contacts.

A source familiar with the discussions told The Age and the Herald that a potential relaxation of isolation requirements was first suggested in national forums by NSW officials, and that Victoria was supportive of the move.

Officials from the two states have been collaborating on the plan, which would probably apply to people who have received three vaccine doses. They hope the policy would encourage people to receive a third dose.

Professor Baxter said if household contact rules were relaxed, the shift could be made safer by forcing people to wear high-quality masks such as N95s or P2s. She said household contacts should be provided with free rapid COVID-19 tests.

“The result of the change is you are going to have more people going about their daily business with COVID,” she said. “I would prefer if things were done in stepwise fashion, versus all of them happening at once.”

Grattan Institute health program director Stephen Duckett said the strictness of quarantine requirements involved a trade-off between the need to ensure positive cases were not out in the community and the intention to minimise the number of people stuck at home who could not participate in the economy and daily life.

“Governments are now accepting a different risk threshold for the potential of spread,” he said.