'He's trying to get isolated!': Dominic Raab LICKS his finger

‘He’s trying to get a week in isolation!’: Dominic Raab raises eyebrows as he LICKS his finger as he stands in for sick Boris Johnson at coronavirus press conference

Dominic Raab has been mocked for licking his finger during the latest coronavirus update in Downing Street.

The Foreign Secretary was filling in for Boris Johnson as the Prime Minister is self-isolating after testing positive for the deadly bug.

But viewers spotted the 46-year-old MP wetting his finger to turn a page, despite government advice warning people not to put their hands in their mouths. 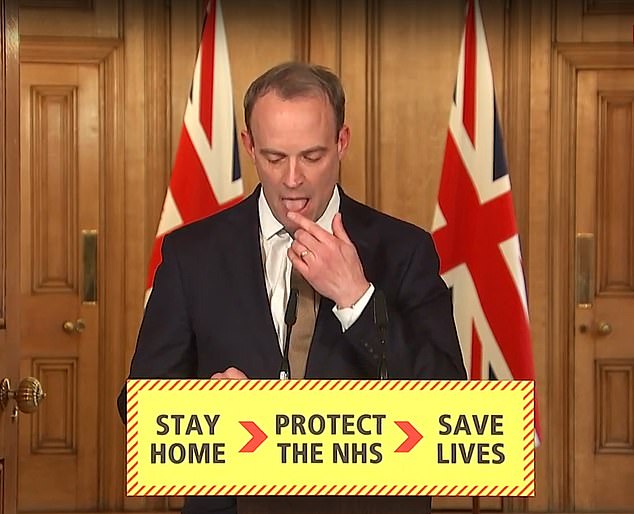 Twitter users flocked to ridicule Mr Raab and asked why he would risk his health when the PM, Health Secretary Matt Hancock and Chief Medical Officer Chris Witty are all out of action due to the virus.

One social media user posted: ‘Dominic Raab decides he doesn’t want the job any more and opts for a week of isolation instead…’

Another person put: ‘Why the hell has Dominic Raab just licked his finger to turn his notes over on live telly?!’

One wrote: ‘When Dominic Raab licked his finger I facepalmed so hard I think I fractured my skull. My hand is literally wedged in my forehead.’

A woman said on Twitter: ‘I’m sorry but did Dominic Raab just lick his finger to turn a page?’

One man commented: ‘Come on Dominic Raab, this is basic Public Health Message delivery 101. Do better.’

And another added: ‘Dominic Raab decides he doesn’t want the job any more and opts for a week in isolation instead.’ 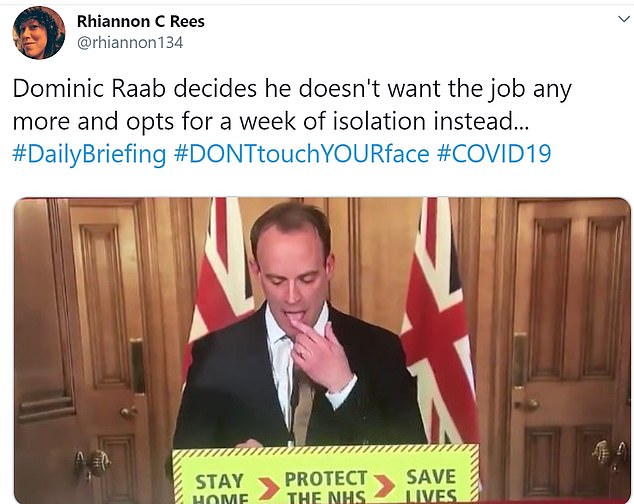 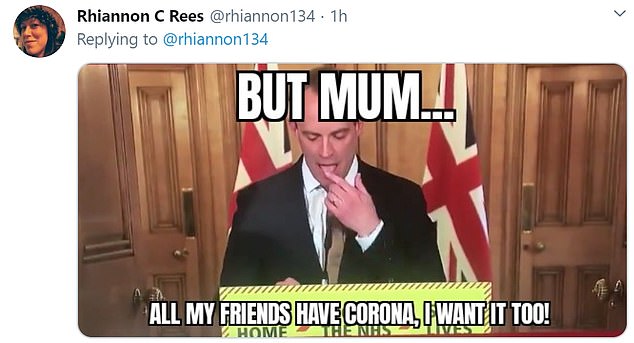 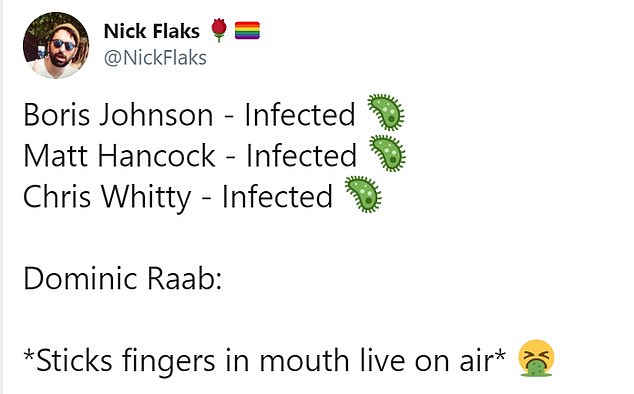 Twitter users flocked to ridicule Mr Raab and asked why he would risk his health when the PM, Health Secretary Matt Hancock and Chief Medical Officer Chris Witty are all out of action due to the virus

It comes as the coronavirus outbreak in the UK may finally be starting to slow after the daily death toll dropped for the second day in a row, with 180 new fatalities.

A total of 1,408 people in Britain have died from the killer infection, while more than 22,000 cases have been officially diagnosed.

But the true size of the outbreak remains a mystery because of the UK’s controversial policy to only test patients in hospital. 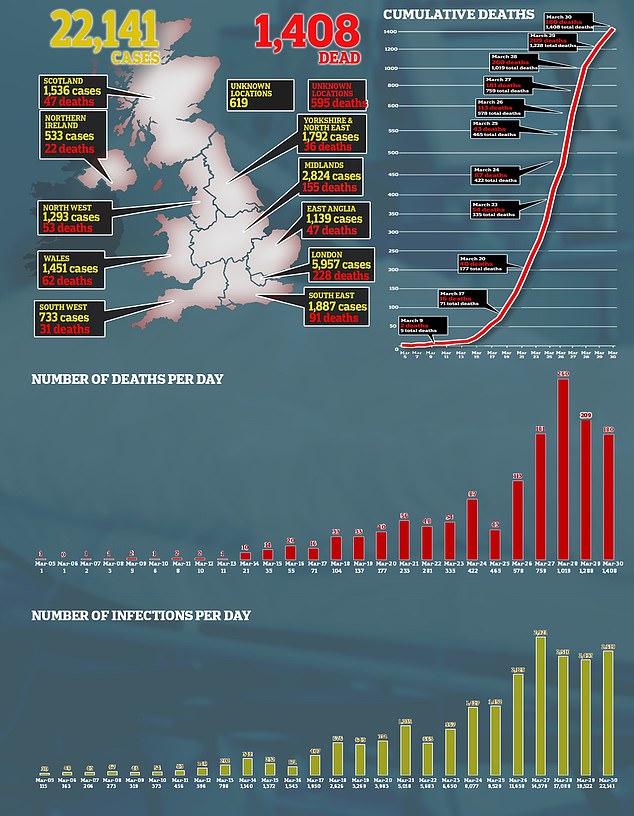 The UK’s spiralling coronavirus death toll has jumped to 1,408 after 180 more fatalities were recorded in a single day

During his speech, Mr Raab revealed ‘tens of thousands’ of stranded Britons would be flown home in a £75million partnership between the Government and airlines.

But his finger licking became the memorable moment of the press conference as people both questioned his decision and joked about it.

One wrote ‘Yes, that’s our designated survivor. I bet you feel safe now’, while another said: ‘Finger licking page turners are grim. Just go the whole hog and lick the words off the page.’

One user put next to a picture of the foreign secretary ‘do as I say, not as I do’, and one man added: ‘Dominic Raab demonstrating the best way to spread Covid-19.’

A man commented: ‘Stay home, protect the NHS. Save lives and don’t lick your fingers like I do.’ 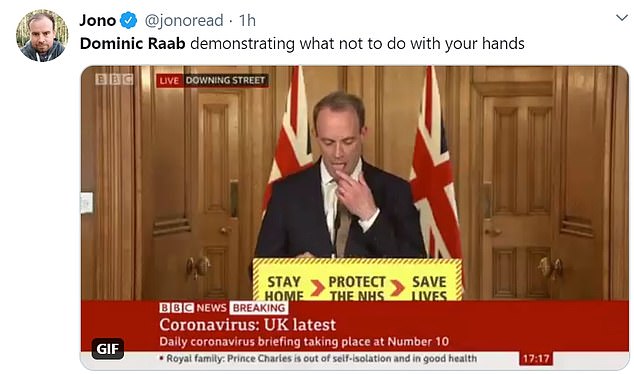 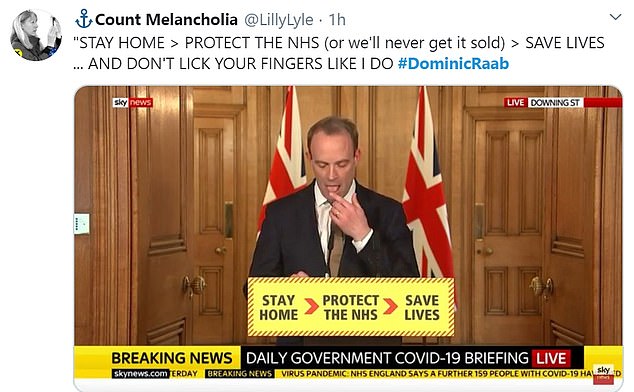 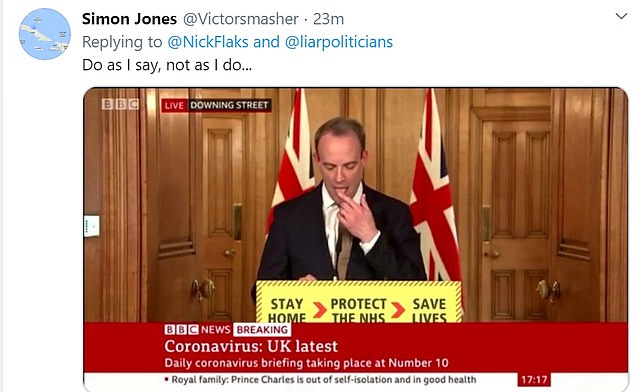 At the briefing, the Government’s chief scientific adviser Sir Patrick Vallance said people being admitted to hospital with the virus is going up ‘in a constant amount’.

But he assured the public the fact the NHS was seeing an extra 1,000 patients a day with coronavirus-related admissions was ‘not an acceleration’ and that the health service was coping.

Public Health England figures revealed the number of coronavirus tests carried out in the last 24 hours actually fell – despite Government promises to ramp up testing. 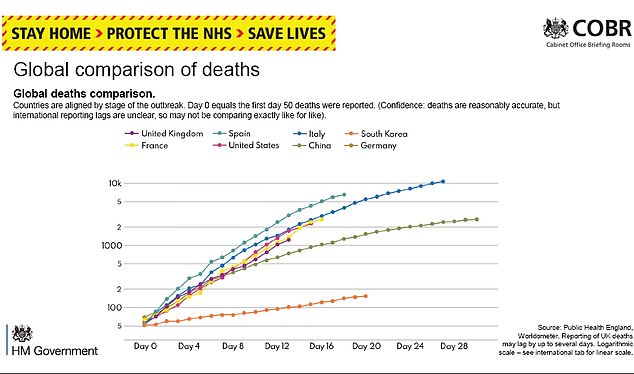 The UK’s coronavirus deaths are compared to Spain, France, Italy, China, South Korea, Germany and the US in this Public Health England chart

The confusion fuelled anger about the UK’s lacklustre approach to testing and raised questions over how Germany is managing to carry out more than 500,000 a week.

While the latest figures suggest the spread of the virus may be slowing in the UK, there ‘aren’t enough numbers in the UK’ to draw conclusions about the outbreak yet, according to Professor Michael Levitt, who accurately predicted the demise of China’s crisis after analysing the raw data.

Professor Neil Ferguson, a leading disease expert at Imperial College London, agreed it was hard to say how Britain’s epidemic was progressing. 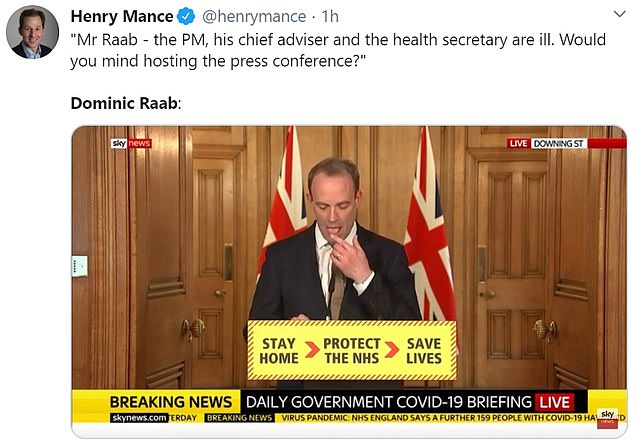