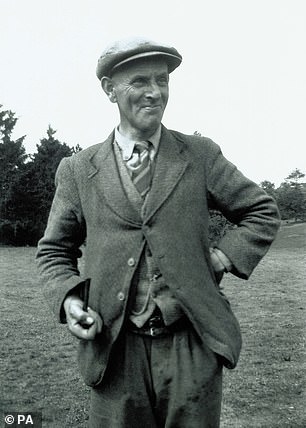 Basil Brown, pictured – who unearthed a Saxon longboat and a hoard of treasure on land at Sutton Hoo, near Woodbridge, but never enjoyed the wealth or fame he truly deserved – will finally have his story told in a major new Netflix film, The Dig

Basil Brown did not look a lot like an archaeologist – neither the dusty academic variety nor the rugged hero digging through history, like Indiana Jones. He changed his clothes infrequently, tied his work trousers up with bailing twine, and his weather-beaten face was as brown as a Norfolk kipper.

Previously a farm labourer, milkman and woodcutter, he didn’t operate much like a traditional archaeologist either. Brown liked to sniff and taste soil to divine what lay beneath and was given to sleeping under hedgerows to feel better connected to the land.

But when Suffolk widow Edith Pretty asked her local museum in Ipswich who should excavate the ancient burial mounds on her land at Sutton Hoo near Woodbridge, there was, they said, only one man for the job. And Brown’s work there resulted in a discovery without parallel.

First, he unearthed an Anglo Saxon longboat bigger than any seen before and then a hoard of treasure including an ornate helmet with a human face, a shoulder clasp crafted out of gold, jewellery set with Sri Lankan garnets, silverware from Byzantium and enamelled bronze feasting pots.

His find would ultimately rewrite the history of the Dark Ages in Europe. Yet the man himself would be side-lined by the archaeological establishment in the shape of an obese, bow-tie wearing professor from Cambridge University who reduced Brown to shovelling soil into wheelbarrows.

He would enjoy neither the wealth nor fame he truly deserved, ending his career as school caretaker.

Now his extraordinary achievement is being made into a major new Netflix film, The Dig, due to be released later this year.

It will tell the story of a very English excavation in which a tail-coated butler prepared lemon barley water on trays for a digging party whose eventual success was celebrated with a sherry reception, backed by the music of a local band.

It is also the story of a huge injustice which, even today, some 80 years later, is yet to be properly addressed. 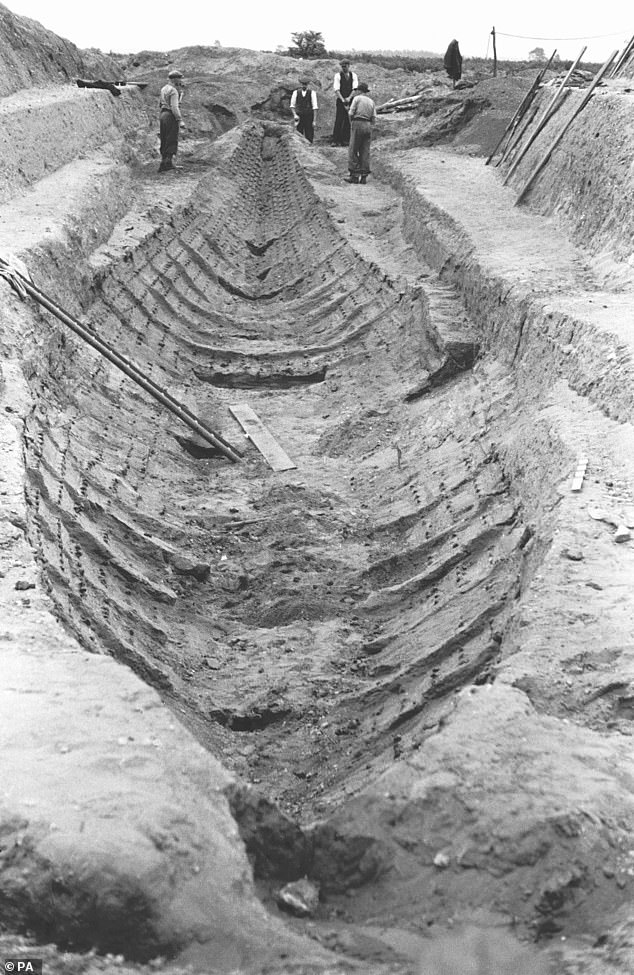 Brown uncovered the skeletal remains, pictured, of a ship 89ft long, dragged from the nearby River Deben and buried to carry a king into the afterlife

The drama begins shortly before midday on May 11, 1939 when Brown unearthed the first rivet from the long boat, a chunk of rusting iron which had tinged the sandy soil above dirty pink.

Five more rivets followed that afternoon and, within days, the outline of a great oak hull had emerged. It was the skeletal remains of a ship 89ft long, dragged from the nearby River Deben and buried to carry a king into the afterlife.

Crucially, it contained a burial site which had remained undisturbed down the centuries.

Opened two months later, on July 21, 1939, it revealed 263 dazzling treasures. But they were not Viking, as previously thought, they were far older – believed to be those of King Raedwald. He was an East Anglian monarch with sway over the rest of the country, a ruler who worshipped ancient gods yet had also converted to Christianity. This meant Brown’s find illuminated an almost unknown period of history. The Dark Ages between the 5th and 10th Centuries AD were supposed to have been a time of ignorance and barbarism after the collapse of the Roman Empire.

Yet, here was sophisticated culture, craftsmanship and evidence of trade routes which stretched through Constantinople to the Middle East and the wider world, dating from the reign of Raedwald, circa AD 599 to AD 624.

Although Sutton Hoo had long been known as Little Egypt by locals because the burial mounds vaguely resembled pyramids, nobody had seriously expected it to turn into what the newspapers of the era were quick to call ‘Britain’s own Valley of the Kings’ or ‘Britain’s Tutankhamun’.

Charles Phillips, one of the country’s most eminent archaeologists, was aghast such a globally significant discovery as this longboat with its hoard seemingly intact should had been made by an amateur, albeit one who’d enjoyed 30 years of success on Suffolk digs. 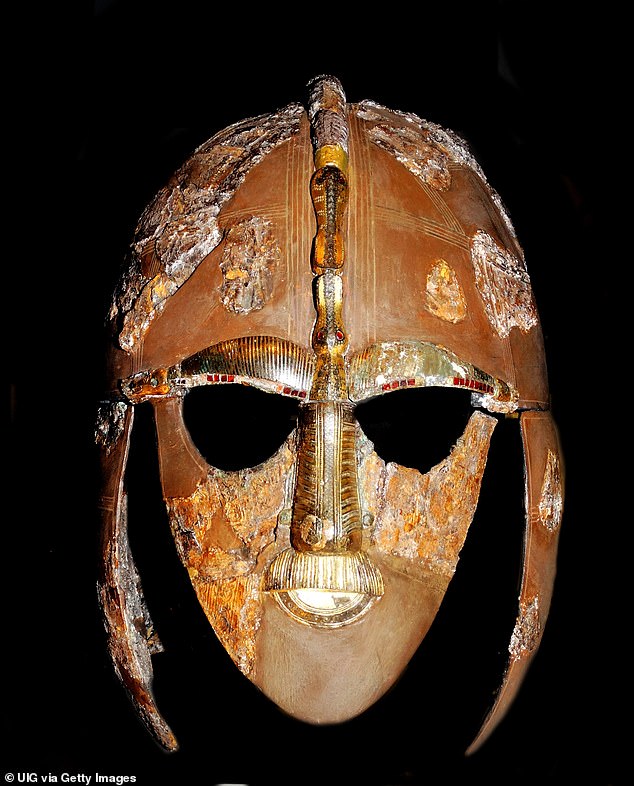 An ornate helmet with a human face, pictured, dating back to the early 7th century was among the treasure trove

A man whose enormous physical bulk was matched by his sense of entitlement, Phillips had the backing of the Government and the British Museum, too. He had raced from Cambridge to Sutton Hoo to take control in early July, ordering the maverick Brown to stop and banning him from the burial chamber. It says much about Brown’s humility and modest start in life that he tolerated such shocking treatment. He had left school at 12 to work on his father’s farm but was naturally brilliant and had taught himself to read and speak four languages, including Greek, by the age of 16. He was also a gifted astronomer.

His dig may have looked like an amateur effort, backed by Edith Pretty’s gamekeeper and gardener, but he had been meticulous in his execution and recording of it.

Combined with his expertise in Suffolk soils, he should have been invaluable to Phillips. However, ego, ambition and class snobbery would not allow it.

This was all still some years distant when Edith Pretty moved into the white 15-bedroom Edwardian mansion of Tranmer House on the estate of Sutton Hoo with her husband Colonel Frank Pretty in 1926.

She was fascinated by the burial mounds 200-300 yards from their home, a place where folklore said the ghost of a man on a white horse galloped. 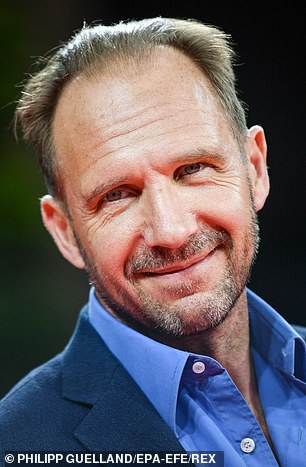 Ralph Fiennes, pictured, plays Brown in The Dig, which is due to be released later this year

Local women had long believed lying on the mounds would boost their fertility. Who knows whether Edith agreed but after more than a decade of marriage, she found herself pregnant at the age of 47, with her first and only child, Robert. He was just four years old when Frank died of stomach cancer in 1934.

His death left Edith a widow in her early 50s. It also sparked a fascination in spiritualism and the afterlife and turned her curiosity about the burial mounds into a desire to excavate them.

She hired Brown to begin exploratory work in 1938 and he returned to Sutton Hoo the following year, the point at which ‘The Dig’ begins. The relationship between landowner and archaeologist was an eccentric one, according to journalist Richard Morris, whose biography of Basil Brown is set to be published ahead of the film.

‘There was idle village gossip about a brief love affair between Brown and Edith but I found no evidence of anything other than a shared interest in Sutton Hoo,’ he says. Indeed, Brown was devoted to his wife May, often writing to her daily.

‘I think it stemmed from his passion for his work. What we do know is that Edith started locking her front door and windows so he could not get in to see her at night – if he had an idea, he was always desperate to find her to share it.

‘There’s a letter Edith wrote to a friend telling her that Brown had come in through a window and raced upstairs to start talking to her about what might be under the mound. Then he realised he was hungry – he was an erratic eater, too busy for meals – so he went down to the scullery, got some bread and butter and came back up, munching.

‘He was exceptionally bright, zealous in his work and blind to all social convention. I think, if he was alive today, we would perhaps recognise that he was slightly autistic, but it was not on the radar on those days.

‘His instinctive connection to the land made him the perfect person for the dig at Sutton Hoo. He was physically fit and mentally sharp, and believed he was better than anyone else to be doing what he was doing. But once academics from Cambridge and the Government got involved, he did not have a chance.’

The true story of Sutton Hoo has already been novelised. Author John Preston published his book The Dig, on which the movie is based, back in 2007. Today he is better known as the man behind A Very English Scandal, the 2016 novel about the disgrace of Jeremy Thorpe, turned into a BBC mini-series starring Hugh Grant.

Preston has a personal interest in Sutton Hoo since Peggy Piggott, the young archaeology student who was drafted in alongside her husband Stuart to help Phillips, was his aunt. 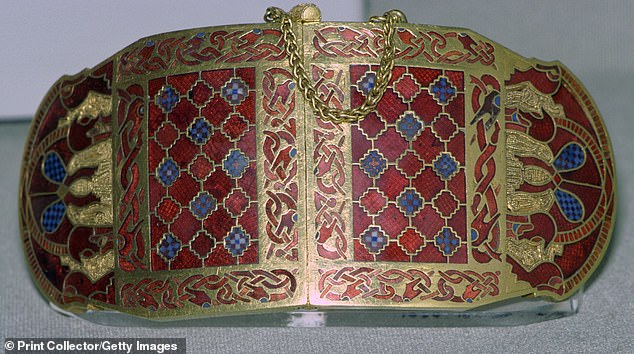 The other gems Brown unearthed included a shoulder clasp crafted out of gold, pictured

‘It is a story of intrigue, ambition, heartache and, of course, buried treasure,’ he has said. ‘As my aunt pointed out, “it was extraordinary to be uncovering the remains of this lost civilisation at a time when our own seemed to be about to be blown to smithereens”.’

Indeed it was. With the outbreak of war just two weeks away, the fate of the Sutton Hoo treasure had to be decided in haste.

Sutton village hall became the venue for a Treasure Trove inquest which made national headlines and was broadcast by the BBC’s Home Service.

Cars were parked in the beet field next door and a billiard table became the Coroner’s desk. It was August 14, 1939, summer was at its zenith, so hot that the sun simmered the creosote in the hall’s timbers.

A jury of local men was sent to discuss its verdict in the gents’ toilet since that constituted the only private space in the hall. It took them just 25 minutes to find the hoard belonged to Edith Pretty and just a few days more for her to decide to hand the lot over to the British Museum, where it remains on show today.

Then, a month after it had been dug up for the first time in 1,300 years, the treasures of Sutton Hoo were buried again, this time in a disused stretch of Tube line at Holborn to protect them from the attentions of the Luftwaffe.

Their previous resting place was given over to Army training, and a squadron of Sherman tanks ran over what had been the burial mound of a King, with bits of it also used for mortar practice.

It’s not known whether one final delightful detail has found its way into the forthcoming film. In real life, when Robert Pretty was nine and helping Brown on the excavation, he dropped a roller-skate into a burial mound by accident and couldn’t find it among the spoil.

Decades later, the British Museum asked for his permission to reopen the mound in case anything had been missed the first time.

On a return visit to Sutton Hoo he was surprised to be presented with a shoebox. ‘Inside was a rusted piece of metal with what appeared to be four wheels attached, one at each corner,’ he recalled. ‘Only after I had removed it from the box did I realise what it was: a single steel roller-skate.’