How the UK plans to source 30,000 ventilators for the NHS

The government is pursuing a three-pronged strategy to source 30,000 ventilators for the NHS to treat Covid-19 patients, ordering newly designed models, scaling up production of existing ones and importing machines from overseas.

The defence firm Babcock joined the engineering company Dyson on Thursday in revealing plans for an entirely new medical ventilator working to specifications set by the government.

A consortium called Ventilator Challenge UK, involving companies including Airbus, Rolls-Royce and Ford, is separately providing the manufacturing muscle to scale up production of proven models already made by the specialist UK firms Smiths and Penlon.

What are coronavirus symptoms and should I go to a doctor?

It is caused by a member of the coronavirus family that has never been encountered before. Like other coronaviruses, it has come from animals.

The virus can cause pneumonia-like symptoms. Those who have fallen ill are reported to suffer coughs, fever and breathing difficulties.

In the UK, the National Heath Service has defined the symptoms as:

Medical advice varies around the world – with many countries imposing travel bans and lockdowns to try and prevent the spread of the virus. In many place people are being told to stay at home rather than visit a doctor of hospital in person. Check with your local authorities.

China’s national health commission confirmed human-to-human transmission in January. As of 26 March, more than 474,000 people have been infected in more than 150 countries, according to the Johns Hopkins University Center for Systems Science and Engineering.

There have been over 21,300 deaths globally. Just over 3,200 of those deaths have occurred in mainland China. Italy has been worst affected, with over 7,500 fatalities. Many of those who have died had underlying health conditions, which the coronavirus complicated.

More than 115,000 people are recorded as having recovered from the coronavirus.

A small firm called Inspiration Healthcare has received a £4m order from the NHS for which it will import hundreds of the devices – used to keep patients with respiratory problems breathing – from the US and Israel.

A Westminster source said it made sense for the government to pursue multiple strategies in parallel to mitigate the risk of any one option failing.

The firms involved are waiting for the government to go public with its plans but the delay in announcing them is not thought to be holding up the production effort.

Dyson has revealed the most detail about its progress, including pictures of its CoVent prototype. It hopes to begin producing within weeks, pending approval from the Medical and Healthcare products Regulatory Agency (MHRA), which has been talking to Dyson during the design phase. 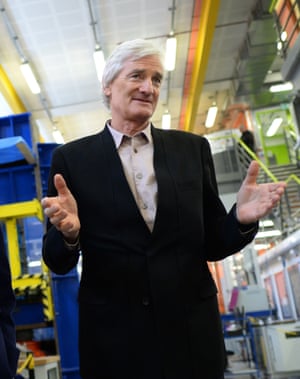 However, the government has placed firm orders for 10,000 of the Dyson machines, which will be made at the company’s lab in Hullavington, Wiltshire, a former wartime RAF base, and supplied at cost price.

The company’s founder, Sir James Dyson, has said he will pay for a further 5,000 out of his own pocket, with 1,000 reserved for the NHS and the remainder available to underpin international healthcare efforts.

Babcock is working on a new model in partnership with a leading medical equipment manufacturer, which has asked not to be identified but has experience making hospital ventilators.

Jon Hall, managing director of technology for Babcock, said: “This is a critical time for the country as a whole and for the NHS in particular. When the opportunity arose for us to get involved in helping the NHS to save lives, we knew it was the right thing to do.

“Combining our engineering expertise with advances in medical technology has resulted in a solution that will help the NHS save lives.”

The supply chain will come from secret factories in Scotland and the South West.

Dyson and Babcock both expect it to take a couple of weeks before they reach production, meaning the government faces a race against time to produce enough machines to deal with an anticipated surge in patients.

But Ventilator Challenge UK, bristling with the UK’s best-known industrial names, is thought to be ready to move faster because it is working from existing models.

These firms will help massively scale up production lines for Smiths, which already produces a lightweight portable “paraPac” ventilator, and Penlon, which makes a more heavy duty machine suited for hospital use.

Ventilator experts said smaller models typically cost about £5,000 to make, while the larger devices can sell for £25,000.

All of the companies involved are expected to waive any profits, given the national crisis, and the supply chain will come entirely from the UK, in case of any disruption to cross-border trade.

In the meantime, the government has also ordered ventilators from overseas, to ensure that it can bridge the gap until the other working groups can get up and running.

Inspiration Healthcare, based in Crawley, West Sussex, said it has taken a £4m order from the NHS and is importing ventilators from suppliers in the US and Israel.

It typically ships medical equipment to the UK but its chief executive, Neil Campbell, said the devices would come in by air because “time is of the essence”.

Breas UK, a Stratford-upon-Avon company that specialises in ventilators, is also working with the NHS to supply ventilators in the more immediate term.

The company has tripled its capacity since December, adding employees and production lines, and moving to seven-day working at factories in the UK, Sweden and the US. It is also offering remote training on how to use the ventilators for medical staff unfamiliar with them.