Hurricane Ian updates LIVE: Storm blows over for Disney as hundreds of revelers return to Orlando theme park after it was lashed by Hurricane Ian

The South Carolina beach town is being pummeled by strong winds and storm surges.

This is the second pier to collapse today because of the hurricane. Earlier, part of Pawley’s Island Pier collapsed into the ocean.

Pawley’s Island is north of Charleston.

Hundreds of people returned to Disney World on Friday when the Orlando theme park reopened after Hurricane Ian moved north.

Disney and other attractions had closed ahead of the storm but the Orlando park began a phased reopening on Friday after assessing the damage.

Disney posted a message on Twitter, promising to help its employees and the community ‘get through this together.’

‘As we keep safety in mind, our theme parks and other operating areas remain closed (Thursday) while crews assess the impact of the storm and clear debris,’ Disney said. 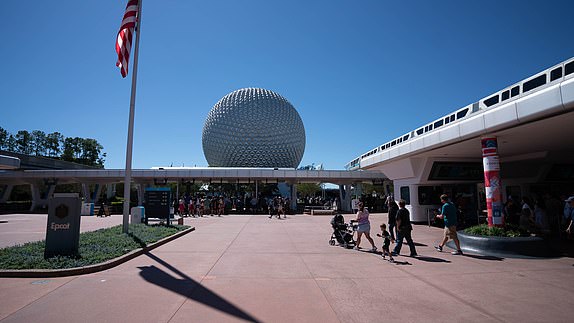 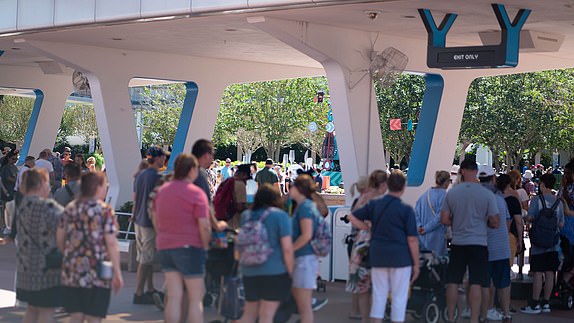 A video shared on social media shows drivers in Myrtle Beach maneuvering their vehicles through flooded streets as Hurricane Ian made landfall in South Carolina on Friday.

Over 180,000 customers are without power in Georgetown, South Carolina as Hurricane Ian makes landfall, poweroutage.us reported.

Just north of the state, North Carolina is already at 50,000 with power and increasing.

Hurricane Ian made landfall in Georgetown, South Carolina at 2:05 p.m. with maximum sustained winds of 85 mph, according to the National Hurricane Center.

However, Ian is expected to rapidly transition into a post-tropical system, and see a decrease in its strongest winds as it pushes inland.

Update: Surface observations indicate that the center of #Hurricane #Ian made landfall on Sep 30 at 205 pm EDT (1805 UTC) near Georgetown, South Carolina with maximum sustained winds of 85 mph (140 km/h) and an
estimated minimum central pressure of 977 mb (28.85 inches). pic.twitter.com/TNk43VBHUG

A Pawleys Island family and their pets had to be rescued from a flooded house as Hurricane Ian slammed into South Carolina on Friday.

Rescuers with Midway FD used a high water vehicle to rescue the residents whose home on Myrtle Avenue had filled with water.

‘Everyone is ok but a scary situation,’ police said in a tweet.

Police posted a video a short time later showing the roadway just after the rescue – which resembled a raging river.

Residents & pets at a residence on 300 block of Myrtle Ave needed to be rescued by Midway FD via their high water vehicle. Everyone is ok but a scary situation. pic.twitter.com/J8B77Rxd8f

Hurricane Ian is quickly approaching the coasts of North Carolina and South Carolina after devastating Florida.

The end of the Pawleys Island pier has collapsed & is floating south. pic.twitter.com/ajJsWeXWfN

A tornado watch is in effect for parts of the Carolinas and Virginia until 10 p.m., according to CNN.

A tornado watch has been issued for parts of North Carolina, South Carolina and Virginia until 10 PM EDT pic.twitter.com/iurD07uPXs

In footage posted on social media, residents are reporting the surf making its way to the beach access points.

Police have blocked of areas in Cherry Grove, an area of North Myrtle Beach.

Ian has not yet made landfall in the state yet, but is expected to soon.

We're getting rain and wind as Ian moves toward the S.C. coast. Check out additional webcam views here: https://www.myrtlebeach.com/webcams/

As Hurricane Ian approaches the coast of South Carolina, water levels are rapidly rising at Myrtle Beach, according to NOAA’s tidal gauge.

The water levels measured at Springmaid Pier in Myrtle Beach have risen to over 9.5 feet, and are increasing at more than a foot per hour.

This is the highest water level measured in Myrtle Beach since Hurricane Isaias in August 2020, it was reported.

This is also the fourth highest water level ever measured since the gauge was installed in 1976.

Beach is gone in North Myrtle. Surf is all the way up to the beach access. Police have stopped traffic north on North Ocean Boulevard presumably because Cherry Grove is already flooded. pic.twitter.com/5QIEpTo3FE

Charleston is being battered by gale-force winds and sideways rain as it braces for a direct hit from Hurricane Ian – as reports reveal 95 percent of homes in the city are at risk of flooding from the life-threatening 7ft storm surge.

Video has emerged on social media of the historic South Carolina town being blasted by the monster storm.

The killer hurricane has already it barreled through Florida leaving swathes of the state decimated and up to 21 dead, with many more still missing.

It then recharged back to a Category 1 hurricane and is hurtling towards South Carolina today, with neighboring North Carolina and Georgia also in its path.

8 am. #Charleston already getting some stiff winds. In a dry slot between rainbands, but blowing hard. I'm getting in the car & heading NE. Chasing #Hurricane #IAN in #SouthCarolina pic.twitter.com/CGDA7hw6Bj

Man waiting to be rescued drowns in his flooded Florida home

A man who was waiting to be rescued from his flooded Florida home drowned before rescue crews could reach him.

The 57-year-old man died Thursday night at his New Smyrna Beach home after he fell and was unable to escape the rising waters, Volusia County Sheriff’s Office said in a release.

The man and his wife were on a list to be rescued, but the home was in an area inaccessible by standard patrol vehicles.

‘Rescuers performed life-saving measures but were unable to revive the victim. He was pronounced deceased on scene. His wife and 2 dogs in the house were taken to a storm shelter,’ the release said. ‘A deputy also recovered a third dog from the home and transported it to an animal shelter.’

Sadly we have a second death to report in our jurisdiction during Ian: A New Smyrna Beach-area man lost his life last night after he fell and was unable to escape rising floodwaters in his home. https://t.co/fZqO2O4non

Videos and photos show the devastating destruction of the storm, according to new aerial imagery from NOAA shows.

Gulf Breeze Cottages, Shalimar Cottages and Motel are all gone. Only a parking lot remains of Gulf Breeze.

At least four cottages of Shalimar, or what remains of them, are now in a street.

Island Inn’s main building and Traditions on the Beach restaurant have also been destroyed.

Mitchell’s SandCastles has also been completely destroyed and is covered with sand.

‘I am struggling to find the words to convey my feelings, as I am sure most of us are as we look to the past four days,’ Smith wrote.

‘All our lives and our island have been forever changed. What we do tomorrow and the days and months ahead will redefine and strengthen our community.’

Our field crews were able to make it to Sanibel island today and captured aerial footage of the damage. The only road in/out of the island was damaged extensively and rescues are being conducted by Coast Guard helicopter pic.twitter.com/rpSDUGjHy0

This morning Sheriff Carmine Marceno took a tour of Lee County to begin assessing damage caused by Hurricane Ian.
We are devastated. Our hearts go out to every resident who is impacted. The Lee County Sheriffs Office is mobile and will stop at nothing to help our residents. pic.twitter.com/S4OsB8ajRv 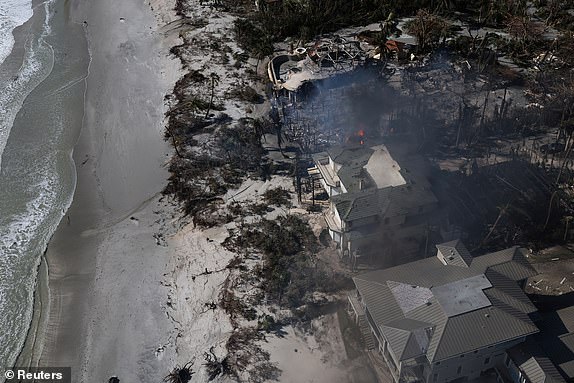 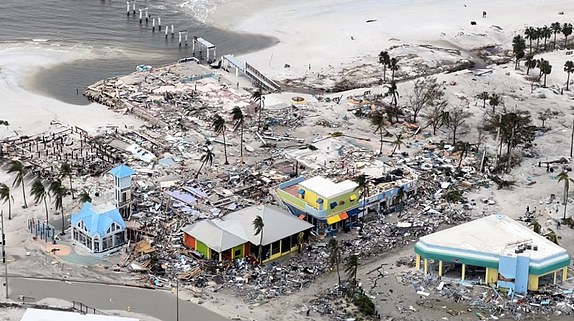 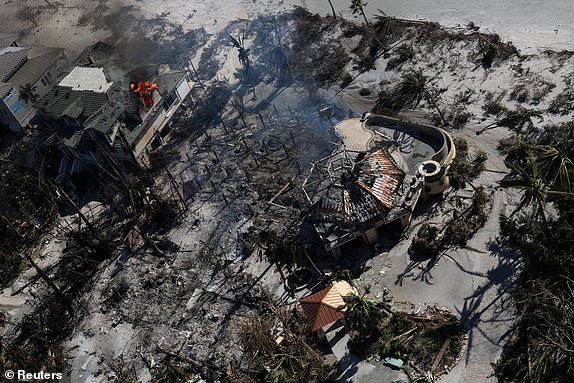 Disney World is back open after being closed Wednesday and Thursday as Hurricane Ian barreled through Florida.

Video and photos of the park this morning showed it operating as normal.

Disney had instructed guests to hunker down in hotel rooms until the storm passed.

Universal Studios also said that it will reopen today.

Disney’s Boardwalk Resort has mist one canopy that got damaged and it’s already being repaired. #HurricaneIan #DisneyWorld pic.twitter.com/5WxmDE8lFt

Human remains have been found in a flooded Florida home as search and rescue efforts continue in the aftermath of Hurricane Ian.

Officials believe there are at least 21 deaths so far.

But Kevin Guthrie, Florida’s emergency management director, explained that the state is trying to verify whether 20 of the death were as a result of the storm, or unrelated causes.

‘Let me paint the picture for you. The water up over the rooftop and we had a Coast Guard rescue swimmer swim down into it and he could identity what appeared to be human remains,’ Guthrie said.

‘We want to be transparent, but we just don’t know that number.’

500 people evacuated from North Port as flooding worsens in Florida

Emergency officials are evacuating 500 people from North Port, Florida as flooding worsens in the aftermath of Hurricane Ian.

‘Emergency crews are working w/ FWC to get boats out and take people to North Port High, the evacuation shelter nearby.’

‘Neighborhoods south of the park near I-75 are getting that flow of water the most. Because the creek water can only rise so high, it’s now spreading.’

‘Rescuers are moving as quick as they can, but 500 is a LOT of people. Taylor says if you have a kayak it’s best to try and get out yourself. However, be cautious of snakes and septics in the water. These flood waters are flowing over pasture lands. Stay as dry as possible!’

Here's a look at the area. The neighborhoods below the park and I-75 are being impacted as the creek water flows south. @johnscalzi tells me this area consistently floods during heavy rainfall, so now even more so. pic.twitter.com/AMeYbghVSN 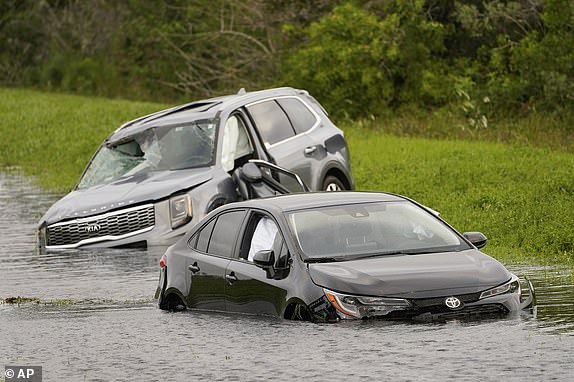 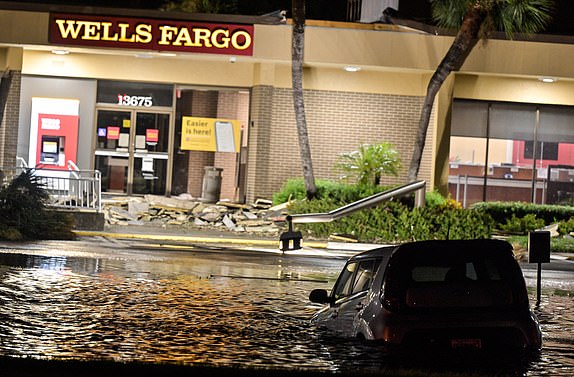 State Governor Ron DeSantis on Friday described the coastal Fort Myers area as ‘ground zero,’ adding ‘but this was such a big storm that there are effects far inland.’

Many people evacuated, but thousands chose to shelter in place. DeSantis said Florida officials had so far contacted 20,000 people who chose to stay.

At least 12 people have been confirmed dead, according to local officials, the majority of them in Charlotte county.

DeSantis has warned that it was too early to give a death toll, and that concrete information about casualty numbers could be expected over several days.

The NHC has issued a hurricane warning for South Carolina’s entire coast, as well as portions of Georgia and North Carolina. 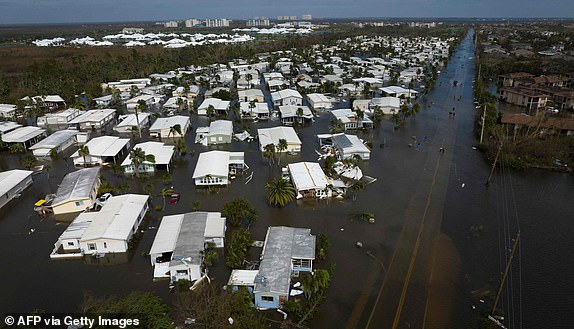 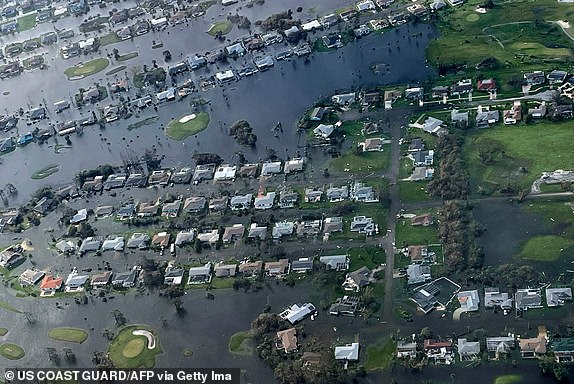 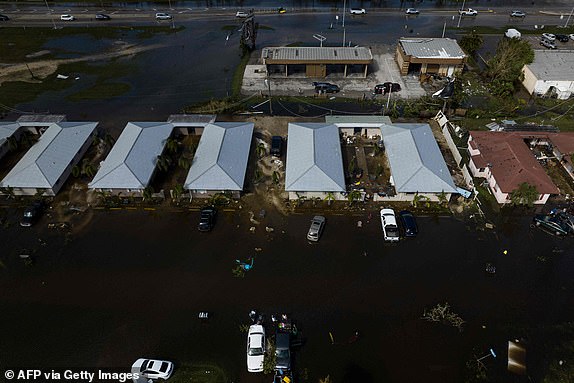 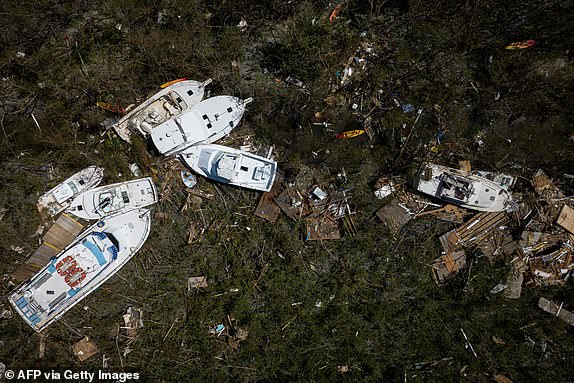 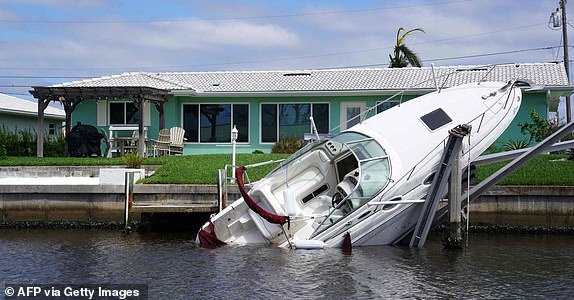 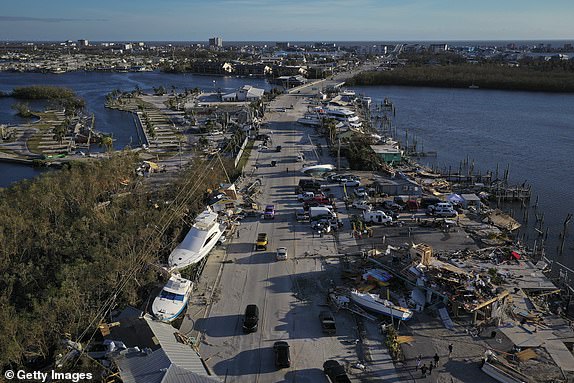 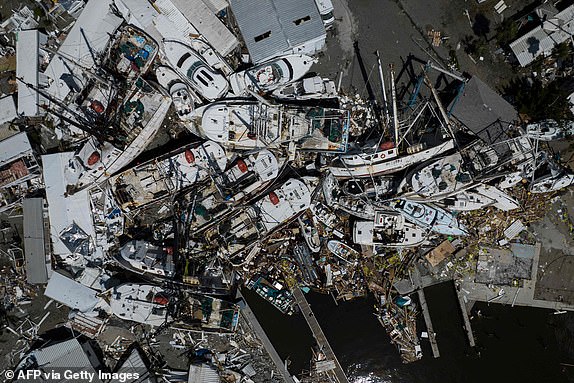 Forecasters are predicting a storm surge and floods after megastorm Ian caused catastrophic damage in Florida and left people trapped in their homes.

‘Life-threatening storm surge and hurricane conditions expected along the Carolina coast by this afternoon,’ it warned in a 5 a.m. update. ‘Flooding rains likely across the Carolinas and Southern Virginia.’

Streets in the 350-year-old city were largely empty, an ordinarily packed morning commute silenced by the advancing storm. 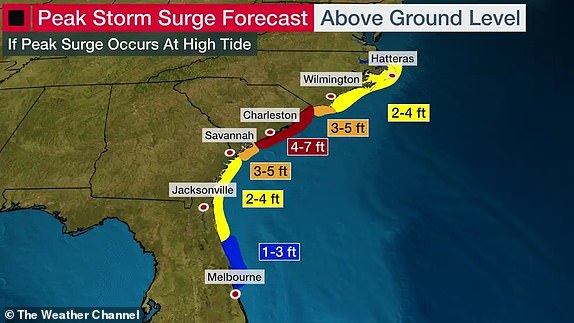 At least 21 people are believed to be dead in Florida after Hurricane Ian, according to a news briefing Friday morning.

Local officials confirmed 12 people at the time, the majority of them in Charlotte county.

DeSantis has warned that it was too early to give a death toll, and that concrete information about casualty numbers could be expected over several days.”

The 20 unconfirmed deaths were from Charlotte and Collier counties. 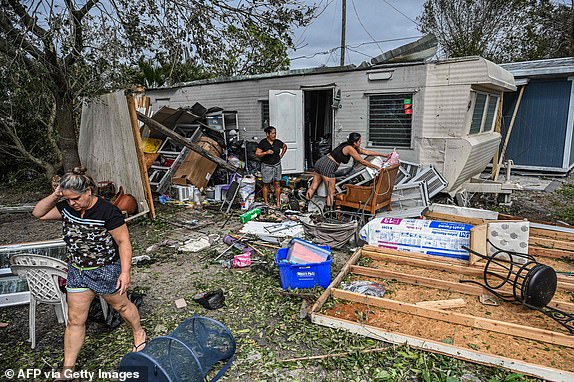 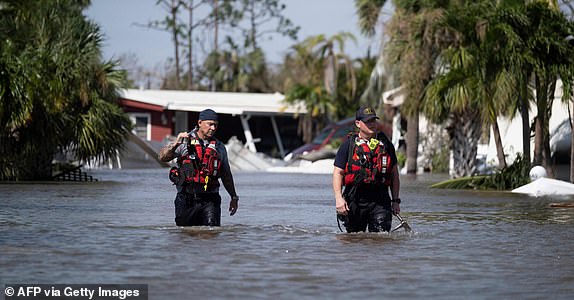 About 1.9 million people in Florida are without power, according to Florida Gov. Ron DeSantis.

Crews are working round the clock to restore power.

Hillsborough and Pinellas Counties: 15% to 18%

More than 2 million homes and businesses in Florida were still without power on Friday after Hurricane Ian barreled across the state on Wednesday and Thursday.

That is down from more than 3.3 million power customers affected by Ian since it hit Florida’s Gulf Coast on Wednesday as utilities restored service after the storm passed through their territories.

Lee County ‘had a water main break for their county water utility. That means that the county does not have water at this point, and you need that to be able to function in society,’ DeSantis said in an update on Friday morning.