Husky puppy ransacks kitchen drawer and rifles through a cupboard

A naughty husky puppy was caught rifling through her owner’s kitchen cupboards and ransacking drawers when she was left alone in the house.

One-and-a-half-year-old Lilu taught herself how to open drawers and cupboards so she can find her treats when she is alone in her owner’s Los Angeles home.

A video filmed by the owner’s friend Alina Gritcenko, 24, caught the cheeky pooch in the act.

In the footage, Lilu stands on her hind legs while she uses her front paws and teeth to push open one of the kitchen drawers, climbing in to have a look around. 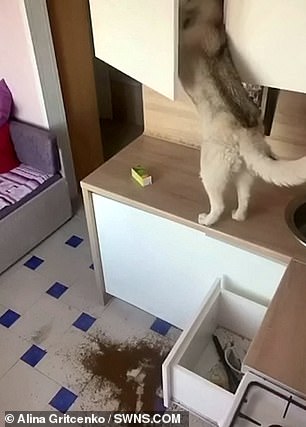 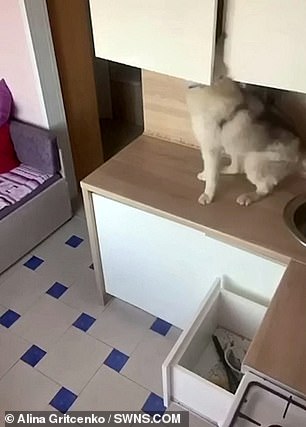 Not finding her treats, the intelligent dog climbs onto the kitchen counter and uses her nose to push open the cupboards.

A box drops from the cupboard but Lilu ignores it and continues the hunt for her treats.

She lifts her head and paws into the cupboard to sniff out her snacks, knocking an entire pot of coffee on the floor in the process.

But Lilu doesn’t cry over spilt coffee and continues her hunt for food, ignoring the smashed jar at her feet. 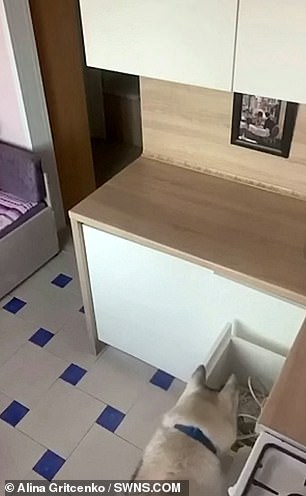 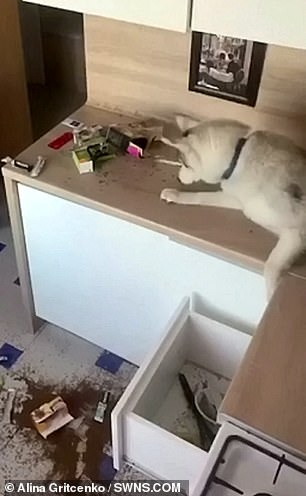 A video filmed by the owner’s friend Alina Gritcenko, 24, caught the cheeky pooch in the act. Her owner thinks growing up with cats gave Lilu a talent for sneaking around

Lilu manages to make a huge mess when she pushes most of the cupboard’s contents onto the counter and the floor.

The naughty dog then abandons the cupboard search to sniff the food but is disappointed her treats are not amongst the mess.

Alina said: ‘The video was taken a few weeks ago in my friend’s apartment.

‘We planted a camera in the kitchen because Lilu made a mess before and we weren’t sure how. 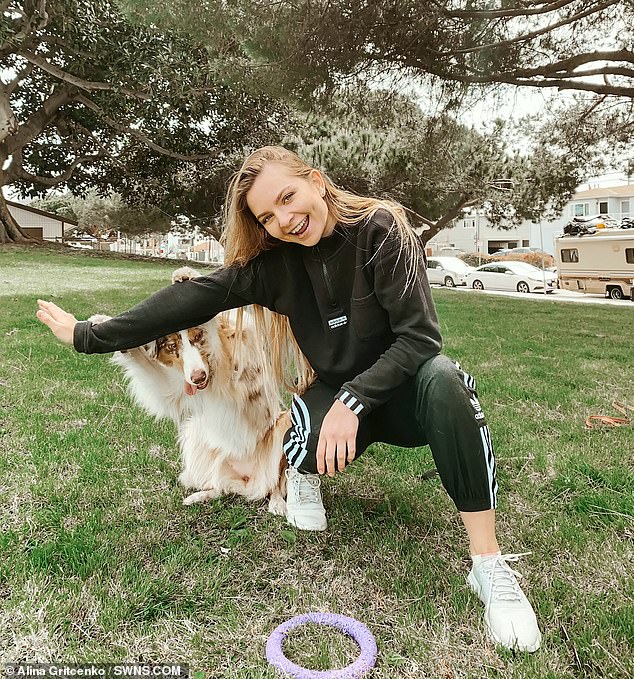 Alina Gritcenko, 24, is a dog trainer and hopes she can train Lilu to be as well-behaved as her own dog Hope (pictured)

‘She grew up with a cat so we think that’s where she’s getting her skills from.

‘She was looking for her treats, but clearly got into the wrong cabinet.’

Her owner thinks because Lilu grew up with cats she has a talent for sneaking around and making a mess.

Lilu was still stuck on the counter as she was too scared to jump off it by the time her owner came home.

Alina said: ‘I’m a dog trainer myself so now I’m helping my friend to train Lilu and we are hoping one day she’ll be as well behaved as my own dog.’