Manila: Philippine President Rodrigo Duterte will not cooperate with an investigation into the country’s bloody war on drugs planned by the International Criminal Court, his spokesperson said on Tuesday while defending the administration’s record on human rights.

Rights groups and critics of the drug killings have welcomed the step by the ICC, saying a full-scale investigation would bring justice closer for the families of thousands of people killed.

Despite concerns from the international community about the crackdown on drugs, Duterte remains popular at home and many Filipinos back his tough stance on crime. 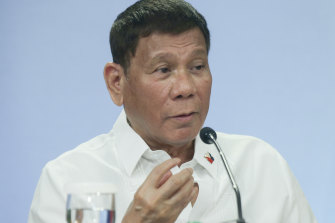 “We will not cooperate because we are no longer a member,” the President’s spokesperson Harry Roque told a news conference.

Duterte cancelled the Philippines’ membership of the ICC’s founding treaty in March 2018, although, under its statute, the ICC has jurisdiction for crimes committed while a country was a member until a year after it sought to withdraw.

“We do not need foreigners to investigate killings in the drug war because the legal system is working in the Philippines,” Roque said, adding he believed launching a formal probe was “legally erroneous and politically motivated.”

The ICC’s chief prosecutor sought authorisation on Monday to open a full investigation into the killings, saying crimes against humanity could have been committed.

“I announce that the preliminary examination into the situation in the Republic of the Philippines has concluded and that I have requested judicial authorisation to proceed with an [formal criminal] investigation,” Fatou Bensouda said in a statement.

Bensouda had said in December that there were reasonable grounds to believe crimes against humanity had been committed during Duterte’s bloody anti-narcotics crackdown.

According to Philippines government data, from the time Duterte took office in 2016 until the end of April this year, security forces killed 6117 drug dealers in sting operations.

In an address recorded before the news of Bensouda’s request broke, Duterte called on human rights organisations to take a closer look into his war on drugs.

“You would notice that there are really persons who die almost daily because they fought back,” he said, warning drug dealers: “Do not destroy the country. I will kill you.”

The Philippines Justice ministry declined to comment on the announcement from the ICC in The Hague.

Bensouda, in concluding her preliminary inquiry in December last year, said there was a “reasonable basis to believe that the crimes against humanity of murder, torture (…) and other inhumane acts were committed” between 2016 and 2019.

Many people killed in Duterte’s crackdown had been on a drug watch list compiled by authorities or had previously surrendered to police, while a significant number of minors were victims, Bensouda’s office said in a report six months ago.

Human rights groups accuse Duterte of inciting deadly violence and say police have murdered unarmed suspects and staged crime scenes on a massive scale. Police deny this and Duterte insists he told police to kill only in self-defence.

Under the ICC statute, the prosecutor must ask judges for permission to open an official investigation into alleged crimes. The tribunal’s judges have up to four months to issue a decision on such a request.

In March 2018, Duterte cancelled the Philippines’ membership of the ICC’s founding treaty just weeks after Bensouda announced the preliminary examination was under way. He said the ICC was prejudiced against him.

Under the ICC’s withdrawal mechanism the court keeps jurisdiction over crimes committed during the membership period of a state, in this case between 2016 and 2019 when the Philippines’ pullout became official.

In an interview on Monday, Bensouda said the ICC’s relations with the US ad been plunged into the deep freeze under the Trump administration but was undergoing a “reset” under Joe Biden.

The Trump administration hit Bensouda with sanctions for pressing ahead with investigations into the US and its allies, notably Israel, for alleged war crimes. She was subjected to a travel ban in March 2019 and – 18 months later – a freeze on her US-based assets.

“I do believe that it was wrong. Really, a red line has been crossed,” Bensouda said of the sanctions.

Biden lifted the sanctions in April, but his Secretary of State Antony Blinken stressed that Washington still strongly disagreed with some actions taken by the court.

The court is investigating allegations of possible war crimes and crimes against humanity by US troops and foreign intelligence operatives as part of a wide-ranging investigation into the Afghanistan conflict that also covers alleged crimes by Afghan government forces and the Taliban.

Afghan authorities have asked the court to take over the probe.