London: British Prime Minister Boris Johnson says he will keep asking Australia to lift its ambition on climate change before a crunch summit in Glasgow later this year. 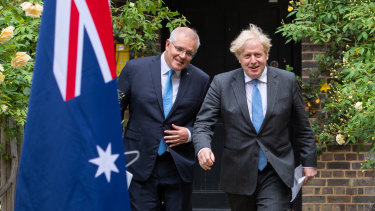 Scott Morrison and Boris Johnson in the garden of 10 Downing Street after striking a trade deal.Credit:Getty Images

Speaking at a Downing Street press conference to celebrate a new free trade deal between London and Canberra, Johnson – one of the most progressive world leaders on climate change – was questioned over whether he wanted stronger action from Morrison at the COP26 climate summit in Glasgow this November.

Australia has vowed to achieve carbon neutrality but the pledge is not law and the commitment is only to “preferably” achieve it by 2050.

“Which is great step forward when you consider the situation Australia is in,” Johnson said.

“It’s a massive coal producer – it’s having to change the way things are oriented and everybody understands that.”

He did not directly respond to whether the Morrison government’s target of reducing emissions by 26-28 per cent by 2030 was enough.

But he cited the UK’s effective phasing out of coal as an example of what Australia could achieve.

As COP26 host, Johnson has spent the year rallying advanced economies over their climate policies to make sure the world meets its Paris accord target of limiting global warming to 1.5 degrees.

Australia has been under pressure from allies – particularly Britain, the United States and France – to make deeper emissions cuts sooner.

“I’m impressed by the ambition of Australia,” Johnson said.

“Obviously we’re going to be looking for more for the whole time as we go into COP26 in November.”

Johnson also backed Morrison’s view that emissions cuts would be achieved only through technological advances.

“We want to work with Scott, with Australia, on the clean-tech solutions because I think what we both strongly believe is that you can have a green industrial revolution that drives high-wages, high-skilled jobs.

“You can do both and that’s what we’re going to work on together.”

Morrison attended the G7 leaders’ meeting in England at the weekend where the US, UK, Canada, France, Germany, Italy and Japan vowed to “achieve an overwhelmingly decarbonised power system in the 2030s”.

As an invited guest, he was not required to sign the statement but said he had come under no pressure at the summit over the government’s climate policy.

He pledged to “ensure that the jobs of Australians, the price of their electricity, it is affordable and reliable, the lights staying on and we address these environmental challenges, our regions thrive and our heavy industries come through”.

However, he also conceded a carbon neutral economy would be “a reality”.

“The new energy economy is coming. It’s a reality. You’ll see it working through financial markets.

You’ll see it through working through so many different areas of the financial system.“