International arrivals going into Victoria’s rebooted hotel quarantine program can apply for their detention to be reviewed by a panel of lawyers within 24 hours.

The Age has confirmed the government has been on a recruiting blitz to source lawyers with more than 10 years of experience to act as detention review officers. 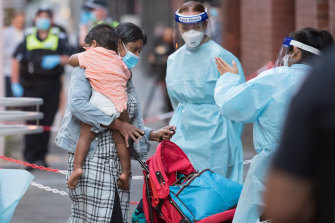 The new review process has been brought in following recommendations from the Coate inquiry, which found repeated failures in the first version of hotel quarantine resulted in coronavirus spreading into the community, sparking Victoria’s deadly second wave last year.

The Department of Health said from next Tuesday, people in hotel quarantine can apply for their detention to be reviewed by independent lawyers who decide whether the detention arrangements are necessary to protect the public health of Victorians.

Under the changes to the legislation, the Health Department secretary must send the application immediately to the detention review officers, who then decide whether detention is necessary, or refer the application to the Chief Health Officer who makes the final decision.

Changes to the Public Health and Wellbeing Act

The entire process is supposed to take less than 24 hours.

Human Rights Legal Centre’s legal director Daniel Webb said the introduction of review officers was a safeguard to ensure the extraordinary power to detain people was used fairly and reasonably, and contained avenues to raise individual circumstances and vulnerabilies.

“As with all the ongoing emergency powers that the Victorian government has access to, there must be continued scrutiny and oversight of how they are used in practice,” Mr Webb said.

According to the legislation, people detained in hotel quarantine can make more than one application if they can show that new and materially different circumstances have arisen.

The department is urging international arrivals who want to apply for an exemption to contact them well in advance of their intended arrival date. Exemptions, which can be applied for using the online form on the department’s coronavirus website, can be granted for reasons including medical, on compassionate grounds for interstate travellers, as well as to unaccompanied minors, foreign diplomats and maritime crew members.

If the exemption isn’t granted or if an international arrival isn’t satisfied with the department’s decision, they can then apply for detention review officers to assess their situation after they’ve arrived in Victoria, the department said.

The first of the returned travellers and expats to go into the state’s rebooted hotel quarantine arrived last Thursday, after the program was shut down for a second time in mid-February after a new strain of COVID-19 leaked from a quarantine hotel. As of Monday morning, there were two cases in hotel quarantine.

Outbreaks in hotel quarantine in May and June last year sparked the state’s deadly second wave and caused the program to be suspended the first time around. 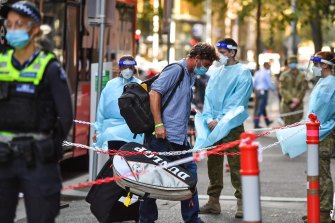 A man arrives at hotel quarantine on Thursday morning.Credit:Joe Armao

Justice Jennifer Coate’s inquiry into the disaster found the process for exemptions was neither clear nor consistent and recommended a transparent and prompt exemption process that included legal advice that took into account not only the public health considerations but also the human rights charter.

The inquiry heard at times harrowing evidence about returned travellers who were kept in quarantine when it was neither appropriate nor safe.

A nurse working in hotel quarantine told the inquiry a returned traveller with serious mental health concerns was twice taken to the emergency department, only to be sent back into quarantine.

A new mother who came back to Australia escaping family violence was told she was granted an exemption to stay in a ‘mother baby unit’ after two days in quarantine. She told the inquiry when she rang the unit, they hadn’t heard of her and her exemption was revoked before being reinstated again.

“I understand the need for quarantine, but the cost of this program was too high for some people,” she wrote.

“For me, the mental impacts were devastating. I had just escaped domestic violence and to be locked up again was very difficult.”