Acting Premier James Merlino has stood by the decision to run a safe injecting room next to a primary school in Richmond after emotional parents addressed a residents’ meeting on Wednesday night.

More than 100 residents met at the All Nations Hotel opposite the facility in Melbourne’s inner-east, urging the state government to move the injecting room away from Richmond West Primary School. 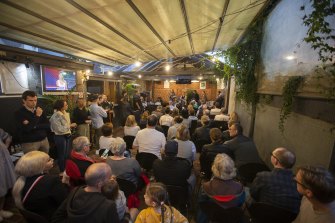 Mr Merlino said on Thursday the facility saved lives and was supported by the school community.

“My message to the whole of the community of North Richmond and the broader Victorian community [is] these are challenging and confronting issues, and they have been for decades in this community,” he said.

“It works. It works, it saves lives and protects people.”

A review of the two-year trial last year estimated that between 21 and 27 lives were saved in the first 18 months.

The government has extended the trial for another three years as Ken Lay, the former chief commissioner of Victoria Police, leads consultations.

However, the facility continues to divide residents and school parents, many of whom want the injecting room moved from its current location next to the primary school.

A body was discovered outside the school, and a man was arrested after allegedly trespassing on school grounds armed with a knife in separate incidents last week.

Parent Josie Carberry said the events of the past two weeks had left parents “horrified, but not surprised”.

“My kids, like other kids, have seen things that no kids should see,” she told the meeting on Wednesday.

Mr Merlino said as Education Minister he was constantly engaging with the primary school’s principal and community and the advice he received was that the number of syringes found in the area and incidents at the school had decreased.

“I know this is challenging, I know it’s confronting, but it’s been the reality in North Richmond for decades.”

Mr Merlino said the location was selected because of the concentration of drug activity in the area.

No government MP attended the resident meeting on Wednesday night.

Instead, Mr Merlino attended the state memorial service for music legend Michael Gudinski, the founder of the Mushroom Group, as did Health Minister Martin Foley.